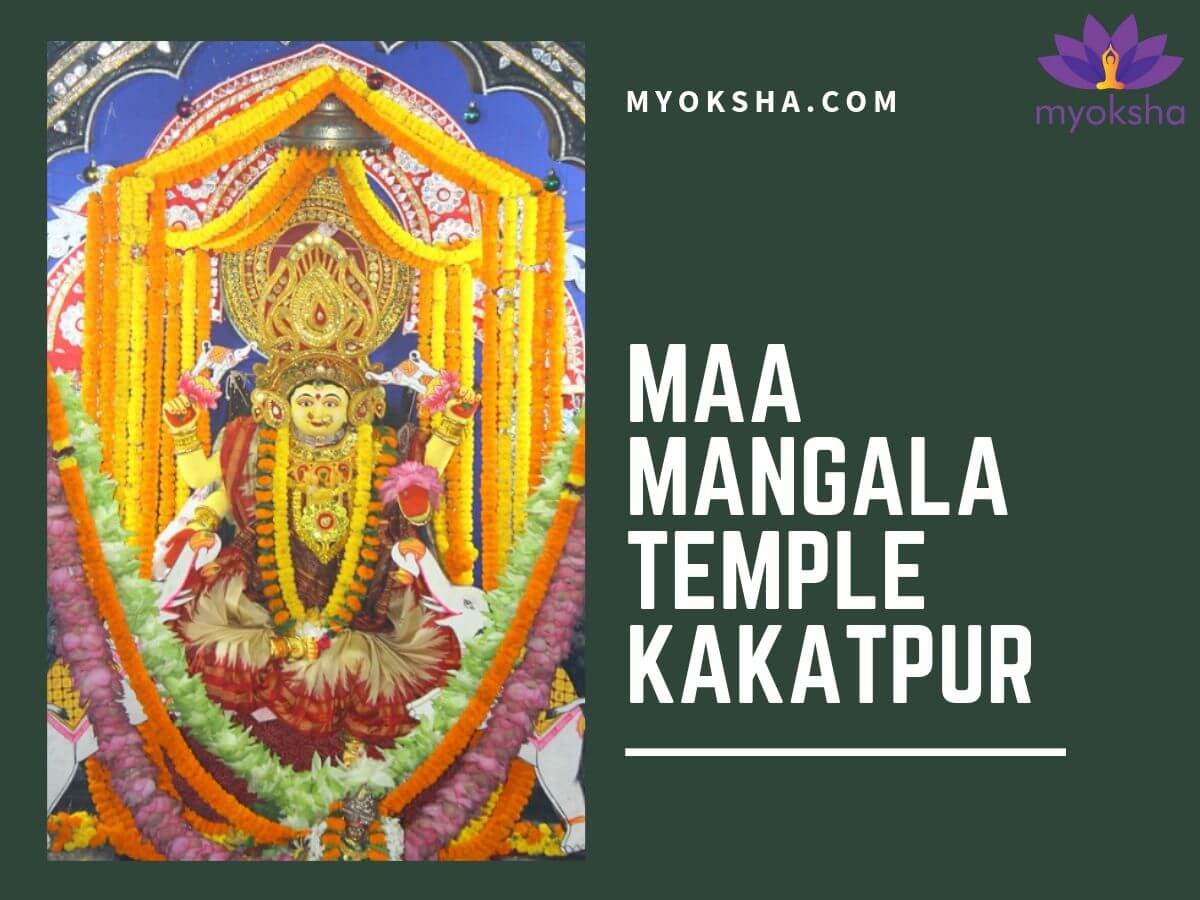 Maa Mangala Temple is located in Kakatpur in Puri in the Indian state of Orissa. Kakatpur is a small village in Puri District and is situated at a distance of 50 kms from Puri. There are large number of devotees who visit the temple each month. This temple is associated with Puri Lord Jagannath temple.

During the renovation of the deities which is known as Navakalebara, the old deities are buried at a dedicated place in the Jagannath temple and the new idols are shaped for Lord Jagannath, Lord Balabhadra and Goddess Subhadra. The idols are also made from a very sacred wood which is the Daru Brahma. Nobody knows from where to find the sacred wood to create the new idols, so as per the tradition the priests of Lord Jagannath temple come to Kakatpur Mangala to pray the Goddess to help them to find the sacred wood. The priests sleep in front of the Goddess with their face down and then Goddess Mangala come in their dream and tell the exact location of the three sacred trees for the three deities.

Maa Mangala Temple remains open on all days of the week. The timings of the temple are from 9:30 AM to 1:30 PM in the morning and from 4:30 PM to 7:30 PM in the evening. In case of special occasions or festivals, the timings might differ.

Significance of the Maa Mangala Temple

Mangala is Arupa (formless) and has become Sarupa (took form). Throughout the year, and days the ‘Niti’ ‘Puja’ is being done in ritualistic manner. ‘Prasadams’ are available for the devotees. Many patients come to remain in “Dharana” in prostrate form to get themselves cured.

Jhamu Yatra: Jhamu Yatra is the most popular festival of Goddess Mangala which falls on the first Tuesday of the Vaisakh every year. On this occasion devotees collect water from river Prachi and pray to get her blessings. Then with the mud pot, filled with water, on their shoulder, they are able to walk on the surface of burning fire spread on a long channel on bare feet. Due to their faith on Goddess Mangala and her blessings on them, the devotee are unhurt and uninjured while performing such a risky custom. Every year thousands of devotees come to Kakatpur to celebrate the Jhamu festival.

Maa Mangala Temple has a close relation with Lord Jagannath Temple of Puri during the Navakalebara (Renovation of the Deities) festival. The new idols are created from a sacred wood known as “Daru”. As per the tradition the priests of Lord Jagannath temple come to Kakatpur Mangala to pray the Goddess to help them to find the sacred wood. The priests visit the goddess and offer her the things brought for the Banajaga Yatra and then Goddess at night shows the direction of the sacred wood or daru in their dreams. This custom has been performed from years together without any deviation. This shows the power and energy of Goddess Mangala and her blessings for her devotees.

Dhanu Yatra: It is a popular drama festival held at Bargarh of Western Odisha. The play is the enactment of the story of Lord Krishna and his demon uncle King Kansa. It features the Lord’s visiting Mathura for witnessing the ceremony of “Bow” or “Dhanu” organized by evil Kansa. The play continues for 7 to 11 days and attracts large number of viewers. Dhanu Yatra is celebrated for eleven days of the month from the 5th day of the bright fortnight till the full moon day.  The festive mood of people made them enact the victory of Lord Krishna, the embodiment of truth, justice and righteousness over Kansa who personifies arrogance and wickedness. The epic play was just a symbolic representation of Indians victory over unfair British rule.

By Air: Nearest airport from this temple is the Bhubaneshwar airport which is 65 Km from this place. Bhubaneswar is connected by air with flights to major Indian cities like New Delhi, Calcutta, Visakhapatnam, Ranchi, Chennai and Mumbai etc. All major domestic airlines like Air Deccan, Jetlite, Kingfisher, Indian Airlines have daily flights to/from Bhubaneswar. The nearest International Airport is at Calcutta (Kolkata).

Some of the important trains from New Delhi

1) Purshottam Express Leaves New Delhi on Day 1 and arrives at Puri on Day 3 (the distance is about 1866 kms) journey Time approx 31 hours.

2) Puri Express Leaves New Delhi on Day 1 and arrives at Puri on Day 2 (the distance is about 1794 kms) journey Time approx 30 hours.

3) Neelachal Express Leaves New Delhi on Day 1 and arrives at Puri on Day 2 (the distance is about 1910 kms) journey Time approx 35 hours.

By Road:  Kakatpur Mangala Temple is 50 Km from Puri. The bus stand near the Gundicha Temple provides connections to Bhubaneswar and Cuttack, service every 10-15 minutes. Minibuses to Konark leave every 20-30 minutes and also from Jatiababa Chhak. There are direct buses for Kolkata and Visakhapatnam. Puri is linked with Bhubaneswar by state highway no.8 and Bhubaneshwar is situated along the National Highway no.5 connecting Chennai and Kolkata. The best way to go from Bhubaneswar to Puri is on one of the State Govt. buses, mini buses and tourist buses leaving from Bhubaneswar main bus stand.

There are many good hotels and resorts available near Maa Mangala Temple for the accommodation.

There are numbers of local dhabas (food-joints) serving vegetarian and non-vegetarians food. Apart from relishing the local delicacies, fish fry prepared in Bengali-style is highly suggested. Apart of Indian cuisines, continental and chinese dishes are also available at an affordable rate.

Shri Jagannath Temple: The origin of the sacred shrine of Jagannath goes back to the pre-Vedic period and Purusottam Kshetra, the sacred abode of Sri Jagannath, has been described in various Sanskrit works, such as the ‘Padma Parana’, ‘Narada Purana’, ‘Matsya Parana’, etc. There is a  monumental and magnificent Shrine at Shri Purusottam-Kshetra (Puri, Orissa) one of the four major Dhamas of India. The cult of Jagannath came to be regarded as the religion of masses ‘Gana Dharma’. That means Jagannath cult is a unique cult. Indian culture has reached its culmination in the unique culture of Lord Jagannath. It is more than a cult — an all-embracing synthesis of cults. It has combined diverse faiths, cultures, creeds and ideologies.  He is also known as Jagabandhu. He is the friend, philosopher, guide and the anchor of the purest thoughts of the people of the entire Universe.

Shree Lokanath Temple: Lokanath Temple is ranked next to Shri Jagannath Temple.  This  temple  is  at  a  distance of  about  two  kilometers to  the  west  of  the  Shri Jagannath Temple. Lord  “Siva”  and  “Mata  Parvati”  are  the  main  deities of  the  temple. The unique feature is that the shivalinga is always under water which substantiates the legend that Goddess Ganga flows through the top of the shivalinga as a stream.  Lord   Rama constructed    the temple in “Tretaya Yuga”.

Konark Sun Temple: Konark is one of the well known tourist attractions of Orissa. Konark houses a colossal temple dedicated to the Sun God. Konark is one of the most famous tourist destinations in India from the spiritual standpoint and boasts of one of the best known architectural specimen. The tourists coming to Konark also visit the Chandrabhaga Beach, one of the most exotic beaches in Odisha. The konark city is also known world over for its fairs and festivals. Millions of devotees gather here to take a holy dip in this river on the occasion as this dip is believed to be a sure cure for all illnesses.