Panchalingeshwar Temple is in Balasore district of Orissa. Panchalingeshwar Temple is situated on the hilltop of the Eastern Ghats in Panchalingeswar, Nilagiri, Balasore district of Orissa. The Shivalingas are said to have been enshrined by Sita, the wife of Lord Rama during their exile. Pachalingeswar temple is  situated in Western ghat of odisha near Nilagiri hill. A beautiful flowing stream, which is the real attraction of the area, regularly flows over the Shivalingas. On reaching the top one has to bend down, and search for the Linga’s inside a pool created by the waterfall. It is said that there are 5 linga’s – hence the name Panchalingeshwar. Tourists are  attracted by the village of Panchalingeswar to visit the Panchalingeswar temple, the shrine of Lord Shiva.To touch the lingas one has to lie flat on a rock and get a feel of the lingas. The temple one can also savor the spectacular sight of small tribal villages and hamlets as you trek through the forests of the Nilagiri.

One has to climb 263 stairs in order to reach the Panchalingeshwar Temple. The stream and waterfall grow in size during the monsoons and the Pancha Lingas becomes difficult to locate by hand. The approach to the temple is scenic as it is surrounded by a forest. Visitors can also go to  Sajanagarh, near to Panchalingeshwar, to see the Budarachandi temple.  As the name implies Panchalingeshwar is famous for its unique ‘panchalinga’ or the five lingas of Lord Shiva enshrined in the temple. If you love trekking, then one can trek at the Nilagiri Hills. Enjoy your trips in the nearby sightseeing places. 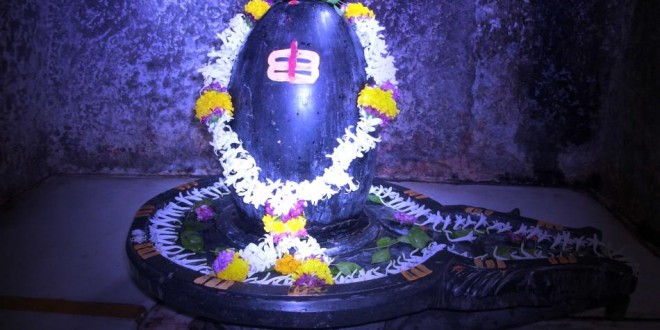 Significance of the Panchalingeshwar Temple

The small waterfall becomes bigger during the monsoons and the 5 rock piece kind of formation called the Pancha Lingas becomes difficult to locate. To reach to the sanctuary one needs to lie level on the stone parallel to the stream to touch and love the Lingas inside the water stream.

By Air: The Nearest airports are at Bhubaneshwar 294 km and at Kolkata, 206 Km.Land at Bhubaneswar airport and travel to Balasore via Bus.

By Rail:  Balasore is the nearest railway station. One can reach to the Baleswar Railway Station and then easily reach to the temple area.

By Road: Buses for Panchalingeswar are available from Balasore, Baripada, Chandipur, etc. Taxi, car transport is also available from these towns. It will take 30 minutes /45 minutes through hired taxi.

One can stay at Govt. accommodations in Panchalingeswar, which is operated by the Orissa Tourism Department Corporation. There are also a few standard hotels and private resorts at the location. Good hotels are available in Balasore town. The Panthanivas at Panchalingeswar also provides accommodation for visitors. For Reservations, contact: Tourist Officer, Balasore, Near Police Line.

There are varieties food are available here, which is very delight & tasty. All the restaurants typically provide with Bengali , Oriya,Western ,Chinese & South Indian Dishes.There are many restaurants located close to and around the Chandipur Beach that offer the best of dishes and other Indian cuisines. Some other popular eating joints around Chandipur Beach are Fantasy Restaurant and Rainbow Restaurant.

Langaleswar: The location of the temple by the side of river parvati too creates a scenic beauty and makes another attraction of the place. It is the location where Lord Shiva used to plough the paddy field. In memory of the same plough is there and  hundreds of pilgrims use to gather there to worship the Lord Langaleswar who has been named after that plough. Langaleswar is famous for  Saivasim.

Bhudharchandi temple: The ancient Bhudhar Chandi Mandir (a temple of Goddess Chandi) that attracts a large number of tourists. The Bhudhar Chandi Mandir is situated in a small village known as Sajanagarh close to the town of Nilgiri and about 15.7 km from the town of Balasore. It is about 13 km from the Sergarh junction on NH-5. Historical evidence gathered from this place shows that the temple was built and established by the Nilgiri king Shri Vasanta Virata Bhujanga Mandhata who ruled during the years 1421 B.C. and 1464 B.C.

Baleswar Temple: The principle Baleshwar sanctuary is devoted to Lord Shiva (who is otherwise called Baleshwar). There are two different sanctuaries in the compound of Baleshwar, one committed to Ratneshwar and other to Champawati Durga. The sanctuary is based on South Indian Architecture with wonderful Stone Carving works. Near to the Baleshwar Temple is a “Naula” (Fresh water asset) which has now become scarce. Upon the arrival of MahaShivRatri, an exceptionally packed reasonable is held in the Baleshwar Temple compound.

Akhandalamani Temple: The Holy Shrine Siva Lingam Baba Akhandalamani is situated in the river bank of Baitarani at Aradi Village of Bhadrak District. It is one of the ancient Shaiva Pitha of Odisha and famous as Mani Baba both in Odisha and outside. There are many fairs and festivals observed at the temple of Baba Akhandalamani. But Maha Shivaratri is the best among them. This festival is locally known as Jagara Mela. On this day pilgrims and devotees from all places of Odisha are assembled here to worship Akhandalamani at Aradi.

Biranchi Narayana Temple: It is located 15 kilometres (9.3 mi) south of Bhadrak, on the way from Bhadrak to Chandabali.  The existing temple is dedicated to Biranchi-narayan, who is enshrined as a roughly four-faced image of the Sun. A square stone slightly tapering towards the top contains four carved images of the Sun god in relief.  This is the one only one temple of Lord Brahma who is the creator of the World.

Chandipur Beach: Chandipur Beach is situated under the district of Balasore in the state of Orissa. It is located on Bay of Bengal coastline, the beach attracts travellers from India and different parts of the world. One of the unique features of Chandipur Beach that sets it apart from other beaches of the state is the variance of water level owing to the tides. The place is an ideal weekend retreat for the crowd in the nearby cities who want to get away from the stress of city life.

Devikund Waterfalls: The name suggests Devkund (where god takes bath) water falls into a Kund or pool which is believed to be a sacred pool. In all, there are 5 waterfalls which fall into Kund and thus the place also named as Pancha Kunda. These 5 waterfalls are Amrit Kund, Ghrita Kund, Haladi Kund, Devkund and Devi Kund. At 100 steps above the waterfall near the river source sacred temple of Devi Ambika is located. It is a part of the Udala division of Similipal Forest via Nilagiri/Udala from Panchlingeswar. It is 75 km from Panchalingeswar, 69 km from Kuldiha and 87 km from Balasore.

Kuldhia: This sanctuary is located in the district of Balasore and is blessed with a charming forest and a variety of wildlife such as tiger, leopard, elephant, gaur, sambar, giant squirrel, a number of bird species like leaf-bird, hill myna, peafowl, hornbills and various reptiles. Some cycus plants and surprisingly very few mangrove trees also could be seen at Gudikhola area. The Kuldiha Forest itself is the best attraction to watch out for. The forest is also the home to Tenda Elephant Sanctuary and a Lion Sanctuary.