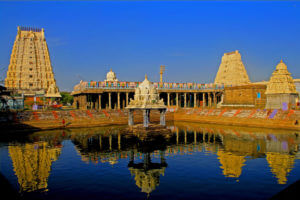 The Ekambareswarar Temple in the town of Kanchipuram in Tamil Nadu is one of the Pancha Bhoota Stalas. It is dedicated to the element of earth, or Prithvi.  Lord Shiva is Ekambareswarar or Ekambaranathar here represented byPrithvi lingam. Moreover, Devi Parvati is depicted as Gowridevi Amman.

The other four temples in this category are Thiruvanaikaval Jambukeswara (water), Chidambaram Natarajar (ether), Thiruvannamalai Arunachaleswara (fire) and Kalahasti Nathar (wind). Further, all of the four famous Shaivite Saints have sung the glories of this temple. Srikalahasti temple is famous for it’s Rahu Ketu Dosha Remedy.

What is the history of Ekambareswarar Temple?

History of Ekambeswarar temple says that Pallava Kings built a part of the temple. However, the rest of it was built in the 17 th century. This temple is one of the most ancient in India. Also, Second century AD Tamil poetry speaks of Kama kottam, and the Kumara kottam.

Initially, Pallavas built the temple. The Vedantist Kachiyapper served as a priest at the temple. Then, the Chola Kings rebuilt the entire structure. Also, Adi Sankara, the 10th-century saint remodelled kanchipuram along with expansion of this temple.

The Vijayanagar kings also made a lot of contributions to the temple. Vallal Pachiyappa Mudaliar used to go regularly from Chennai to Kanchipuram to worship in this temple. He also spent a lot of money on the temple’s renovation. The temple pillar contains an image of Pachiyappa Mudaliar seated at horseback.

According the devotees, there is a legend around the temple. Some say that once while Lord Shiva was meditating Parvati mischievously covered his eyes with her fingers. It resulted in complete darkness on earth for many years. As a result, Parvati went to earth and created the earth linga and worshiped it under a mango tree in Kanchipuram giving birth to the temple.

What is the significance of Ekambareswarar Temple?

The significance of the Ekambeswarar Temple is that it is the 1st of the 32 Tevara Stalam built in the Tondai region. It is the largest Shiva temple in Kanchipuram. A Somaskanda panel featuring Shiva, Parvati and Skanda together adorn the back end of the main shrine.

In 1509, Krishna Deva Raja of the Vijayanagara kingdom built a 60 meter high Gopuram.

The temple premise also has a 540 pillar hall, beautifully designed and carved. The Vijayanagara Monarch constructed the pillared hall.

A 3500 years old mango tree adores the sanctum having four branches each dedicated to the four Vedas. Moreover, the Deity derives its name from the Mango tree from the words Eka-Amra-Natha, meaning the Lord of the Mango tree. The path to the tree also has a Shiva Lingam made of around 1008 small lingas.

What are the timings of Ekambareswarar Temple?

The timings of Ekambeswarar temple are:

Which festivals are celebrated at Ekambareswarar Temple?

Some of the festivals celebrated at Ekambeswarar temple are:

How to reach Ekambareswarar Temple?

Where to stay near Ekambareswarar Temple?

Some places to stay near Ekambeswarar temple are:

What are some temples near Ekambareswarar Temple?

Some of the temples near Ekambeswarar temple are: