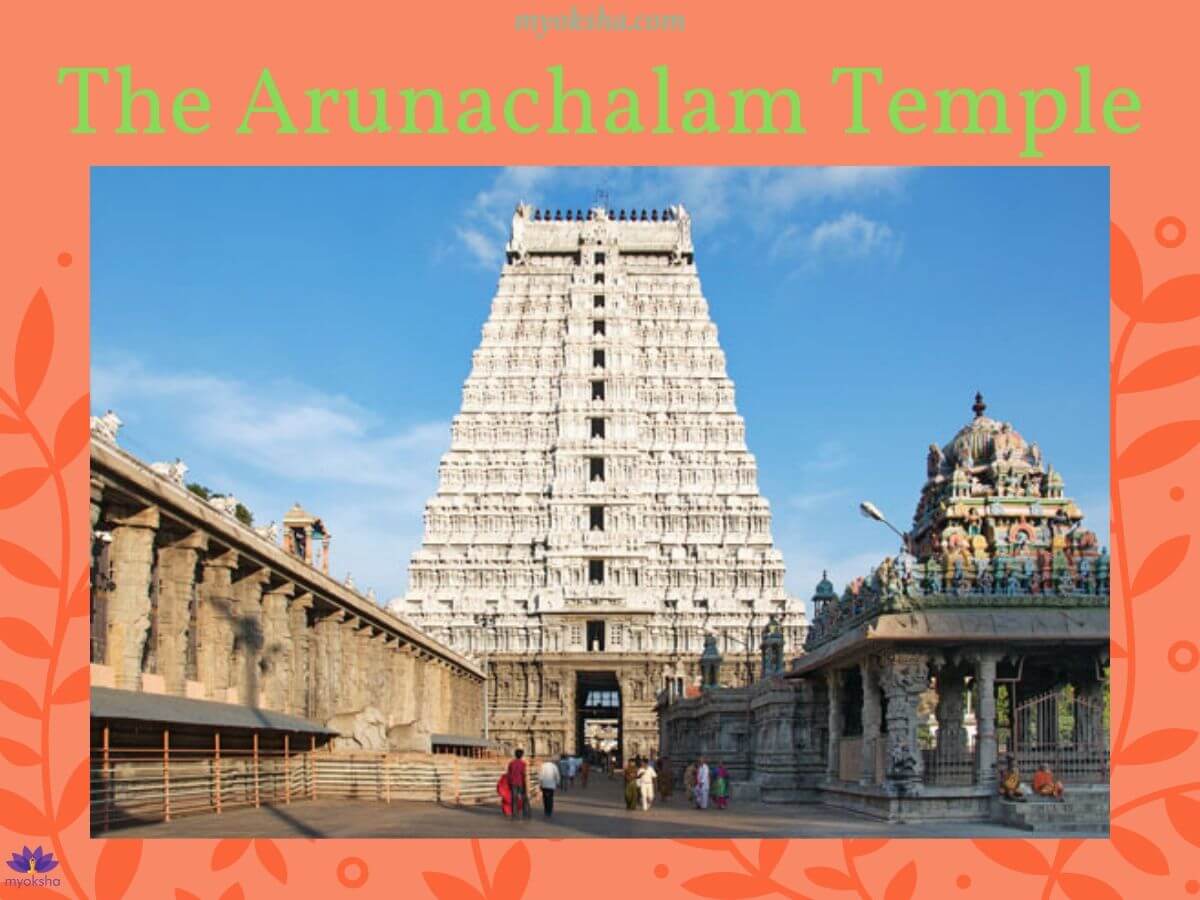 Arunachalam Temple is an important Shaivite temple dedicated to Lord Shiva. Located in Tiruvannamalai in Tamil Nadu, this temple belongs to the list of Pancha Bhoota Stalam (the five Shiva temples dedicated to the five elements of nature). The presiding deity is in the form of Agni Lingam (fire element).

In this guide, you will find out about Arunachalam Temple timings, history, poojas, significance and how to travel to Tiruvannamalai.

Arulmigu Arunachaleswarar Temple and Annamalaiyar Temple are the other names of the temple.

What are the timings of Arunachalam Temple?

Here are the darshan timings of Arunachalam Temple:

What are the poojas and sevas performed at Arunachalam Temple?

Here’s the list of sevas and poojas at Arunachalam Temple:

What is the significance of Tiruvannamalai Temple?

The significance of the Arunachalam Temple is that it is the largest Shiva temple in India. Girivalam, or circumambulating the sacred hill is an important spiritual activity. The significance of this activity is that the walk relieves the devotee from his sins and the cycle of birth and rebirth.

The presiding deity is Annamalaiyar or Arunachaleswarar and his consort is Unnamalaiyar. Important Tamil literature such as Thevaram and Thiruvempavai by the Nayanars mention the Tiruvannamalai Arunachalam Temple.

This temple and temple town is considered to be rich in spiritual heritage. The area is concentrated with several ashrams and samadhis dedicated to saints and spiritual leaders from all over India. Devotees and followers from different nationalities have made this place their spiritual home.

The Tiruvannamalai Arunachalam Temple, sacred hill and surrounding areas are known to give off strong positive vibrations and even today some also claim to have sighted ancient Siddhas or holy men deep in meditation.

Devotees believe that Lord Shiva established himself as Jyotirlinga in the sacred hill behind the Tiruvannamalai temple. So they do Giri Pradkshina around the hill and pray to the god. Devotees cover a distance of nearly 14 km on barefoot and worship at the numerous temples, lingams and shrines that are present along the path.

You can do the Giri Pradakshina at any time on any day. The best time is to start around midnight and complete it by morning 4 am. At 4:30 am there is a special darshan in the temple where they let sacred cow through the temple doors. A lot of devotees also prefer to do giri pradakshina on Pournami (full moon day).

What is the history of Arunachalam Temple?

According to history, Goddess Parvati once playfully closed Lord Shiva’s eyes and the universe plunged into darkness. Realizing her mistake, she performed penance and Lord Shiva manifested himself as a column of fire atop a hill. The column became Agni Lingam and the hill became popular as Tiruvannamalai.

Another legend says that Lord Vishnu and Lord Brahma once competed against each other to decide who is the greatest. Then they requested Lord Shiva to be the judge. Lord Shiva set the challenge – the one who reaches his crown and feet first will be the winner. He then took the form of a long column of fire or the Agni Lingam.

During the ascent, he saw a flower – the Thazhampu, fall from the crown. He then asked the flower how long he should fly to reach the crown. The flower replied that it had been falling for thousands of years and still hasn’t reached the ground.

Ever since Lord Brahma has no temples dedicated to him, and people don’t use Thazhampu for worship. This story is in the Lingothbhava and Tiruvannamalai Arunachalam Temple murals.

The Tiruvannamalai Arunachalam Temple construction dates back to several thousand years. Chola Kings built the temple in the 9th century according to the inscriptions.

What are the festivals celebrated at Arunachalam Temple?

Since Lord Shiva is in the form of Agni here, the festival of Karthigai Deepam celebrated in the Hindu month of Karthigai is of great importance. It’s a ten-day festival that falls between November and December and culminates in the lighting of the Mahadeepam on the Tiruvannamalai hill at sunset.

Also, crores of devotees flock to the temple each year on this date and donate offerings of tonnes of ghee and oil to light the magnificent lamp.

Chitra Pournami or the first full moon day of the Tamil Calendar is also an important festival day here. The five sacred temple cars carrying the deity are brought out in a procession on that day.

How to reach Arunachalam Temple?

Here’s how to reach Arunachalam Temple:

Where to stay near Arunachalam Temple?

There are several ashrams and charitable endowments that provide lodging at a very nominal tariff. You can also find modern accommodation options near Arunachalam Temple in recent years. One should book the hotels in advance if you are planning on travelling during festivals or weekends.

Where to eat near Arunachalam Temple?

Most of the hotels that provide accommodation also have restaurant options. You can also find other standalone restaurants near the main bus stand and the temple. Always eat clean and neat food and make sure you are staying healthy. Drink only clean water and wash your hands thoroughly before eating.

What are some temples near Arunachalam Temple?

Is the Arunachalam Temple open throughout the year?

Yes, the Arunachalam Temple is open all 365 days of the year.

The entry to the Arunachalam Temple is free of cost.

The summers in Chittoor starts from April and continue until June. The summers here can be very hot and humid. Temperatures during the daytime often go up to 42 º C.

If you have any questions about Arunachalam Temple, please leave your comment below and we will get back to you within one hour.