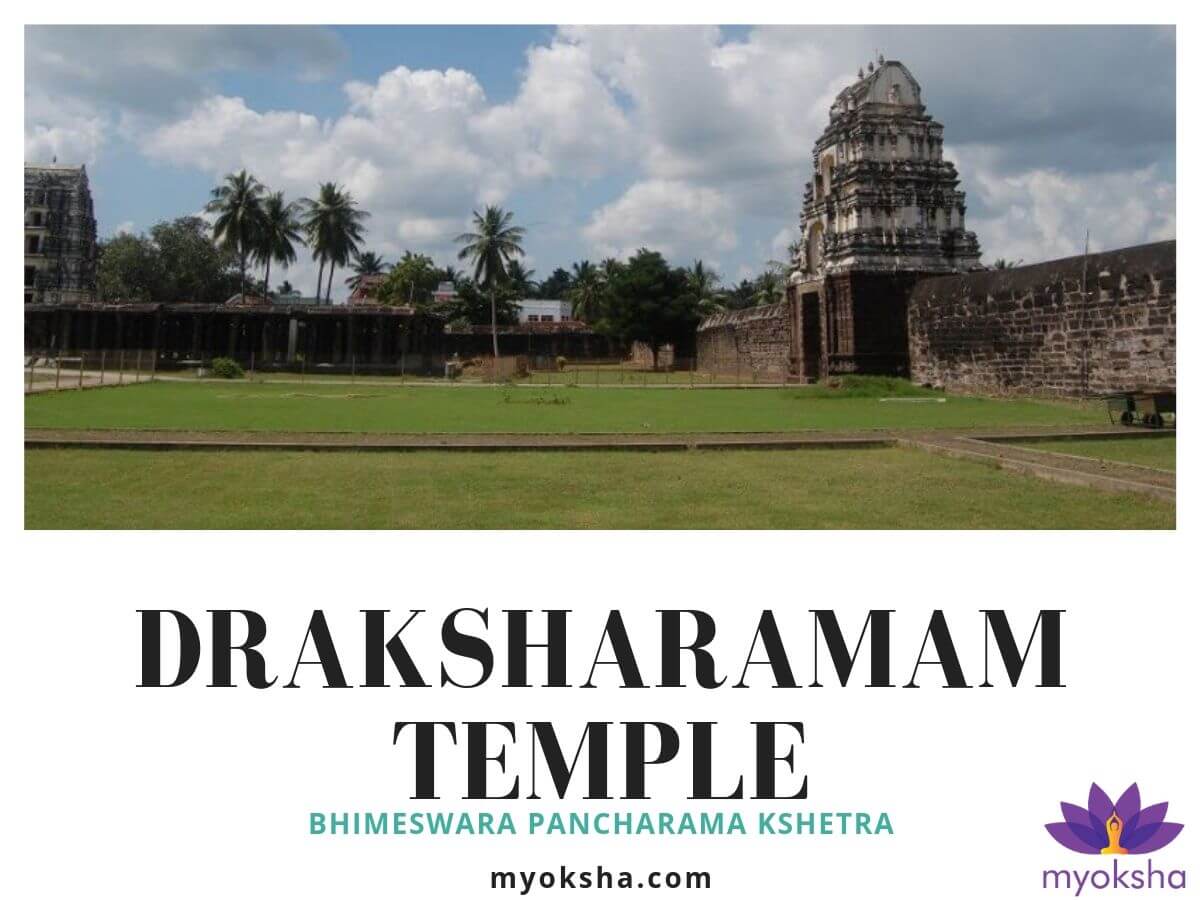 Another popular name of the temple is Dakshina Kasi Kshetram. The literal translation of Draksharamam is ‘Abode of Daksha Prajapathi’, the father of Sati and the father in law of Lord Shiva. Sati was the wife of Lord Shiva. The Draksharama Temple is one of the Five Powerful Temples of Lord Shiva which are known as “Pancharamas” in Andhra Pradesh.

Bhimeswara Swamy temple or Draksharamam temple is 25 km from Amalapuram and 28 km away from Kakinada on the Eastern bank of Godavari River. The ‘Skanda Purana’ of Shri Vyasa exhaustively describes the history of this pilgrimage destination. According to mythology, when Dasksha decided to perform a Yagna, he made a trip to Kailash Parbat. He did so with an intention to invite the Gods and Goddesses to grace the occasion and sanctify the ‘Yagna’.

However, the Lord was in a spiritual trance and did not realize that he had a visitor. Dasksha mistook this as being indifference on Lord Shiva’s part and returned without inviting the Lord and Sati. In spite of not getting the invitation, Sati expressed her desire to attend the pooja to the Lord. The Lord warned her that she will not be welcomed in her home but when Sati insisted, he let her go. As expected, Sati was not greeted warmly in her father’s house and everyone gave her the cold shoulder.

Humiliated by this, Sati decided to give up her life instead of returning to her husband with a fallen face. She dropped down dead in her father’s house. When Shiva learnt about this tragedy, he sent his son Veerabhadra to break Daksha’s ego and he himself came down to Daksha’s home. Veerabhadra, along with other Siva Ganas, including Kali, brought down Daksha and destroyed the Yajna. Lord Shiva carried Sati’s dead body over his shoulders and danced the ‘Pralaya Thandava’ or the destruction dance.

At this moment, Lord Vishnu descended and in order to redeem Lord Shiva’s grief, he cut down Sati’s body into 18 pieces with his ‘chakra’. The places on earth where the 18 pieces fell came to be known as the ‘Ashta Dasa Peethas’ and Sri Manikyamba of Draksharama is the twelfth of them and it is believed that the left cheek of Sati fell here.

Draksharamam Temple building is two storied and resembles a fort. There are 2 “Prakarams” or paths; outer and inner. The outer path has four entrances coming from four different directions. Each entrance has the most intricately carved Gopurams and is known to be in 4 different forms of Goddesses i.e. Gogulamma, Nookambika, Moodhambike, GhattambikeIn.

The main deity of the temple is Lord Bheemeswar Swamy, in the form of a 2.6 mts tall Shiva Lingam (the tallest Shiva Lingam in the world) which is made of crystal and has black stripes on the upper portion. Legend has that these stripes were the markings of the tiger skin that Lord Shiva was wearing when he found with Arjun under the disguise of a hunter. The early morning sun light falls directly on the Shiva lingam. Visitors can take a flight of steps towards the upper level of the Sanctum to see the upper structure of Lord Bheemeswar Swamy.

Towards the back side of the temple is the shrine of Manikyamba Devi in the left corner. The Goddess is looking towards the left which signifies her as Vamachara Devatha.

Lord Vishnu, present at the draksharamam temple with his consort Lakshmi Devi, is the Kshetrapalaka of Draksharamam. His shrine is at the entrance of main Temple.

There are other smaller shrines inside the main temple. Some of them are Praakara Bhairavudu, Viroopa, Natarajeshwar, Vaamana, Visheshwara, Dancing Ganapathi, Dundhi Ganapathi, Goddess Kanakadurga and Goddess Annapurna. The Kashi Vishweshwara Swamy temple faces south and is on the right side of Bheemeshwara Swamy temple.

The water from the Sapta Godavari Kundam (seven Godavari pond) is very sacred and is used for performing pooja. According to mythology, “Saptamaharishis” or the Seven Sages divided the Godavari River into seven streams in an attempt to end their penance. Of these seven streams, Draksharamam, Bharadhwaja, Viswamitra and Jamadagni streams known as the “Antarvahinis” and are believed to have gone underground. Later, these streams merged into a pond which is now known as Sapta Godavari Kundam.

The draksharamamam temple’s history can be dated back to the thirteenth century and it is one of the ‘Pancharamas’. It is an ancient and a holy pagoda and is a protected monument today. It is visited by thousands of devotees of Lord Shiva and Goddess Sati.

The Archaeological Department of India as taken the responsibility of restoring and renovating the beauty of the structure. Because of the inscriptions and epigraphs on the temple walls, this place is a paradise of historians and epigraphists.

The inscriptions on draksharamam temple date back to the 9th and 10th centuries during the reign of Chalukya King Bhima. During this time, the dynasty was under the attack by the Rashtrakotas. According to the inscriptions, Chalukyas had to fight over 360 battles. There are over 400 inscriptions that date back to the 11th Later this region was ruled by the Chola and Kalinga dynasty.

Draksharamam Temple follows an ancient South Indian Architectural style. Draksharamam Temple structure consists of 2 mandaps along with two walls. The sanctum or the inner garbhaalaya consists of intricate decor and crafting which showcases the work of master craftsmanship and represents cultural grandeur of the contemporary era. The temple also serves as a library for students of archaeological architecture.

This inner sanctum of draksharamam temple consists of a pedestal which has been built for priests to perform their rituals. Aurangzeb, when he invaded the temple, plundered the diamonds that had been studded into the walls. Ever since then this sanctum remains dark as the diamonds acted as a light source.

Inside the temple, the ventilation and illumination are rather impressive and proves the sensibility of the contemporary architects of that time. One can feel the inflow of rejuvenating air and the lightning arrangements within the temple.

The inscriptions and scripts are written in Dravidian, Tamil, Devanagiri, Telugu scripts in Sanskrit and Telugu languages. The inscriptions speak of the Chola, Sathvahanas, Vijaynagara and Reddy dynasties that once ruled over this region.

The draksharamam temple has been constructed in an area of over 12 acres and is surrounded by tall walls. 26 Lords reside in the temple as a family. The visitors are welcomed by Dundi Ganapati and Natya (Dancing) Ganapati at the main entrance. The trunk of Ganapati faces to his right similar to the Ganapati in Kasi.

Poojas and Rituals at Draksharamam Temple

How to reach Draksharamam Temple?

In the Devasthanam, dormitories are available at a charge of Rs. 200.00/- per day. Devotees can also avail one of the two A.C. suites with attached Bathrooms at a cost of Rs. 700.00/- per day per suite. Other rooms are also available at reasonable prices and usually, the prices start from Rs.100 or 200 per day depending on the room sizes.

Right in front of the temple, a choultry is also available. Here the devotees can relax for some time and also avail food, free of cost. Accommodations arealso available in near cities like Kakinada, Samalkota or Rajahmundry and from these areas, one can take a day trip via the bus to Draksharamam.

In the front of the draksharamam temple is the Choultry where free food is available to all the devotees. There are other small restaurants located around the temple where local and South Indian food is available.