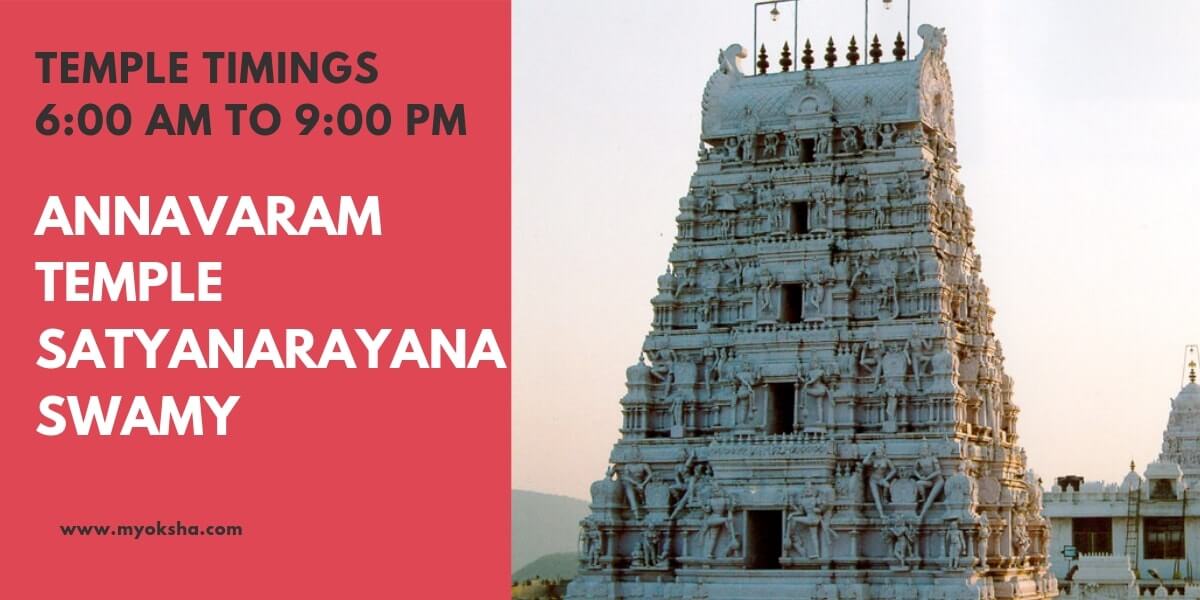 Annavaram Temple is one of the most popular holy shrines of the country and is the second most popular pilgrimage after the Tirupati Temple in Andhra Pradesh. The Satyanarayana Swamy Temple in Annavaram has been built in the Dravidian style. The richness and glory of Lord Satyadeva, the temple’s deity, is described widely in the Revakhanda of the Holy Skandhapuranam.

In Annavaram Temple, Lord Satyadeva sits with his consort Shri Anantha Lakshmi on one side and Lord Siva on the other side. The Lord took his abode on the Ratnagiri Mountain, named after Ratnakara who was the son of Meru, the holy king of the mountains. The Sri Satyanarayana Swamy at Annavaram is followed by the sacred Pampa River which is touching the feet of the hill as is the case with all Divyakshetrams.

Lord Satyadeva is the God of truth and he showers his eternal blessings on all humankind in his beautifully manifested form in the form of the divine trinity which is called Hari Hara Hiranyagarbhathrimurtyatmaka. Therefore, the temple is the only ones attracting pilgrims from both the Vishanava and Saiva Hindu religion.

The Veeravenkatasathya Narayana swami is the main temple on the hill dedicated to Sri Veera Venkata Satyanarayana Swamy. This is a temple of Sri Rama and there are shrines of Vanadurge and Kanaka Durga around. The Grama Devatha (village deity) temple is located in the village foot of the hill.

According to legend, Raja i.e. Ramarayanam was the then zamindar of the Gorasa and the Kirlampudi estates near Samalkot since he was ordained by Lord in his dream. He then traced the idol on the hill and worshiped and installed it at this spot on Sravanasuddhavidiya in the Telugu year khara 1891.

The temple was constructed on the hill and the Bay of Bengal situated at 11 miles is visible from the hill and row of the majestic Eastern Ghats is visible on other side. The hills and the Pampa River encircle Ratnagiri from all sides. The main hillock is about 300 feet above the sea level and there are about 460 well-laid stone steps that lead to the top.

The main temple has been constructed like a chariot that has four wheels at each corner. The main temple’s front has the modern architecture including a Kalyanamantapa. Down the way, there is a Ramalaya and then there are shrines of Vana Durga which is held in veneration and the Devi is believed to be seen there in the nights according to the holy precincts that a perpetually guard the lord.

According to the Agni Purana and the Hindu mythology, any temple’s akriti is the manifestation of its Prakriti.  In the ancient texts, the idea is developed and the Slipasastra is based on this principle. The temple’s wall and Vimana should be constructed to remind the devotee of the universe while the supreme spirit is represented by the deity inside who is the core of the entire universe.

These texts believe that the chariot is a symbol of seven lokas which lie underneath and the seven lokas that lie above along with garbhalaya of the lord rule hearts and center that rules over the entire universe.

The Annavaram Temple has been constructed based on these ideas. The temple’s front side depicts the chariot, the Meru is on the floor and the pillar is at the center. The idols at tope are constructed to bring to life the idea that Lord remains at the centre but it also permeates entire universe.

The wheels depict both the Sun and Moon and serve as a reminder us that the Jaggernaut completely moves on wheels of time and this cycle goes on forever. The Annavaram temple satisfies the devotees’ ritualistic values and spiritual aspirations.

There is a dial on the north side of temple’s compound that shows Indian standard time which is easy to calculate. A Mandapam is constructed round the main temple and a Kalyana mandapam on the lower level, that provides space to conduct about a thousand Satyanarayan Vrathams at one time and 500 Vrathams can be conducted by the side of Ramalya.

The foundation of a Galigopuram has been laid opposite to the Kalyanamantapam by left side which lies to the south of the compound wall.

The annavaram temple has also installed NavaGrahams and a bigger temple might be built for them in future. Down the steps, there are office rooms, guesthouse, a Choultry and open-air theatre used for HariKathas. The walls of the Vratha halls and the open air theatre have been painted with figures that represent the story of the deity Satyanarayana Swamy and his devotee called Sadhuvu.

A shed for tonsure ceremony, the Kesakhandanasalahas been built on the eastern side of the temple. A new kitchen is also present behind the main temple where the priests prepare Naivedyam for the lord. Another kitchen prepares Prasadam.

One of the most popular temples in Andhra Pradesh, a unique yantra based on Tripadvibhuti Narayan Upanishad exists here the shrine is constructed in two storeys, the lower one containing the yantra and upper one housing vigrahas of the lord. The idol is about 4 meter high is in cylindrical form.

The base in the lower sanctum represents Lord Vishnu and the middle portion represents Lord Shiva. The image of the deity forming a single idol and representing the Hindu trinity is of unique attraction.

Ekadashi is a very auspicious occasion for the annavaram temple as this is the best day to perform the Satya Narayan Vratham. Hindus have been performing the Shri Satyanarayana Vratham for ages throughout India.

The vratham is known to bring wealth, prosperity, education, and offspring. A number of pilgrims visit the temple from far and near and the daily average attendance of the temple is two thousand. Ekadashi is a very auspicious occasion for this vratham, but the individual devotees also perform this vratham on any convenient day. The vratham has become all the more popular due to the experience narrated in stories and also due to the legends and observations of daily life.

The vratham has an important fable according to which Sage Narada was once very much distressed about the immense misery of men in this world. He prayed to Lord Vishnu to suggest a way out. The Lord told him about the Satyanarayana Vratham and he said that this would relieve all men of the troubles.

The vratham was also useful to gain worldly prosperity and to achieve salvation after death. Lord narrated that a pious Brahmin from Banaras had performed this magical vratham first. Other people who had performed the Vratham and had benefitted were King Ulkamukha from Bhadrasila Nagaram, Emperor Tungadhwaja, and a Vaishya business man named Sadhuvu.

The community of Gollas in the kingdom of Tungadhwaja and a poor woodcutter from Banaras had performed this vratham. They were all blessed by the great Lord Satya Narayana Swamy (who is Vishnu himself) and they achieved all they desired in life.

This vratham has hence caught fascination of the millions of devotees who have heard the stories and offer respect to the Lord. These stories are easy to understand for the common people as well as within the understanding of the scholars. Thus, all classes of people can perform the vratham and this has popularized it among them as people have been benefitted by the vratham.

According to the texts of the Vratham, Sadhuvu’s daughter Kalavathi had left the prasadam of Lord Satya Narayan to see her husband and thus the husband drowned in the boat in which he was travelling. Thus, Kalavathi was grieved and decided to kill herself. Sadhuvu was extremely grieved to see his only daughter preparing for sahagamana. He thus realized that only Lord Satyanarayana could come to his relief and thus, he fervently prayed to him.

The lord revealed that this catastrophe was inflicted upon them as Kalavathi did not take her prasadam in the hurry to go to her husband. Thus, Kalavathi rushed home and took the prasadam and when she hurried back to the seashore, she saw her husband Ratnakara who was safe on the shore. She then told him all about the Lord and upon hearing this her husband was so much impressed that he heart fully prayed to the Lord and the Lord’s blessings changed the spot  into Ratnagiri hill on which the Lord took his permanent abode.

According to legend, the River Pampa running by the hill is the form of the devotee Kalavathi who had melted with ecstasy at the grace of the Lord and of her husband’s achievement and thus began to flow as Pampa River.

Poojas and Rituals at Annavaram Temple

The Sathya Narayan Vratham is performed on Ekadashi and has a specific procedure. First Lord Ganesha and the Navagrahas are offered respect and then the image of the deity is placed on a clean spot.

The Lord is appeased through chants, flowers, and prasadam that includes fruits, sweet wheat flour, and sweets are offered to the deity. The story is then narrated and Aarti is performed at the end. After the prayer, a small lamp is lit near the idol is known as the Aratika. The devotees take prasadam at the conclusion of the pooja.

How to Reach Annavaram Temple – By Rail, Road, and Air

Annavaram is a village situated close to River Pampa in the east Godavari district of Andhra Pradesh. It is situated about 32 kms from Pithapuram, 51 km from Kakinada and 72 kms from Rajahmundry. The Sri Veeravenkata Satyanarayana Swamy Vari Devasthanam, Annavaram is well connected by both rail and roadways. It can be reached by road, rail and airways:

By Train: Many trains that pass between Kolkata and Vijayawada stop at the Annavaram station. One can also stop at Visakhapatnam.

By Road: There are regular buses to Vishakhapatnam as well as Annavaram from all major cities. Madras to Calcutta, National Highway-5 road is going via Annavaram. Regular bus service is available from all nearby towns.

Sun Ray Village resort, Visakhapatnam which is the finest resort and family leisure destination at Vizag. Hotel Daspalla is centrally located in the heart of Visakhapatnam near Jagadamba centre.

Talupulamma Talli Temple: It is one of the most famous and a well-known place in Andhra Pradesh and people visit for offering pooja to the Goddess after purchasing a new vehicle.

Vishakhapatnam is near Annavaram and is also a popular tourist attraction in the region. It has been built along the seashore of the Bay of Bengal. It is bounded and broken by the bold headland which is called the dolphin’s nose (357mts above the sea level).

Vishakhapatnam also has a stunning beach. The region’s surrounding area also very picturesque with the well-forested Eastern Ghats and numerous rivers, major among which are the Godavari and Indravati River.