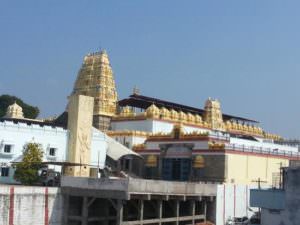 Bhadrachalam temple is the abode of Shri Sita Ramachandra Swamy. This temple is in honor of Lord Rama. The temple is on the banks of the Godavari river. It also relates to the life events of Saint Kancharla Gopanna, who was a great devotee of Lord Rama.

What is the history of Bhadrachalam Temple?

According to the history of Bhadrachalam Temple,  Gopanna the Tahasildar of Bhadrachalam (second half of 17th century), used money from government treasury to build this temple, and hence faced imprisonment in a dungeon at Golconda. Lord Rama miraculously gave the Sultan the money spent by Gopanna, after which he released him.

Gopanna then became Bhadrachala Ramadasa and went on to compose innumerable songs in praise of Rama.

Ramadasa heard the news that the villagers of palvoncha paragana were proceeding to witness Jatara at Bhadrachalam. He found the deities in an amazing appearance; and Ramadas then asked the villagers to contribute liberally for the construction of the temple.

So, the villagers appealed to him to spend the revenue collections for the construction of the temple with a promise to repay the amount after harvesting the crops.
The Golconda king Tanishah realized the devotional spirit of Ramadas after his imprisonment and took over the charge of temple administration.

Golconda king, Tanishah then realized Ramadas’s devotional spirit and dedication towards Rama, when Rama and Lakshmana repaid 6 lakhs Mohurs in the form of Ramoji and Lakshmoji, the servants of Bhakta Ramadas for the release of their devotee from imprisonment.

Thanisha gave voucher to these divine looking persons who approached him at his house during late night. Then they kept the voucher under the pillow of Gopanna where he was jailed.  Tanishah who woke up the next morning realized that those divine looking persons were none other than Rama and Lakshmana and made arrangements to get release of Gopanna and prayed to forgive him by placing all the Gold Mohurs received previous night at the feet of Gopanna.  But he refused to take back those mohurs except two as a mark of divine significance, and these two coins can still be seen in Bhadrachalam temple.

What is the significance of Bhadrachalam Temple?

Here is the significance of Bhadrachalam Temple:

What are the timings of Bhadrachalam Temple?

Here are the timings of Bhadrachalam Temple:

What are the festivals celebrated at Bhadrachalam Temple?

Some of the festivals celebrated at Bhadrachalam Temple are:

How to reach Bhadrachalam Temple?

Here’s how to reach Bhadrachalam Temple:

Some of the places where one can stay near Bhadrachalam Temple are:

Some of the places one can visit near Bhadrachalam Temple are: