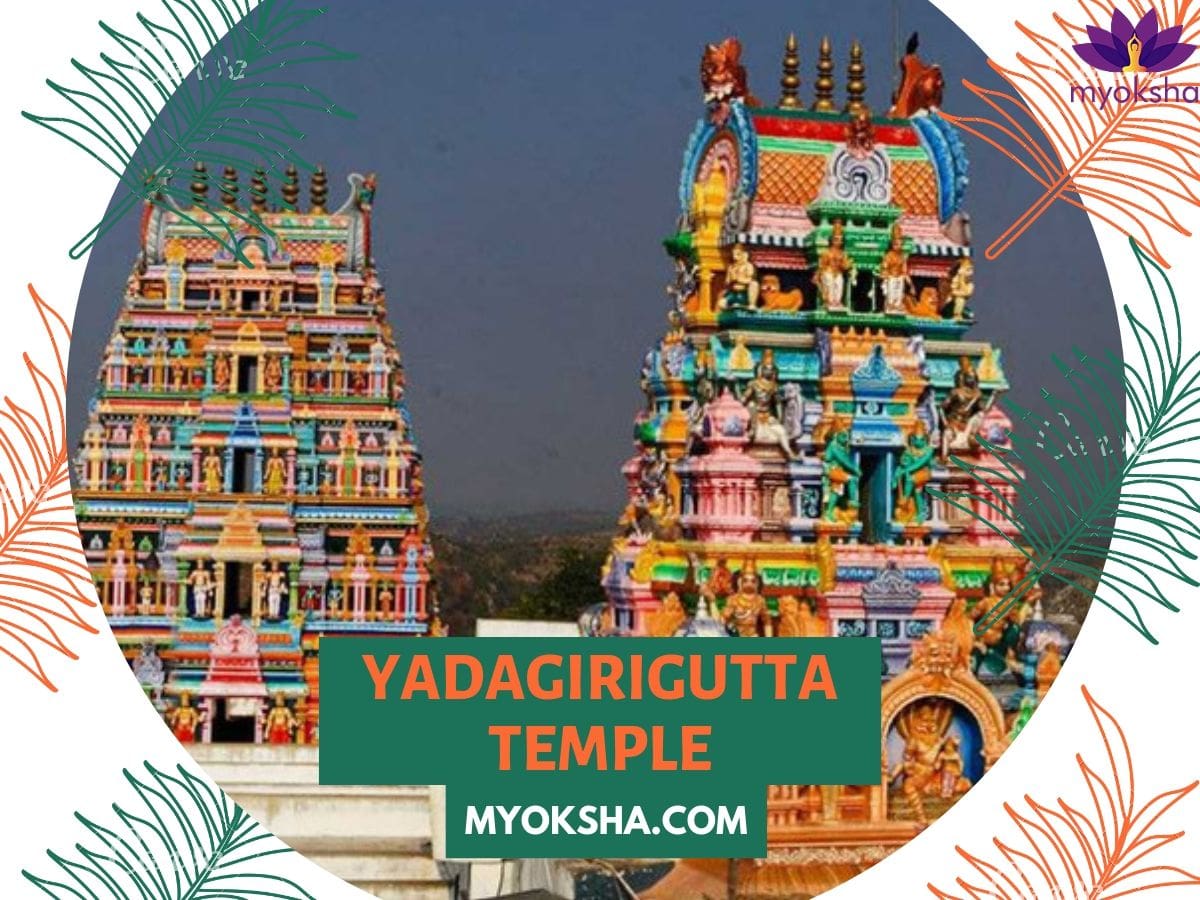 Yadagirigutta, also known as Lakshmi Narasimha Temple or Yadadri Temple, is a Hindu temple situated in Nalgonda district, Telangana, India. The temple is dedicated to Sri Narasimha, an incarnation of Lord Vishnu. The number of pilgrims visiting this temple is very high since it is situated near the capital city.

The temple opens at 4 AM and closes at 9:30 PM every day. However, there will be heavy crowds during Saturday, Sunday and other Public Holidays.

What are the Sevas and Poojas at Yadadri Temple?

The Aradhana and Pooja are performed in the temple according to Pancharatra Agama. Late Sri Vangeepuram Narasimhacharyulu who served as Sthanacharya of the temple sets the pooja procedure. The main Poojas are Saswata Puja, Saswata Kalyanam, Laksha Tulasi Puja, Abhisekam, etc.

What is the significance of Yadagirigutta Temple?

The Deavsthanam maintains Annadanam Scheme Since 1989. The donations received from the donors are being deposited and interest derived thereon is being spent towards Anna Prasadam Scheme. This scheme feeds 500 pilgrims daily on an average. However, the count increases to 1000 pilgrims daily on festival days like Bramhostavam and Karthika Purnima.

Donations can also be made for the construction of cottages & choultries for needy people. The Donation amount also comes under the category of Income Tax Exemption u/s 80G.

What are the miracles of Yadagirigutta Temple?

The miracle lies in a golden Sudarshana Chakra on the top of the Sanctum Sanctorum of this cave temple. The Chakra is the main weapon of Lord Vishnu and also the main symbol of the temple. The Chakra is also believed to posses mystic power and at times turns on its own. It is said that many years ago the chakra moved in a direction like a compass guiding the pilgrims towards the temple.

Also, as per the beliefs, Lord Narasimha has taken another 6th form of a doctor and is known as “Vaidya Narasimha” by his devotees. The Lord is known for curing many chronic diseases of its devotees.

What is the history of Yadagirigutta Temple?

According to the history, Maharishi Yada, son of the great sage Rishyasrunga and Santa Devi, performed penance here to Lord Vishnu. Being pleased with his devotion, Lord Narasimha (an incarnation of Lord Vishnu) appeared before him. He then manifested himself in five forms: Jwaalaa Narasimha, Gandabheranda Narasimha, Yogananda Narasimha, Ugra Narasimha, and Lakshmi Narasimha.

Maharishi Yada begged Sri Narasimha to stay on the hill in these forms. Lord Narasimha agreed to that and the hillock of Yadagirigutta became the abode of his all his five forms. All these five forms are presently worshipped inside the temple as Pancha Narasimha Kshetram.

What is the architecture of Yadagirigutta Temple?

The temple has followed the Thenkalai tradition of the Vaishnava Agama Shastras mostly observed in South India. The main architect of the temple was Anand Sai with lead architect P Madhusudhan. They were chosen for there understanding of ancient designs and Agama Shastras.

A new Yadadri temple is being built at the old temple site. The temple is also renamed as Yadadri by Chinna Jeeyar Swamy. He is also overseeing and guiding the construction of the new temple. The entire temple project is expected to be completed by the end of 2019.

The Chief Minister of Telangana, K. Chandrashekhar Rao approved the renovation of the temple with a budget of ₹1800 crores. The work started in 2016 and is being executed by Yadadri Temple Development Authority (YTDA). The temple also owned 39 kilos of gold and 1,753 tonnes of silver for lining of the gopurams and walls.

What is inside Yadagirigutta Temple?

Yadadgirigutta temple is present in a cave that is 12 feet high and 30 feet long. The sanctum sanctorum or Garbhagriha is located inside the cave beside a huge rock. The temple entrance arch also represents Mahabhuta (the five elements).

The temple also has Lord Narasimha in all the five forms embedded with stone in the main cave. Jwala Narasimha is in the shape of a serpent. Similarily, Yogananda Narasimha appears sitting for meditation in a Yoga posture.

How to reach Yadagirigutta Temple?

Yadadri Temple is situated 62 km from Hyderabad and is well connected by both rail and road. The temple has a moderate climate in all seasons.

What are the festivals celebrated at Yadadri Temple?

The Devasthanam operates a number of choultries, dormitories, and cottages as an accommodation to the devotees. The rooms and halls are also AC & Non- AC and available both uphill and downhill. The room rent ranges from Rs. 50 to Rs. 200 for one day.

There is also sufficient water supply and security measures to safeguard the temple premises.

If you have any questions related to Yadagirigutta Temple, please leave a comment below and we will reply in an hour.