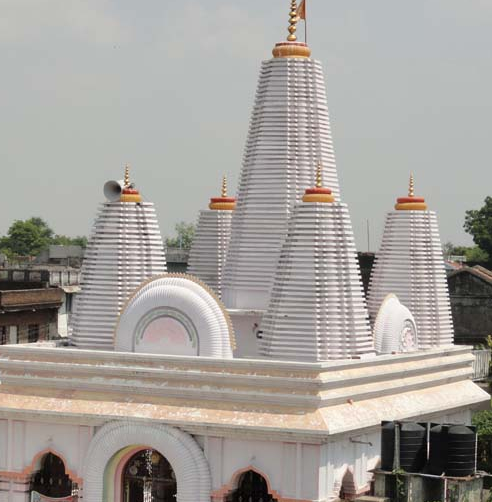 Yogmaya temple is also known as the Jogmaya temple which is dedicated to Goddess Yogmaya, sister of Lord Krishna. One of the oldest and the ancient Hindu temple situated in the small village of Mehrauli is the ancient Yogmaya Temple.

It is located in New Delhi near the Qutub Complex, this shrine is believed to be amongst one of the five surviving temples from the Mahabharata period in the city. Mehrauli was the first capital of post-Rajput era and all the rulers ruled from here.

This is one of the five temples dedicated to Yogmaya, other 4 being in Barmer, Jodhpur, Vrindavan and Multan. The deity is worshipped as the mother of all beings and is considered one of the personal powers of the divine.

Lord Krishna (who was born at midnight on Ashtami, in the Mathura King Kansa’s prison), as the eighth son of Vasudeva and Devaki, was replaced by a baby girl. Who was born at the same time to Nand and Yashoda in the village of Gokul across the Yamuna.

As Vasudeva has exchanged the babies at the very night they were born; in the morning, the guards told Kansa that a baby has born in the night. Vasudeva exchanged the babies, he reached Krishna to Yashoda and brought Yogmaya from there to Devaki,in the jail. On hearing of the birth of the child, Kansa arrived at the prison to kill the infant.

But the girl child slipped out of the hands of Kansa, as he was about to bang her head against the prison wall, and went up in the sky. There was an Akashvani (celestial broadcast), which said, ‘O foolish Kansa! Your slayer has been born and is safe in Gokul.’

The baby girl was goddess Yogmaya (divine illusion), according to Shvetashvatar Upnishad. God has many divine powers, such as knowledge, almightiness, action and his most important personal power called Yogmaya or ahladini shakti. The Gods derive power from their female companion. As Shiva is nothing without Shakti, so was Krishna without Yogmaya.

Significance of the Yogmaya Temple

The temple remains open from morning 06.00 AM till 08.00 PM in the night. It remains open for all days of the week and the entry to the temple and puja that is performed is free.

Festivals celebrated at the Yogmaya Temple

Phoolwalon-ki-sair Festival : It is a festival of flowers which is celebrated in surrounding areas of Mehrauli like Qutub Sahib’s dargah and Yogmaya temple. The other activities that happen during the festival are kite flying, wrestling matches, qawalis and much more. The reigning Mughal emperor Akbar Shah II wanted to nominate his younger son Mirza Jahangir as his heir, for he wasn’t happy with his eldest son Siraj Uddin Zafar. This decision was opposed by the then British Resident, Sir Archibald Seton. Mirza Jahangir insulted Seton publicly and fired at him. The Resident instantly issued orders for Mirza to be exiled to Allahabad. The distressed Queen vowed to offer a chadar of flowers at the dargah of Khwaja Bakhtiar ‘Kaki’ at Mehrauli if her son was released. Two years later, when Mirza Jahangir was released, the Begum went to Mehrauli to fulfil her vow, accompanied by the imperial court and the entire population of Delhi. A 7-day mela ensued, with swings hung in the mango groves, cock and bull fights, wrestling, kite-flying and swimming contests. The secular-minded Mughal emperor also ordered for a floral pankha to be offered at the nearby Yogmaya Temple. The festivities are followed by cultural programmes with enthralling Kathak performances, Qawwalis, and devotional songs which are celebrated by both Hindus as well as Muslims.

Mahashivratri – It is the festival that is celebrated on February/March. Maha Shivratri is a Hindu festival which is celebrated by people following Hinduism in India. People often fast on the night of Shivratri and sing hymns and praises in the name of Lord Shiva. Hindu temples across the country are decorated with lights and colorful decorations and people can be seen offering night long prayers to Shiva Lingam.

Navaratri Festival – This festival is observed twice a year, once in the beginning of summer and again at the onset of winter. Navaratri is divided into sets of three days to adore different aspects of the supreme goddess. During Navaratri, devotees invoke the energy aspect of God in the form of the universal mother, commonly referred to as Durga. Different devotees all over the country gather at the temple to celebrate it and there are different major events conducted.

Poojas and Rituals at Yogmaya temple

The major ritual consists of offering and bathing the idol (Mata Snanam) with milk followed by an Aarti every morning and evening. This, in turn, is followed by hymn recitation. Offerings can be purchased just before the entrance of the temple. Visitors should be alert in the area as the place is very crowded.

Mahashashthi – The sixth day of Navaratri is celebrated as Durga Sasthi or Maha Sasthi. On Sasthi Katyani Puja is observed as part of NavaDurga Puja in Shaktheya Samprdaya.Unveiling the face of the idol of Goddess is the main ritual on this day.

Mahaastami – Mahashtami, also known as Maha Durgashtami, is the second day of Durga Puja. Maha Ashtami is one of the most important days of Durga Puja. Devotees sing different hymns in sanskrit language and offering worship to the goddess.

Mahanavami – Maha Navami is observed on the ninth day of the Shukla Paksha (waxing phase of moon) of Ashwin month. It is the ninth and the final day of nine-day Navratri Festival. Mahanavami is also the penultimate day of Durga Puja. The Navami Bhog is offered to the goddess and offered as Prasad to the devotees.

By Metro: The nearest metro station is Saket, Chattarpur and Malviya nagar.

By Air: Indira Gandhi International airport is the nearest airport to Yogmaya Railway station, New Delhi which is 24 Km away from Yogmaya Temple.

By Road: Roads are well maintained in Delhi, so one can easily ride through cabs or can travel through there own vehicle. The state belongs to Delhi Transport Corporation buses connect all the junctions in Delhi. Numerous super deluxe A/C motor coaches run from New Delhi . State government operates bus services from Delhi to all the neighboring cities. Bus transportation service within the city is also affordable.

Hotels in Yogmaya: Where to stay

There are many hotels available to stay near the Yogmaya temple. Some of them are:

It is also known as Shree Adya Katyayani Shaktipeeth Mandir is dedicated to Katyayani Mata, the 6th Form of Nav Durga. Within the walls of the Chattarpur Temple complex, one can visit 20 different types of temple devoted to Indian gods and goddesses in various forms such as Goddess Laxmi, Lord Krishna, Lord Shiva and Lord Ganesha. The main attraction of Chhatarpur Temple is the golden image of Maa Katyayani and two rooms dedicated to Maa Katyayani.

Shri Digambar Jain Lal Mandir is oldest jain temple in old Delhi.It is situated right opposite the Red Fort, at the entrance of the main road. Mughal Emperor Shah Jahan (1628-1658) once invited several Jain seth to come and settle in the city and granted them some land south of the Chandani Chauk around Dariba Gali. He also permitted them to build a temporary structure to house a Jain temple. The main idol is that of Tirthankara Parshva.This temple has undergone many alterations and additions in the past and was enlarged in the early 19th century.