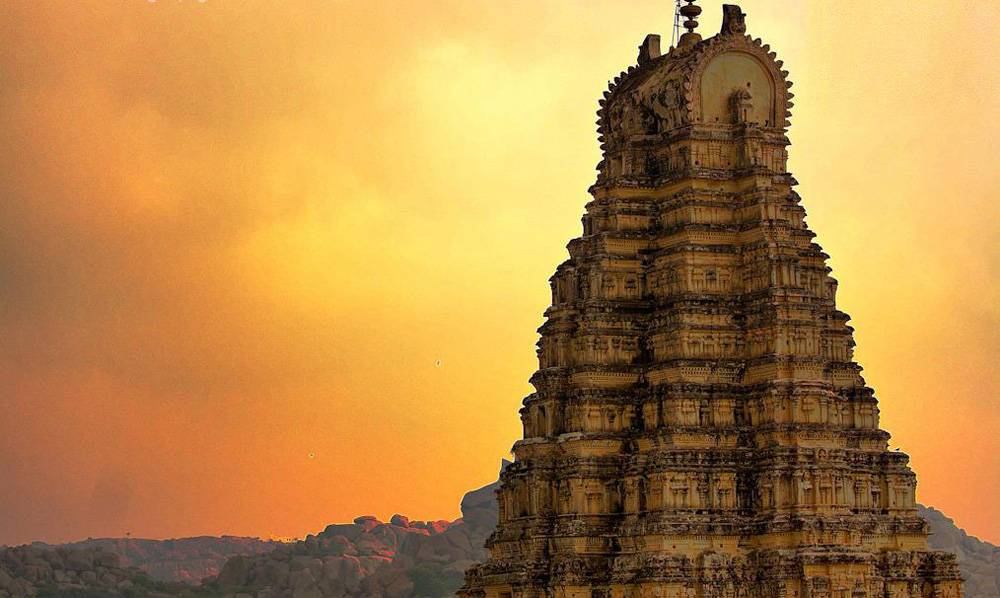 Virupaksha Temple is located in the historic village of Hampi. The village of Hampi (historically called Hampi) lies within the limits of the ruins of the Vijayanagara city. The word Hampi is derived from the name Pampa (Lord Brahma’s daughter and the old name of River Tungabhadra), and one of the regions around Hampi is still known as Pampa kshetra. As one makes a foray into the ruins of Hampi, now a UNESCO World Heritage Site, one cannot escape the popularity and prosperity of the bygone era that existed in the empire of the Vijayanagara dynasty.

The holy Virupaksha Temple stands in the center as the symbol of this greatness and grandeur of the empire that flourished during the 14th – 16th century. The architectural wonder is a testament to the times of a great, well developed and well-administered city.  The history of the Virupaksha Temple is inseparable from the story of the great city. The name Virupaksha means “with oblique eyes”. Some also believe that the word means “misformed eyes” referring to the third eye of Lord Shiva. It can also be inferred that “Virupa” meaning “Distorted” and “Aksha” meaning “Eyes” refer to the occurrence of three eyes for Lord Shiva and consider that itself as a distortion.

Virupaksha Temple is also known as the Pampapathi Temple. The presiding deities of Virupaksha Temple are Lord Virupaksha, a form of Lord Shiva and Goddess Pampa, his consort. This is only fully functioning Temple among several ruins of other Temples in the Hampi area.

Vijayanagara architecture is a mixture of Chalukya, Pandya, Hoysala and Chola styles. Virupaksha Temple Complex consists of the Sanctum, three Ante-Chambers, two pillared halls, a pillared quadrangle walkway known as the Cloister, three Gopurams, courtyards and several smaller shrines. Besides the main shrine dedicated to Lord Virupaksha, other shrines are dedicated to Goddess Bhuvaneswari and saint Vidyaranya is located within the Temple Complex.

The pillared Mandapam was built under Krishna Deva Raya in 1510 AD as per scriptures on the walls. This Mandapam contains paintings and murals of several avatars of Lord Shiva and Lord Vishnu. The murals on the ceilings also depict scenes from the Mahabharata and Ramayana. Among the three Gopurams of the Temple, the Eastern Gopuram is the main entrance to the Temple. The Gopuram is nine-storied and has a cuboidal structure. The Northern Gopuram is five stories high and the inner-eastern Gopuram is three stories high.

The main sanctum houses the deity, Lord Virupaksha in the form of a Linga. The smaller shrines dedicated to Goddess Pampa and Goddess Bhuvaneswari, consorts of Lord Shiva are situated to the north of the Sanctum and are much older than most of the Temple.

The “Ruins of Hampi” or the “Hampi Complex” consists of several civil and religious buildings. The important Temples inside the complex that one must visit to experience the spirituality of the great kingdom are Vittala Temple, Ramachandra Temple, Underground Shiva Temple, Kodandarama Temple, Krishna Temple, and the Chandramouleeshwara Temple.

History and Legends of  Virupaksha Temple

Significance of the Virupaksha Temple

The ruins of Hampi lie on barren open land and it gets extremely hot during the summers. Hence, it is recommended to wear light, airy cotton clothes for the visit. The Temple does not follow any strict dress code. However, it is recommended that decent and clean clothes should be worn to visit the holy site.

Poojas and Rituals at Virupaksha Temple

How to reach Hampi

There are no hotels situated in the immediate vicinity of the Temple. However, several hotels, lodges, and resorts have opened up in the surroundings of Hampi ruins. Some of the popular ones are Sri Lakshmi Golden Beach Resorts, Royal Orchid Central, Hampi’s Boulders Resorts and Hotel Malligi.

The town of Hampi is becoming a major tourist attraction lately. Hence, a lot of restaurants have been set up surrounding the world-famous ruins. The cuisine offered by these restaurants varies from simple south Indian to exotic cuisines like Italian and Portuguese. Some of the most popular restaurants are Mango Tree, Laughing Buddha, New Shanthi, Ravi’s Rose and Sagar Hotel.