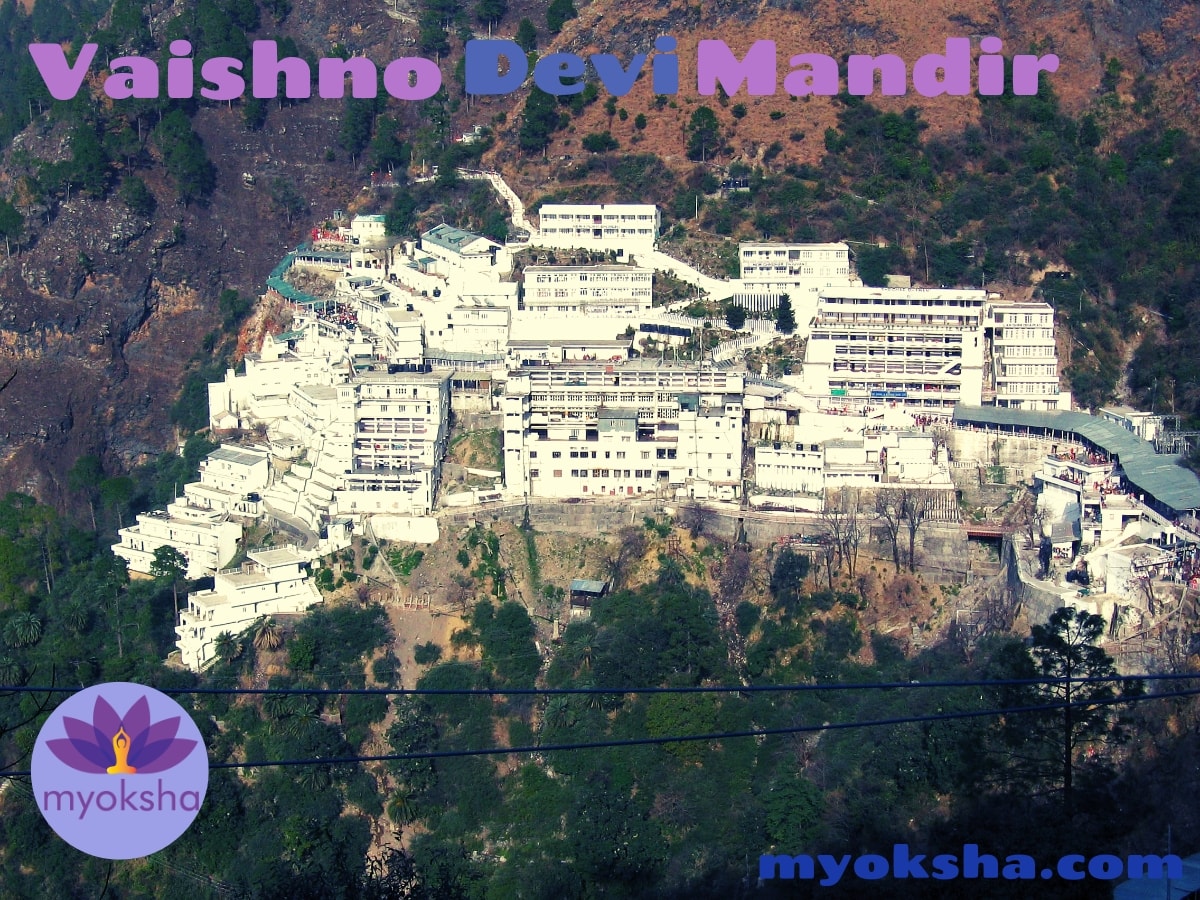 Vaishno Devi Temple is a pre-eminent dedication to Goddess Shakti (Sati or Adi Parashakti). The shrine sits comfortably among the Trikuta Mountains in Jammu and Kashmir.

Tribes of pilgrims flock to the beloved shrine battling harsh weather and a steep climb with zeal and admiration to shower themselves with her blessings.

This cave-structured temple is a place of worshipping the Goddess in the form of a five feet rock with a three-headed peak. Furthermore, the three heads locally go by the name Pindies, which are a reflection of the three holy forms of Goddess Shakti. The Pindi on the right peak represents Goddess Mahakali, the central Pindi represents Goddess Mahalakshmi and the Pindi to the left is an avatar of Goddess Saraswati.

What are the timings of Vaishno Devi Temple?

“Atma Pooja” meaning self-cleansing by the priests marks the start of the Pooja. The Goddess is then bathed with water, ghee, milk, honey and sugar. Amidst several chants and shlokas, the Goddess dresses up in a saree, chola and chuni.

The Morning and the Evening Aarti – The Aarti dedicated to the Goddess happens twice a day. Similar rituals take place once just before sunrise and once immediately after the sunset.

The whole process lasts up to two hours. Each Aarti is done once inside the main shrine or the sanctum and then outside the cave where devotees gather to witness the divine procedure.

Hereafter she is adorned with several ornaments like bangles and sindoor (kumkum). The offering of the Naivedyam is then made to the Goddess. Hereafter, the Aarti makes its way outside the cave where all the other Gods and Goddesses are worshipped.

Vaishno Devi Temple stands at one of the three peaks of the Trikuta Mountains. The 13 km Trek to the peak of the mountain starts in Katra, passes through Banganga and then diverges into two different pathways.

One route goes via the Adhkuwari Temple and is the old one to reach the Bhawan. Moreover, this route is steep and narrow but beliefs are that it is built along the original route that the Goddess took to reach the Holy Cave at the top.

However, Considering the convenience of the devotees, the administration of the temple constructed a new route. The new route is via Himkoti. This track is wide enough with an ascendable gradient. Also, most pilgrims accompanied by senior citizens and young ones prefer this route.

Banganga makes the first stop for the pilgrims on their way to the Bhawan. However, the next stops are Charan Paduka and Adhkuwari. The Adhkuwari shrine is a mark that denotes that the pilgrims are halfway through the Bhawan.

Management of Vaishno Devi Temple is quite well. And fulfils all necessary and modern requirements of its visiting pilgrims such as food, shelter, resting places, viewing points, blankets, toilets, hot water facilities and medical facilities.

The exact date or the year of the beginning of the worship of the Goddess in the caves cannot be traced. However, several references are there in Mahabharata which hint towards the holy goddess of Jamboo Mountains.

Jamboo is the ancient name of the present-day Jammu. Beliefs are that Pandavas were the original worshipers of the Goddess in the holy cave. Five stone figures probably representing the Pandavas found in a nearby mountain range giving some credibility to the association of Pandavas to Vaishno Devi Temple.

There are many legends about the temple such as –

Legend of Vaishno Devi as Trikuta

According to the legend, in the Treta Yuga, Mata Vaishno Devi was born as Trikuta to Ratnakar Sagar in South India. She later became popular as Vaishnavi as she was born from the lineage of Lord Vishnu.

At the age of 9 years, she performed penance on the seashore and met Lord Rama. She threw a marriage proposal before him. But he gave her a promise that Lord Vishnu’s tenth avatar in the Kaliyuga, Kalki will marry her.

Lord Rama gave her instructions to meditate in a cave present in the Trikuta Mountains of Jammu. He instructed her to set up an Ashram at the base of the mountains. He also gave her a bow and an arrow, a lion and a small army of monkeys for her protection.

Legend of Mata Vaishnavi and Bhairavnath

Goddess Vaishno surprised Bhairavnath with her powers. And then he wanted to test her powers. For this, he took Shiv Avatar Guru GorakshNathJi’s permission. However, Guru Gorakshnath did not recommend it but he let Bhairavnath go ahead with his plans.

Guru Gorakshnath and all his disciples enjoyed pure vaishnav food and went off. But Bhairavnath stayed back to test her powers. Then he attempted to grab Mata Vaishnodevi and she tried her best to daunt him. On failing to do so, Mata Vaishno decided to flee away into the mountains to continue her Tapasaya undisturbed. But BhairavNath chased her to her destination.

Vaishno Devi halted at Charan Paduka, Banganga, and Adhkuwari, but she observed much to her distaste that Bhairav Nath followed her everywhere. Finally, she lost her patience and beheaded him outside the holy cave. The head of Bhairon Nath fell 1.5 km away and the site became popular as Bhairon Nath Temple today.

His soul repented the incident and asked for forgiveness from the Goddess. The Goddess forgave him and granted him the boon that the devotees will have to pay a visit to Bhairav Nath’s shrine to complete her pilgrimage.

Beliefs say that the Goddess then shed her human form and took the form of a rock to continue uninterrupted meditation.

The cave was unknown until about 700 years ago. In a village named Hansali, near the Trikuta Mountains, lived a Brahmin Pandit named Shridhar. He was a loyal devotee of Goddess Shakti. Goddess Shakti was happy with his devotion and gave him darshan in the form of a Kanya (young girl).

Then on her request, Shridhar invited all the villagers to his humble abode for a Bhandara (a feast of food). But seeing the crowd for the Bhandara increase Shridhar was afraid if he could accommodate them all inside his hut. Also, he worried about the food availability for all his guests.

Miraculously, the girl that gave him darshan appeared and created abundant food and space so as to fulfil everyone’s hunger.

After the Bhandara, Shridhar wanted to thank the girl but she disappeared. Hence, he spent several sleepless nights. Eventually, the Goddess gave him darshan in his dreams directing him to proceed towards the cave that was her abode.

He followed the directions that he got in his dreams and eventually discovered the cave. According to the beliefs all the three Goddesses, Mahakali, Mahalakshmi and Saraswati gave him darshan there.

Other Legends related to Vaishno Devi

How to reach Katra?

Obtaining “Yatra Parchi” or a “Travel Slip” at the Yatra Registration Counter near the Katra Bus Stand is a must for on-foot travellers. One can also do the booking of the slip on the temple website.

Other famous temples in Jammu and Kashmir are:

If you have any questions about The Vaishno Devi Temple, please leave a comment below, and we will get back to you within one hour.