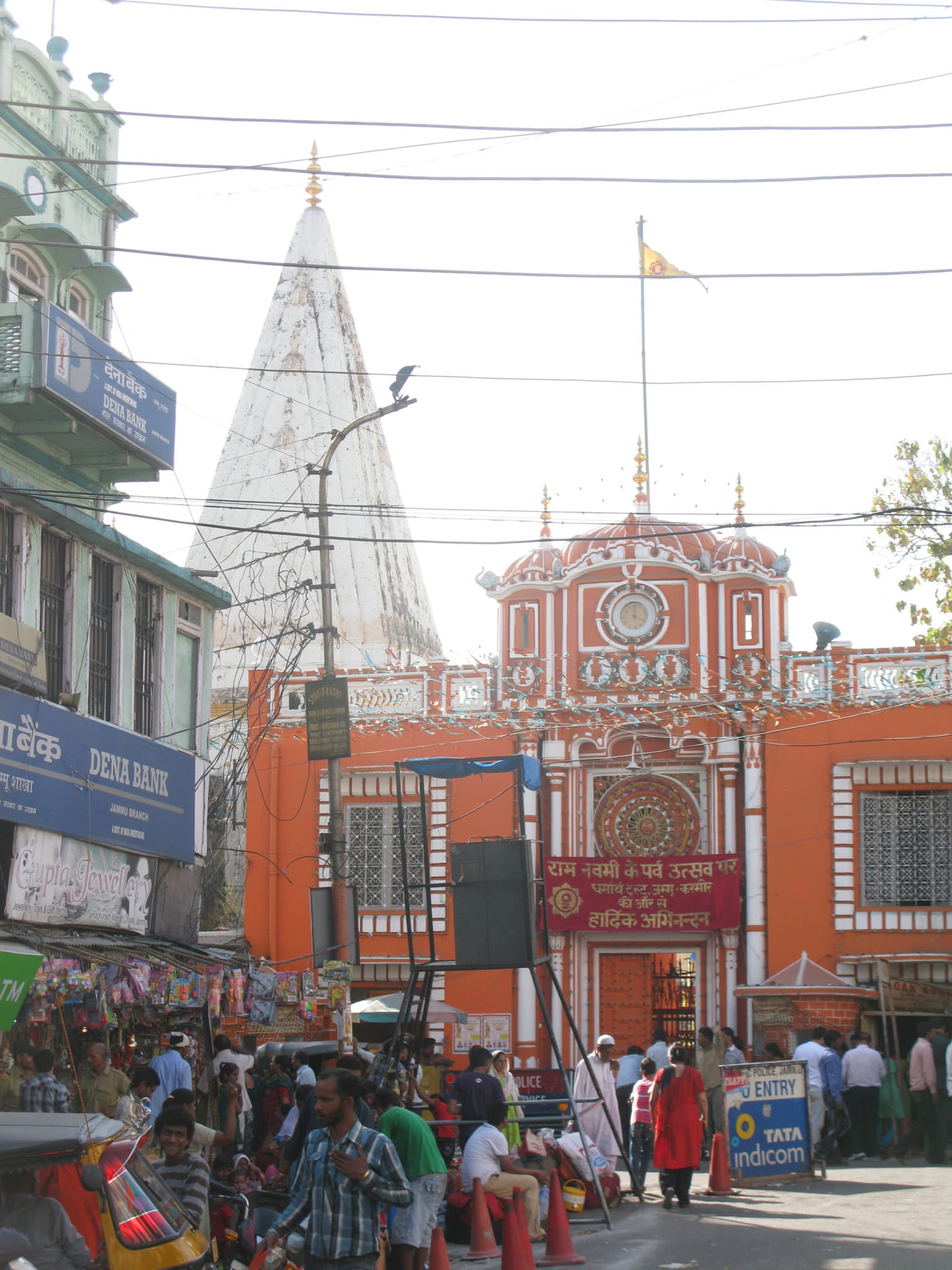 Raghunath Temple is located in Jammu and is dedicated to Lord Rama. Apart from him a many other Gods are worshipped here. The temple premises are also home to Gods like Lord Shiva. It is correspondingly a popular site for the Amarnath pilgrims. The temple overlooks the beautiful city of Jammu and is surrounded by lush green trees and mesmerizing green valley.

The city of Jammu is home to some of the most splendid sites and temples and one of the best examples of marvelous architecture in the city is the Raghunath temple. The temple is one among the best temple complexes in Northern India and it has grand complex and extremely beautiful and splendid temple architecture in the country. The temple compound is a grand one and it consists of a total of 17 temples. The temple is huge in terms of both size and scale and it has the images of all Hindu deities that exist that are represented in a grand way inside the temple.

Raghunath Temple has been dedicated to Lord Rama who is one of the primary Hindu deities. The temple was constructed by Maharaja Gulab Singh who was the founder of kingdom of Jammu & Kashmir and the work on the temple began in 1835 A.D. After his death the work was completed by Maharaja Gulab Singh’s son, Maharaja Ranbir Singh. The construction of the temple was finished in the period of 1853-1860 A.D. The main temple’s inner wall is covered with gold sheet on the three sides of the temple. The temple also has a vast gallery which has various “lingams” as well as “saligrams” that are placed for the general public as well.

The Raghunath temple has a historical significance and there are multiple temples that surround the main temple and these temples are dedicated to the multiple Gods and Goddesses that are connected with the times of the epic Ramayana. This popular temple in Jammu is renowned for the temple’s depiction of Rama Leela and also of the Krishna Leela in its beautiful paintings. Prevalent legend suggests that the temple is dedicated to Lord Rama and was originally built by Raja Jagat Singh of Kullu in order to correct a major wrong that was done by him. The main idol that is placed inside the temple was brought back from Ayodhya which is the birthplace of Lord Rama according to the Ramayana.

The temple also has peeps of the Mughal masonry that can be visualized in architectural splendor of the Raghunath Temple. The temple carvings and arches are extraordinarily resplendent that grabs everyone’s attention. The temple complex also has a library that houses rare Sanskrit books as well as manuscripts. People also visit this temple in huge numbers in order to pay their homage to their deity and to seek blessings from the Lord.

The temple has a special significance in the region of Jammu as the religious life style of the Kullu valley basically revolves around the sacred idol of Lord Raghunath whom the temple is dedicated to. The daily rituals of the temple mainly comprise a sacred bath, elaborate floral decorations of the presiding deity and the daily worship of the principal deity of the Kullu valley.

Significance of the Raghunath Temple

The major significance of the Raghunath Temple is seen with seven shrines each of which has its own “Shikhara”, (which deciphers to ‘mountain peak’ in Sanskrit and this refers to rising towers and is a special part of the Hindu temple architecture especially in northern India). This temple has one of the largest temple complexes in the entire of North India which is located in Jammu city. This temple has multiple Gods enshrined in it but has the presiding deity as Lord Ram who is believed to be an “avatar” or an embodiment of Lord Vishnu.

The entrance of the temple has a life size image of Maharaja Ranbir Singh who was its founder and also an image of Lord Hanuman that exaggerates this holy site. The central shrine of the temple is dedicated to Lord Ram also popularly known as Raghunath after whom the temple has been named. Lord Rama is the commanding deity of this temple.

Raghunath Temple is open all hours except from evening 8PM to morning 4AM. The temple is easily reachable and there are no restrictions as such except the genera security checking outside the temple.

Festivals Celebrated At the Raghunath Temple

The temple is popular among most Hindu pilgrims as it has a number of shrines dedicated to almost all Hindu Gods. Apart from the central shrine many other shrines of the temple encompass the various incarnations of Lord Vishnu. The other remarkable shrine is of Lord Surya or the Sun God, which houses the multiple forms of the Lord. In the inside of the temple there are some other shrines and most of these are home to the oversize statues of Hindu Gods as well as Goddesses. The temple also has another specialty which is that it comprises almost all images of the Hindu Pantheon which is one of the unusual embodiments in temple architecture.

The major event when this shrine is set up well is during the Amarnath Yatra which is a major festival here. The pilgrims take part in the long Yatra and also visit the temple to seek blessings.

Pooja and Rituals of Raghunath Temple

The temple has the usual sermons and the rituals that are common in the Hindu Temples and it also witnesses the morning and evening aarti.

How To By Reach by Rail, Road and Air

Air Travel: Many major Airlines operate from the Jammu Airport that fly to various important destinations including Delhi, Mumbai, Srinagar. The city also has helicopter service that is available for the Vaishno Devi tourists from Katra; which is the base camp of Mata Vaishno Deviji to the Mata Vaishno Deviji Bhawan.

Rail Travel: One of the main rail lines is the Jammu Tawi which is an important railhead of the Northern India. The city of Jammu is well connected to almost every major town in India and it has very frequent trains to all the major cities like Delhi, Mumbai, Kolkata, Chennai etc. When the rush increases during the holiday season, additional trains also operated to and from various parts of the country.

Road Travel: Jammu being on the National Highway 1-A is exceptionally well-connected by the highway network to all parts of the country. There are daily bus services of all classes that operate to and fro to the city of Jammu to Delhi, Amritsar, Chandigarh, Jalandhar, Shimla, Manali etc. Many tourist taxies also operate between Jammu – Srinagar and Jammu – Katra.

Jammu being a major Indian city has many 3-star, 4-star, and 5-star hotels along with 7-star hotels and resorts. The city also has many honeymoon resorts. The major hotels are Hotel Jammu Ashok, KC Residency, and Hotel Asia. The city is fast seeing a lot of development and many more hotel chains are planning to set up in the city in the near future.

Jammu is a popular tourist spot situated on hillock and is on the bank of river Tawi. The city is bound by the Udhampur district in north and in the northeast. The Kathua district lies in the east and southeast, Pakistan (Sialkot) is in west and the Rajauri district in addition to the POK (Bhimber) are in the northwest. The city is popularly known as City of Temples as it has innumerable temples as well as also many shrines that have glittering “Shikhars” that soar into the sky. The Shikhars dot the skyline of the city and they create the ambience of holy and peaceful city.

Following are some major temple in Jammu:

Other significant temples in the Jammu region are the Lakshmi Narayan temple, Duda Dhari temple, and Panj Mandir. The city is also known for its many other tourist sites like museum and bridges.