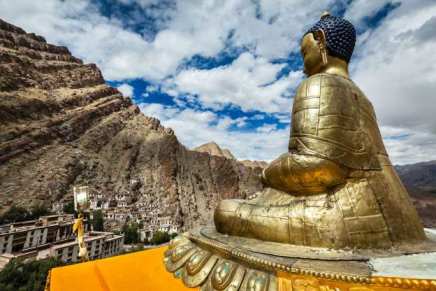 Hemis Monastery is a Himalayan Buddhist monastery of the Drukpa Lineage. The monastery was re-established by the Ladakhi King Sengge Namgya, in 1672. The monastery is situated 45 km from Leh City, Hemis. It is present on a mountain on the west bank of the River Indus.

Hemis monastery attracts numerous tourists each year because of its beautiful architecture. It is the biggest and most important Monastery in Leh, Ladakh. This is one of the wealthiest gompas in India. It is famous for its rich collection of ancient remnants like the copper statue of Buddha, gold and silver stupas, sacred Thangkas, murals, and various artifacts.

What is the history of Hemis Monastery?

What is the Hemis festival?

The Hemis Festival is dedicated to Lord Padmasambhava.  It is believed that he was born on the 10th day of the fifth month of the Monkey year as predicted by the Buddha Shakyamuni. It is also believed that his life mission is to improve the spiritual condition of all living beings. This day comes once in 12 years. It is believed that these sacred rituals give spiritual strength and good health. This festival attracts hundreds of tourists from around the world.

How to reach Hemis Monastery?

What is the best time to visit Hemis Monastery?