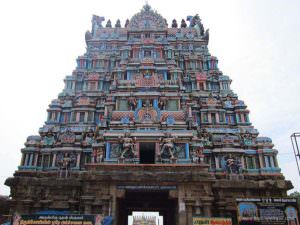 Thiruvenkadu (Adhi Chidambaram) is in Nagapattinam district of Tamil Nadu. It is one of the nine Navagraha temples in South India. The presiding deity here is Lord Shiva, famous  as Venkaatunadar and Sri Swetaranyeswarar. His consort(Ambal) is Bhrama Vidya Nayaki. Nataraja’s dance here also popular as Hasti Natanam.

What is the history of Thiruvenkadu?

There is a legend that associates with the history of Thiruvenkadu. A demon Maruthuvan, received boons from Brahma and then tortured devas. The Devas went to Shiva for freedom from the demon. The Lord advised the Devas to go to Thiruvengadu and live there in disguise.

Shiva also sent his vehicle Nandhi and defeated the demon. The demon injured Nandhi with his trident.

Lord Shiva converted his anger into the Agoramurthy form. On seeing the Lord, the demon surrendered at his feet and begged his pardon. He also prayed that those worshiping Agoramurthy would not have enemies at all.

Achuthagapanar bathed in the three tanks, worshiped Thiruvengadar and hence, the lord blessed him with a child. This child came to be known as Meikandar and became the chief of Santhana Kuravars.

Vedarasi, a brahmin had placed his bundle of food in the hollow of a tree. A snake residing in the hollow spewed poison on the food.

Unaware of this, Vedarasi gave this food to a vedic priest, who died of the poison. This brahmin was absolved of his Brahmahathi Dhosham by worshipping Lord Siva of Thiruvengadu.

When Thirugnanasambandar reached the borders of Thiruvengadu, the whole place looked like Sivaloka and the sands Sivalingas.He hesitated to place his legs on this holy land and cried Oh! Mother. On hearing his voice, Goddess Periyanayaki appeared there and took the child on her laps. Moreover, the idol of Periyanayaki with Thirugnanasambandar is majestically present in the temple.

Thiruvengadar, the son of Sivanesan and Gnanambigai, with the blessings of a Siva Muni received Siva Ditchai and a Siva Linga and hence became famous as Pattinathu Adigal.Indra having killed Virudhasuran, worshiped Lord Thiruvengadar and was absolved of his sins.

Also, Sage Durvasar gifted a mala to Indra. However, Indra in his vanity threw it on his white elephant Iravadam which stamped the mala under its feet. Durvasar cursed Indra. Afterwards, Indra realizing his folly formed a tank -Thadagam in Thiruvengadu and worshipped a Siva Linga. Lord Siva blessed him and he reached Indraloka again.

Suwedakedu on realizing that he was to die in his eighth year reached Thiruvengadu and performed Siva pooja. As soon as he saw Yama, he held on to the Siva Linga tightly. Yama on seeing Thiruvengadar, ran away in fear.

What is the significance of the Thiruvenkadu Temple?

Here’s the significance of Thiruvenkadu Temple:

What are the timings of Thiruvenkadu Temple Temple?

Here are the timings of Thiruvenkadu Temple:

What are the festivals celebrated at the Thiruvenkadu Temple?

Some of the festivals celebrated at the Thiruvenkadu Temple are:

How to reach Thiruvenkadu Temple?

Here’s how to reach Thiruvenkadu Temple:

Where to stay near Thiruvenkadu Temple?

Some of the places where one can stay near Thiruvenkadu Temple are:

Where to eat near Thiruvenkadu Temple?

Some of the places where one can eat near Thiruvenkadu Temple are:

What are some temples near Thiruvenkadu Temple?

Some of the temples near Thiruvenkadu Temple are:

Sri Suvedharanyeswarar Swami Temple: Swetharanyeswarar Temple is a Hindu temple located in the town of Thiruvengadu near Sirkazhi. The main deity is Shiva – Swetharanyeswarar (lord of white forest) while the goddess is Brahma Vidya ambal. There is a separate Sannidhi for Bhudhan (mercury).

Sri Mullaivananathar temple: This is an ancient Siva temple about 20 kms East of Thanjavur dedicated to Sri Mullaivananathar as well as Sri Karparakshambigai. Moreover, it is a huge temple that spreads over a wide expanse with imposing Gopurams and a tank in front of it. Devotees also believe that childless people who worship here with devotion and faith get the blessing of pregnancy and pregnant women of safe deliveries. Unmarried women also pray here for their marriages.