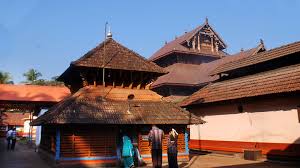 Tali Shiva Temple is the oldest temple in Kozhikode, Kerala. The temple is in the middle of Kozhikode town and was built during the 14th century. The temple worships Lord Shiva. The deity here is a blended form of Goddess Uma and Lord Shiva. It is known as Uma Maheshwara.

Like any traditional Hindu temple, the Tali Temple opens during the early morning. It opens at 4.30 am and is open till 11.00 am. The temple again opens at 5.00 pm and closes at 8.30 pm. Furthermore, there are five different religious programs that take place every day at this temple.

Appam is a tasty snack available at the temple after worship. This is popular as Prasadam.

Devotees need to come in traditional wear. People with jeans and western dress cannot enter the temple. You can hire a traditional dress (Mundu) from the temple counter. Also, men cannot come within the temple with shirts. They can drape a Veshti instead of a shirt.

Locals call festivals as Utsavam at the Tali Temple.

As the temple is at the centre of the town, it is easily accessible from all parts of Kerala. Kozhikode is 184 kms from Kochi, 191 kms from Coimbatore, 232 kms from Mangalore, 359 kms from Bangalore and 378 kms from Trivandrum.

By Air: Kozhikode is just 23 km from the Calicut International Airport. This airport is connected to the various Indian metropolitan cities and gulf countries. There are private cabs available from the airport area which can take you directly to the temple.

By Rail: Kozhikode has own railway station. Therefore, there are regular trains from Delhi, Mumbai, Hyderabad, Chennai and Bangalore to the place. Mngla Lksdp Exp, Kerala S Kranti, Ypr Cannanore Exp, Mangalore Exp Ypr Cannanore Exp are some of the express trains travelling on a daily basis to Kozhikode.

By Road: There are several tourist buses that travel from Karnataka and Kerala to the Tali Temple. Besides these private air conditioned buses, you can also avail buses from KSRTC. The buses connect important cities like Chennai, Bangalore, Mangalore and Trivandrum to Kozhikode. Both luxury and semi-deluxe buses are available. If you are travelling via road on your own private car or bike, you can opt for the routes like Lakkidito, Nilamburto, Thalasseryto, Pattambito, Tholpettyto, Bandipur National Park to Kozhikode.

The Tali Temple has great importance in the religious life of the people in and around Kerala. Hence there are several hotels near the shrine for people from all classes. The Gateway Hotel Beach Road, Khaleej Residency, Chamundeshwari Tourist Home and Malabar Palace are some of the hotels just at 0.4 kms from the Tali Temple.

Kozhikode is a pilgrimage and has many temples around.

The best part of travelling to the Tali Shiva Temple in Kozhikode is that you can visit the place any time of the year. The natural beauty of the place changes with every season. Visit the Tali temple to increase the joy of life.