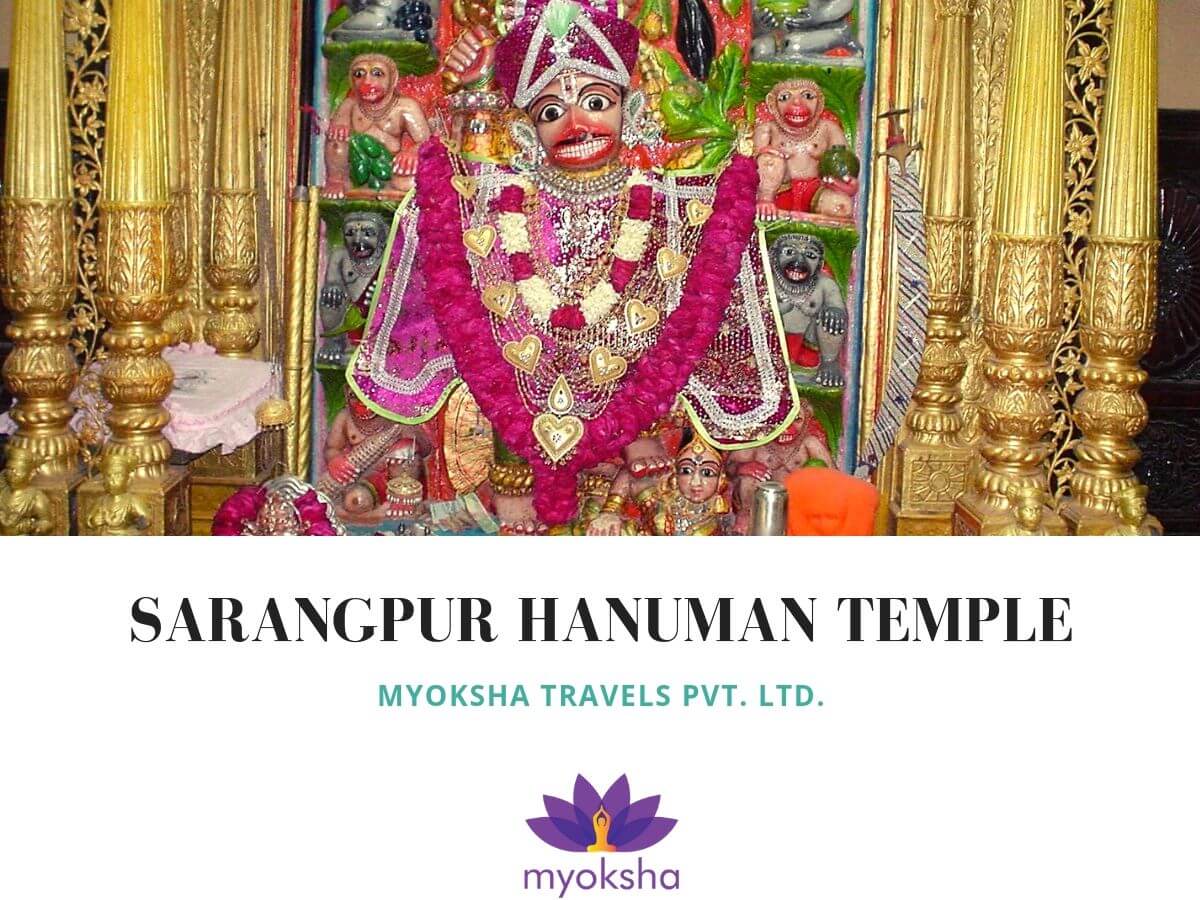 Sarangpur Hanuman Temple is considered to be one of the most sacred and holy temples in Swaminarayan Sampraday, created by Guru Swaminarayan. Situated in Sarangpur village of Ahmedabad district in Gujarat, here the presiding deity is the mighty Lord Hanuman who is revered in the form of Kastbhanjan i.e. remover of sorrows.

Sarangpur Hanuman Temple is open from 6 am to 12 pm. There is an afternoon break in darshan from 12 pm to 3 pm. The temple reopens again at 3 pm and closes at 9 pm. Mangla Aarti is performed at the temple in the morning at 5:30 am.

Devotees chant the Swaminarayan Mahamantra while going around the Sarangpur Hanuman Temple.

Mangla Aarti: “Jai Kapi Balvanta” is the Aarti of Sarangpur Hanuman Temple. The Mangala Aarti or Aarti which takes place at 5:30 am is done by waving a piece of lighted camphor in circles around an idol of God. The Deities offer the first darshan of the day, signifying the auspicious beginning of the day for devotees.

Shangar Aarti: Shangar aarti done at 7:00 am is performed every Tuesday and Thursday mornings. Shangar means adornments. During this aarti, the Deities are dressed and adorned.

Rajbhog Aarti: During the Rajbhog aarti takes place from 10:30 am to 11:00 am. Royal offerings of the mid-day meal are offered to the devtas.

Sandhya Aarti: This aarti is performed during the evening depending upon the timings of the sunset. Devotees gather to seek the darshan of the deity and offer their prayers during the Sandhya Aarti.

Shayan Aarti: After the Shayan Aarti, the darshan is closed for the devotees. It signifies that the Deities are about to retire for the night.

The people who are affected by evil spirits seek the blessings of Lord Hanuman to drive away the negative spirits by a single mere look.

Due to the blessing of Gopalanand Swami to Vagha Khachar, who invoked Hanumanji with his wand, to be ever present in the idol to drive out such evils. He decided to install the idol of Hanuman and dedicate his income to the temple. Till today, hundreds of devotees come to Lord Hanuman seeking his blessings so that their problems are eradicated and peace is instilled.

As the idol of the Lord Hanuman in the Sarangpur Hanuman Temple was installed by Gopalanand Swami, there are records of a writer named Raymond Williams which says that while installing the idol, Swami touched it with a rod that enthused life into it and made it move. Now this rod has been covered in silver color. This tale has turned into a belief amongst devotees who vouch for the healing ritual performed at this temple.

Hanuman Jayanti Mahotsav: Hanumath Jayanti is celebrated to commemorate the birth of Hanuman, the Vanara god, widely venerated throughout India. It is celebrated with great enthusiasm and spirit among the devotees of Lord Hanuman. Devotees from all over the country visit the temple to offer the prayers and to perform the rituals. The devotees visit temples and apply tilaka of sindoor to their foreheads from Hanuman’s idol. The event is celebrated on the 15th day of the Shukla Paksha, during the month of Chaitra

Sundar Kand: Sundar Kand is celebrated in the month of October or November. It is a book that depicts the adventures of Hanuman. Sundara Kanda is the only chapter of the Ramayana in which the hero is not Rama, but rather Hanumana. This lesson is recited by religious Hindus, preferably on Tuesdays or Saturdays.

Holi: Holi is a two-day festival which starts on the Purnima. The first day is known as Holika Dahan or Chhoti Holi while the second day is known as Rangwali Holi, Dhuleti, Dhulandi or Dhulivandan. It is identified as a festival that celebrated agriculture, commemorated good spring harvests, and the fertile land. Devotees arrive at the Sarangpur Hanuman Temple to celebrate this festival of colors.

If you wish to witness the sheer glory of the Kashtbhanjandev Aarti Darshan LIVE then see below. It is an extravagant affair where hundreds of Hanuman bhaktas pour in this shrine and seek the Lord’s blessings.

How to reach Sarangpur Temple?

By Air: Sardar Vallabhbhai Patel International Airport in Ahmedabad is the nearest airport. The distance between Ahmedabad to Hanuman Temple, Sarangpur is 159 km 903 meters. The distance and travel time would change accordingly and also as per the traffic and road conditions and it takes approximately 2 hrs 40 mins to cover the distance.

By Train: The distance between Botad Railway Station to Sarangpur Hanuman Temple which is 73 km and 168 meter. It takes approximately 1 hour 45 mins to cover the distance.

By Road: The Dhandhuka taluka (50 km) is well linked with all foremost towns and cities by road. There is also many bus stops situated at Sarangpur.

Hotels nearby: Where to stay?

There are many hotels available to stay near the Sarangpur temple. There is also a Dharamshala nearby. Some of the places to check in include:

Places to visit near Sarangpur

Shiv Shakti Temple: This temple is situated at Abhapur where the principal deity of worship is Lord Shiva. There are images of Surya Dev and his consort Suryani in the temple and hence, this temple is also known as the Sun Temple. The temple situated on a low height hillock is an excellent example of Nagar shaily. This Sun Temple is unique with it a statue of Lord Shiva, which showing different moods on the face as per your elevation of viewing, this is “Chaturangi” type temple.

Shree Jagannath Temple: The Jagannath Temple dedicated to the Hindu God Jagannath hosts the annual chariot festival, Rath Yatra. The rath yatra entourage passes through different parts of the city of Ahmedabad covering a distance of about 14-km.

Bhadrakali Maa Temple: Bhadrakali Maa Temple is known as one of the oldest and ancient temple in Located inside Bhadra Fort, Near Lal Darwaja, in the Ahmedabad city, Gujarat. Bhadrakali Temple was built during the ruler of Mega city Ahmedabad namely Aazam Khan. The Bhadra fort once encompassed Approximately 12 gates, 189 bastions, and 6000 battlements.

Ayodhyapuram Jain Temple: The temple is dedicated to Bhagwan Rishabh Dev, the first Jain Tirthankara. Shri Ayodhyapuram Teerth located at Gujarat is a Jain pilgrimage centre.  The teerth kshetra was built under the inspiration of Panyas Pravar Spiritual Head Sri Abhaysagarji Maharaj Saheb.  A large stone weighing about 300 tonnes was brought from a mine about 70 kms away from Jaipur to this place. The idol of the Lord was carved here. The walls and pillars of the temple are adorned with specimens of ancient art. The idol has been beautifully carved from a single stone.

ISKCON Temple: The ISKCON Temple in Ahmedabad is located close to the Gujarat Samachar Press. This temple dedicated to Lord Krishna and his consort Radha. The ISKCON Temple in Ahmedabad offers the perfect spot for mediation. The temple with its calm and peaceful atmosphere offers the perfect spot to spend some quiet time with oneself. The temple hosts festivals such as Janmastami which is the birthday of Lord Krishna and is attended by a large number of people from across the state.

Shri Bhimnath Temple: The Bhimnath Mahadev temple is located in Akot. According to the well-known archaeologist V H Sonawane, the period of the city’s founding can be traced from the pavement stones used at this temple which bear the mason marks dating back to the 2nd century BC. It was the spot where the first human settlement came up along the Vishwamitri River, which is almost 2,200 years ago.

What are the general temple timings of Sarangpur Hanuman Temple?

Am I allowed to take pictures inside Sarangpur Temple?

No, you are not allowed photography. It is strictly prohibited.

What is Sarangpur famous for?

Sarangpur is famous for its Shri Hanuman Mandir where devotees seek the blessings of the almighty Hanumana to eliminate negative spirits from their mind.