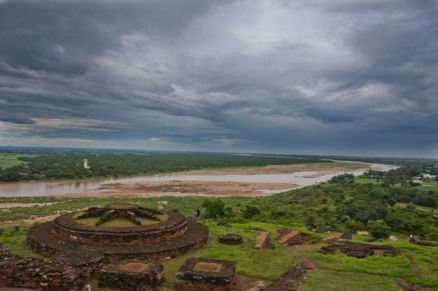 Salihundam is a village in the Srikakulam district of Andhra Pradesh. It was known as Salivatika, which means rice emporium. Salihundam lies on top of a hill on the south bank of the Vamsadhara River. It features ruins of a number of Buddhist stupas and a huge monastic complex on a hillock amidst scenic surroundings. It is about 9 miles from Srikakulam.

Salihundam is famous for numerous Buddhist stupas. These were discovered by Gidugu Venkata Rama Murthy, in the year 1919. Salihundam shows evidence that during the 2nd and 3rd centuries, Buddhism thrived in the local area of it. Therefore, it has become one of the main Buddhist excavation sites.

What is the history of Salihundam?

What is the significance of Salihundam?

The significance of Salihundam is that it holds a lot of archaeological importance owing to the existence of ancient monuments. There are a number of Buddhist stupas and a huge monastic complex. These are present amidst scenic surroundings. here’s distinct evidence of the presence of the ‘Vajrayana’ cult.  Buddhism spread to Sumatra and other far-eastern countries from here.

What are the timings of the Stupa?

The Stupa remains open for visitors from 6 AM to 9 PM.

What is the entry fees of the Stupa?

The entry fees to the Stupa varies from Zero to 10 rupees.

Simhachalam Temple is located nearby in Vizag.