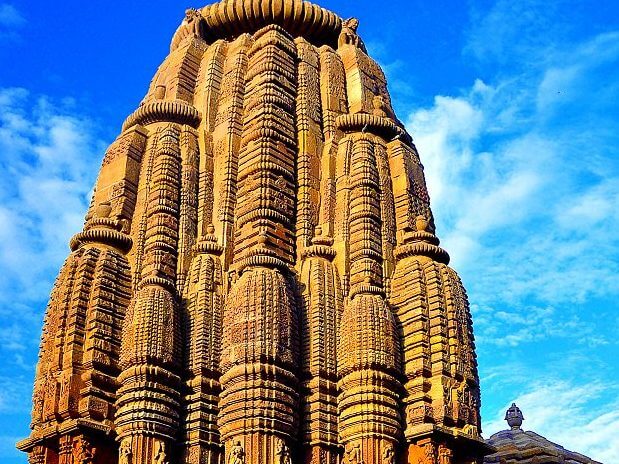 RajaRani temple is one of the most famous and renowned temple which is located in Bhubaneswar, the capital of Orissa. This temple was built between the 10th and 11th century from the wonderful red and gold sandstone, which is locally known as Rajarani and this is what gives the temple its name of ‘Raja Rani’. This temple is also known as the ‘love temple’ due to the carvings of women and couples in the temple. The temple is an embodiment of architectural stylishness and beauty. The sculptural imagery of the temple is stylish and dynamic. Various postures in the temple portray fascinating images of mundane life like a woman carrying child in the arms, and women appreciating their reflection in the mirrors.

The Raja Rani temple is surrounded by a beautiful garden and is located on open paddy field area. The accentuating miniature replicas of itself decorate the spire, reminiscent of the temples of Khajuraho. It has a square sanctuary and its interior and exterior surfaces are so recessed that it appears circular. The initial duel temples were without the jagamohana as seen in some of the older temples in Bhubaneswar while the later temples had two additional structures namely nata-mandapa which is the festival hall and bhoga-mandapa which is the hall of the offerings.

Significance of the RajaRani Temple

This temple remains open all days of the week from 6 AM to 6 PM. The best time to visit the temple is October and March. There is also an entry fee for this temple, Rs. 5 for Indians and Rs. 100 for Foreigners.

Festivals celebrated at the RajaRani Temple

RajaRani Music Festival: The Rajarani Music Festival held in the beautiful courtyard of the Rajarani Temple in Bhubaneswar is one such occasion to celebrate the richness and originality of Indian classical music. Evening concerts by great maestros of Indian Classical music fill the air with enchanting chimes. The city has a large assemblage of celebrated temples of which the Rajarani Temple is one of the most conspicuous. It’s remarkable for the absence any presiding deity in it. To showcase the glorious tradition of Indian classical music, the Rajarani Music Festival was conceived to be organized by the Department of Tourism in association with organizations like Orissa Sangeet Natak. Musicians from different parts of the country perform during the three-day festival. This festival is held during the month of January. Devotees from different places visit the temple during this period.

By Air: Biju Patnaik Airport around 6 km from the temple. There are different flights moving to Hyderabad, Nagpur, Kolkata, Delhi, Mumbai and Varanasi.

By Train: The nearest railhead is Bhubaneswar railway station 6 Km from the temple. The Rajdhani express departs from Delhi one day a week on Friday to Bhubaneswar. The Puri-New Delhi Express is a good train to Delhi. The Coromandel Express is also a good train that is going to Chennai. There are also direct trains to Delhi, Agra, Remuna and Varanasi. The city of Bhubaneswar is on the main Kolkata to Chennai line so all the important train stop here.

By Road:  Bermunda Bus stand in Bhubaneswar is the nearest bus stand. One can also travel from Puri buses to Pipli and then get another bus to Konark.

Hotels in Bhubaneswar: Where to stay

Tourists should try the authentic Oriya cuisine. There are varieties of food present for vegetarians as well as non vegetarians.The local specialties that one must relish are Machha Jholo (a fish curry), Gupchup, Cuttack Chaat, Aloo Dum, Dahi Pakhal, Badi Choora, Dalma, Santula and more. The sweets that are offered are Pithas, Kora-Khhaii, Rasabali, Chenna Gaja, Chenna Poda and Rasagola. Abadha or the vegetarian food served in temples is also delicious.

Bhubaneswar is also known as the city of temples where there are many famous temples around. Bhubaneswar holds the history of 2000 years.

Lingaraj Temple: The Lingaraja temple is said to have been built first by the ruler Yayati Kesari in the 7th century who shifted his capital from Jaipur to Bhubaneshwar. Its spire is around 180 feet tall. There are more than 64 smaller shrines in the sprawling temple complex as well. They are magnificently decorated with sculptures of gods and goddesses, kings and queens, dancing girls, hunters, and musicians. Legend has it that Shiva revealed to Parvati that Bhubaneshwar or Ekamra thirtha was a resort favoured by him over Benares. Only Hindus are allowed to enter the temple complex.  A total of 22 worship services are offered each day. Once a year, an image of Lingaraja is taken to the Jalamandir in the center of the Bindu Sagar lake.

Mukteshwar Temple: Mukteshwar Mandir is dedicated to Lord Shiva. The term ‘Mukteswara’ suggests “Lord who gives freedom through Yoga” and this is a fact. The splendid Torana of the temple, an ornamental arched gateway, is very much reminiscent of the influence of Buddhism in Orissa. Established in the year 950 AD. You will  find ascetics in various mediation poses on the temple, along with figures from Hindu mythology, folk tales from the Panchatantra (five books of animal fables), as well as Jain munis (monks/nuns). The temple stands within an octagonal compound wall that is based on the lines of structures built in the bygone times.

Brahmeshwar Temple: This temple was Constructed in the 9th century, the temple boasts intricate inside both in the interiors as well as exteriors of the temple. The temple was built by King Udyotakesari’s mother Kolavati Devi during the Somavamsi king’s 18th ruling year. The Brahmeswara Temple is highly applauded for its artistic sculptures that can be seen on the temple’s tower and porch. There are quite a number of tantric related images on the western facade. Shiva and other deities are also pictured in their frightening aspects.

Yogini Temple: Hindu mythology says there are 64 yoginis. A  yogini is an attendant of the Great Goddess. The cult is more or less linked to Tamtrik practises. There is a temple in Orissa dedicated to the 64 yoginis. It is made of black chlorite stone, Yogini Temple also known as Chausati Yogini temple (Chausati – 64) or Mahamaya Temple, is one among the four Yogini temples of India and second of its kind in Orissa. Large number of devotees gathered here to worship the Goddesses on a belief of attaining supernatural powers.

Vaital Deul Temple: Vaital Deul Temple, built during the 8th century, is a Tantric shrine, located near Bindu Sarovara.  The main deity worshipped in the temple is Goddess Chamunda, who is also known as the Tantric form of Goddess Durga. Chamunda Devi is depicted with a dazzling red tongue protruding out and wearing a garland of skulls. Image of Arjuna driving his chariot is also located at the temple. The best time to visit Vaital Deul Temple is during winters from October till March.

Rameshwar Deula: The Rameshwar temple is an ancient temple dating back to the 12th century A.D. Legend goes as when Rama was returning from Lanka after victory over Ravana,Goddess Sita asked to worship Shiva here.So Ramachandra built a Linga for that purpose. Historically the temple dates back to 9th century. There is also an image of the Durga that is worshipped within the sanctum. The vimana or the top portion of the temple is facing east while the detached jagamohana faces west.

Yameshwar Temple: This is a small temple built of soft sandstone. Yameshwar or Jameshwar Temple is a very old temple dedicated to Shiva being worshiped by Yama.It is situated in Bhubaneswar near Bharati Math,in Jameshwar Patna. There is a spacious courtyard with an imposing compound wall surrounding the temple premises. The recessed niches were once built to house the lingas.Different deities guide all the different part of the dhama. In the eight directions eight forms of Durga are installed: Maricika (east), Vimala (west), Ardhasini (north), Kalaratri (south), Bata mangala (southeast), Lambha (northeast), Candarupa (southwest), Sarva mangala (northwest).