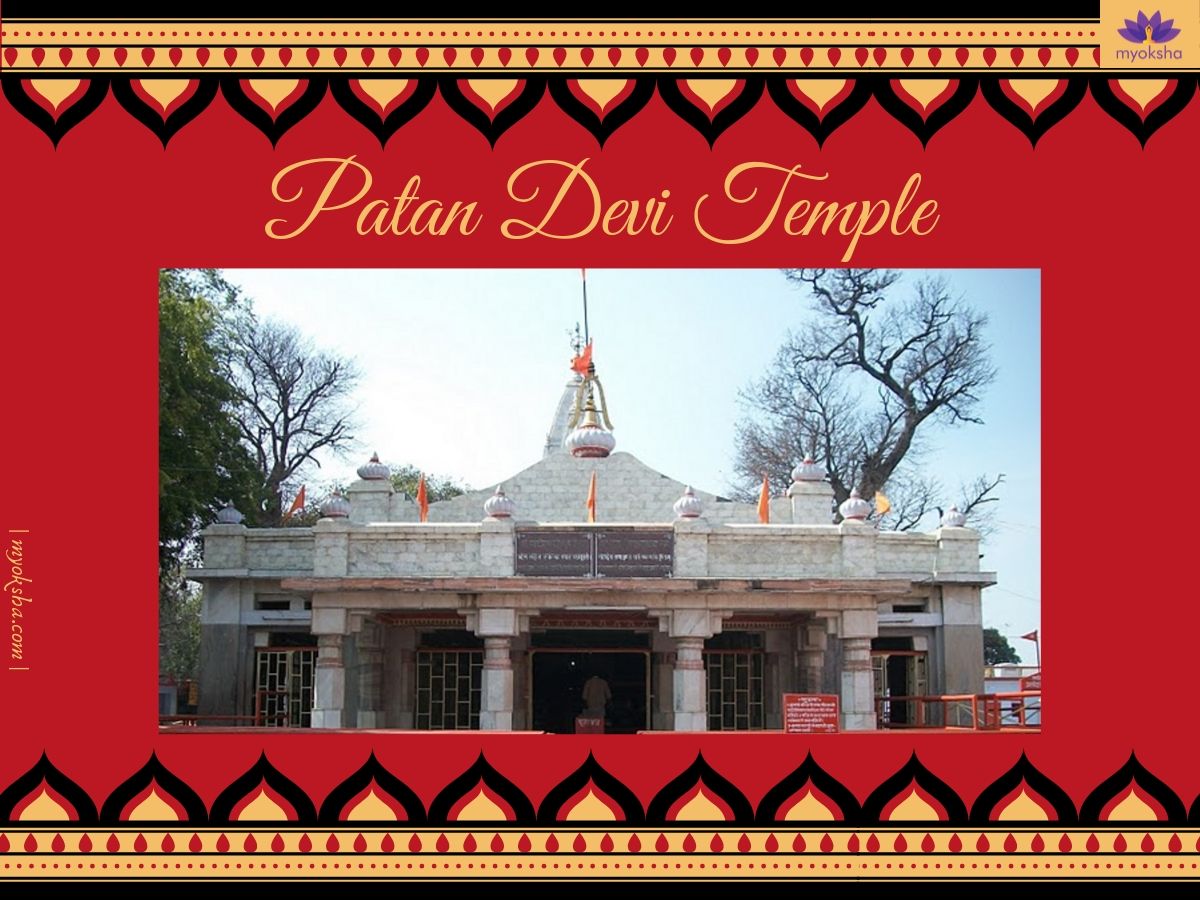 Patan Devi temple is one of the oldest and the most sacred temples of Patna, the capital city of Bihar state in India. This ancient temple, which was originally called Maa Sarvanand Kari Patneshwari, is believed to be the abode of the goddess Durga. The temple is regarded as one among the 51 Siddha Shakti Peethas of the country. So much so that the name of the city Patna was widely believed to be derived from the name of the Bari Patan Devi Temple. Although there are some doubts about this belief as some believe Patna derived its name Patan, which was a town and a big place of export and import in the region.

The Bari Patan Devi Temple of Patna had religious significance as it faces the North; towards the sacred Hindu river the Ganges. All the statues within this temple are made up of black stone. There is a huge portico of dimension 1.5′ x 15′ at the entrance of the temple. After the portico, there is a room of about 8′ x 8′ for the Gods namely, Mahakali, Maha Lakshmi, Maha Saraswati, and Bhairav. All these idols have been kept on Simhasans (thrones) hat are about 4 square feet in cross-section and have a height of about 7 feet. The first three goddesses are attired in sarees.

The Chhoti (small) Patan Devi temple is situated in Patna city in the Chowk area. This temple was once considered the main presiding deity of Patna. This temple has over the years slipped in eminence to the second position, after the Bari Patan Devi temple, as the presiding deity of the city. Thus, the names ‘Chhoti’ i.e smaller to the more popular deity and the “Bari” (bigger) Patan Devi have been decided. A historian by the name of Buchanan had been very specific in stating that the Chhoti Patendevi Temple that had held the primary position as Patna city’s presiding deity during the 18th and early 19th century.

Although the present temple does not carry any great antiquities in terms of idols and otherwise, still it is of historical significance. The temple has historical images that were, according to the local people, installed by Man Singh, the famous general of the Mughal emperor Akbar. The temple also houses a variety of intact as well as severed Brahmanical images, including Ganesh, Vishnu, and Surya.

Another set of images and open fragments of door jambs/lintels lay beyond the main temple, within its precincts. The broken Sun image among these is extremely impressive and most prominent. It is widely believed among the historians the some early medieval temple used to be there at the site of the temple which could be built sometime in 9th-11th Century A.D., which may explain the presence of the fragmentary stray sculptural/structural relics. It is believed that these ruins were reinstalled in the new temple which was built during the 16th-17th century by Man Singh. Although this is also a popular belief yet there is no authentic information on this count.

The puaranic legends attach a lot of significance to the historic Bari Patan Devi temple. It is believed that the ‘right thigh’ of the primary consort of Shiva, Devi Sati’s corpse had fallen here after it had been chopped off by Lord Vishnu with his ‘Sudarshan Chakra’.

Hindu mythology suggests that the right thigh of Devi Sati had fallen in Magadh and legend has it that the various parts of the Sati’s body fell in both Maharaj Ganj and the Chowk areas in the Old Patna city. Therefore, the Badi Patan Devi temple, as well as the Chhoti Patan Devi temple, had been built in these locations of the city. The Tantra Charumani states that the small images of the Bari Patan Devi Temple, Patna are the Goddess Mahakali, Mahalakshmi, and Mahasaraswati.

The three Goddesses are believed to have protected Putraka, who was the founder of Pataliputra according to Hindu Mythology. Another interesting aspect of the temple is the strange stone image that was found in a tank near the Bari Patan Devi Temple, Patna. This stone image has been kept in the eastern veranda of the temple and it is worshipped there regularly by the temple priests.

Significance of the Patan Devi Temple

Patan Devi temple has been regarded as one among the 51 Siddha Shakti Peethas in India. This ancient temple is considered to be the abode of Godess Durga since the right thigh of Sati who was considered Durga fell here according to legends ‘ when it was chopped by Lord Vishnu with his ‘Sudarshan Chakra.

Prajapati Daksha, who was the son of Lord Brahma and father of Sati performed Brihaspati Yagya but did not invite Lord Shiva, his son-in-law. Sati was mortified to know of this and she thus decided to put an end to her life. Lord Shiva at that point was in great anger and grief and took her corpse on his shoulder and began to perform Tandava dance round the three worlds. Thus, Gods requested Lord Vishnu to do something and he followed the dancing Shiva and started cutting the dead body of Sati to pieces with his Chakra. Resultantly the major limbs of the Sati’s body fell on the places that are today the Mahapeethas. The places where the minor limbs had fallen came to be known as Upapeethas.

During the Navratri festival and at the time if Dusshera, a fair is held at the temple as is the case with many other places. The major days of pooja during the festival are Saptami, Ashtami and Navami (Durga Pooja) when around 600 people came to offer prayers daily at either of the two temples. The visitors bring sweets, garlands and fruits for the deity on the occasion. The temple priest takes some quantity of the prasad and then returns the rest to the devotees. The priest marks the forehead of the devotee with Rori (red powder). They also offer some money to the priest in the form of Dakshina.

The fair conjures the people attending the worship of their religious pursuits with the merriment enforcements. Many Siddha Yogis and priests also attend the fair to offer special poojas to attain tantric vidhyas during the occasion.

The major rituals at the temple similar to most Hindu temples is as per the routine where the deity is daily bathed in the morning and evening followed by the offerings of prasad (fruits and sweetmeats etc.) which is followed by aarti with the reciting of hymns by the priest, accompanied by conches and the ringing of bells.

How to reach by Rail, Road, and Air

Patna is a major city of India and is well connected to all parts of the country by trains, airways, and road. Following are the major railways, roadways, and airways of the city:

Patna is one of the major cities of India and this has many 5 stars and 4-star hotels as well as guest houses, motels, and lodges. The major hotels include Ramson’s International, Element Guestline, Hotel Amit Inn, the Panache, Frontline Residency and Hotel Maurya Patna.

Pataliputra is located adjacent to the modern-day Patna and has been a significant city of ancient India. The city was originally built by the Magadha ruler Ajatashatru in 490 BCE as a small fort near the Ganges River. Archaeological excavations have been made extensively in the vicinity of the modern Patna and excavations early in the 20th century around Patna had revealed clear evidence of large fortification walls that included reinforcing wooden trusses. The place is most important of Buddhist sites in India and many followers of Buddhism visit this place as it was where Buddha breathed his last.

Following are some of the major temples in Patna:

What are some other temples to visit in Bihar?

Apart from the above temples, Patna also offers many other tourist attractions that are a must-visit which you must during your visit to Patna.

So take out some time to relish the holiness of the Patan Devi temple and the city of Patna and ensure the most pious and religiously blissful experience of your life with thousands of devotees who come to seek holy blessings.