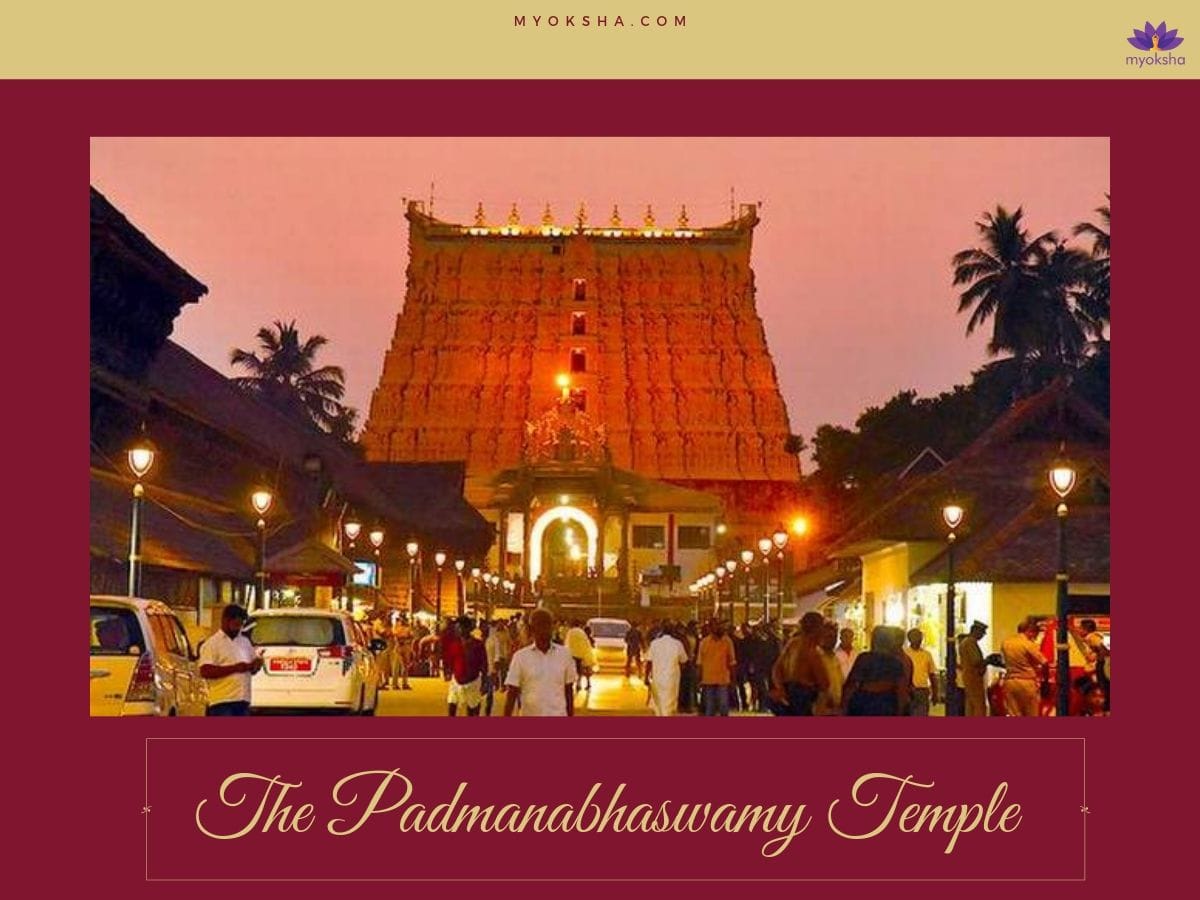 Planning to visit the Padmanabhaswamy Temple? Have a look at our Kerala Temple Tour Package.

What are the timings of Padmanabhaswamy Temple?

Sree Padmanabhaswamy Temple opens at 3:30 AM and closes at 7:20 PM. The temple also performs various rituals during this time. The devotees can be a part of these rituals, such as the morning, afternoon, and evening poojas.

Sree Padmanabhaswamy Temple is closed for darshan between 12:00 PM to 4:00 PM.

What are the poojas and sevas at Padmanabhaswamy Temple?

What is the significance of Padmanabhaswamy Temple?

The significance of the Sree Padmanabhaswamy Temple is one of the 108 Divya Desams (holy abodes of Lord Vishnu) glorified in the famous Tamil literary work Divya Prabandha by the Tamil Alvar Saints between the periods of 6th to the 9th century. In the 8th century, Alvar named Nammalvar sang praises of Sri Padmanabha.

The main idol of the presiding deity is awe-inspiring and unique in itself. The idol is made of 12,008 Shaligramam stones (the aniconic form of Lord Vishnu, taken from the banks of the Gandaki River that flows through India and Nepal). The Lord reclines on Adi Shesha Naga with his right hand atop the Linga of Lord Shiva. Lord Brahma can be seen appearing out of the navel of Lord Vishnu on a Lotus. The two consorts of Lord Vishnu can be seen accompanying him on his sides. To a devotee, the idol is visible through three doors, the first one showing Lord Vishnu with hands-on Lord Shiva, Goddess Sridevi and Lord Brahma are visible through the second door and Goddess Bhudevi and Kaudinya Muni through the third door.

The Katusarkara Yogam, which is a special Ayurvedic mixture of Herbs is plastered over the whole idol of Lord Padmanabha. The paste keeps the idol of the deity clean.

It is believed that the Thiruvambadi shrine dedicated to Sri Krishna Swamy situated inside the main Temple complex predates the main shrine. The shrine is built on the site where Sage Vilvamangalathu is believed to have been buried.

It is been established that six sealed vaults are present beneath the temple premises. The contents of these vaults are considered highly valuable and a secret. Among them is the valued Vault B. It remained closed to the public for centuries. However, on an order of the Supreme Court of India, the vault was opened and treasures were discovered whose value is estimated to be about 1 Trillion US Dollars. A small antechamber within the vault still remains closed to the public as the doors are extremely hard to open and are carved with figures of snakes. It is believed that opening the vault will displease the Lord and create havoc in the region.

What is the history of Padmanabhaswamy Temple?

According to history, the exact date or year of construction for the temple is unknown. However, the temple, as well as the city, has been mentioned as the Golden Temple in the Sangam literature (Tamil literature) as early as 500 BC and 300 AD. Many scholars believe that the whole city surrounding the temple was extremely rich and was covered in gold.

It is believed by scholars that the temple was a site of worship since the beginning of the Kaliyuga. Several records written on Palm Leaf have been handed down through several

As per the legend, Sage Vilvamangalathu Swamiyar performed Tapasya or Penance for obtaining a Darshan of Lord Vishnu. The Lord is believed to have presented himself to him as a small mischievous orphan boy. The Sage allowed him to stay with him on the condition that he will not disturb him during his prayers. After some days, the boy disrupted his Pooja by defining the image of the Lord. The Sage became angry and chased the boy away. Just before leaving, the boy told the sage that is he wants to find him, he must visit Ananthankadu.

The Sage realized that the boy was the Lord himself. He turned repentant and searched Ananthankadu. He eventually found the boy merging into the “Illuppa Tree” (Indian Butter Tree). The tree fell down and transformed into a huge figure of Lord Vishnu in the Anantha Shayanam form. The figure was so huge that the head lay in Thiruvallam (5 km from the Anantha Padmanabhaswamy Shrine) and the feet lay at Trippapur (8 km on the other side).

Overwhelmed by the occurrence, the Sage requested the Lord to condense his form so that he could witness his entire form. As per his wish, Lord Vishnu shrank his form. The Sage immediately offered a dry mango in a Coconut shell (the same is offered to the deity till date). The spot where the Sage was given a darshan belonged to Koopakkara and Karuva Potti. A small shrine was built at the site with the help of local Brahmins.

Padmanabhaswamy Temple’s architecture is a mix of the Kerala style and the Dravidian style of architecture. The temple architecturally resembles the Adikesava Perumal Temple located in Kanyakumari, Tamilnadu. The Gopuram is dated to the 16th century. The idol of the deity in the main sanctum is mesmerizing and a treat to any devout Hindu. The Lord can be seen reclining on the Shesha Naga with his hand placed on the Shiva Lingam.

Several features of the architecture of the temple are worth noticing. The temple has nine entrances representing the nine orifices of the human body. The Ottakal Mandapam is carved out of single granite stone. The pillars at the corners of the Kulashekara Mandapam produce musical notes when they are struck.

The Moolasthanam or the Garbhagriha of the Temple is located at the Ananthapuram Temple in Kasargod, Kerala. The antiquity and the historical significance of the Temple can be adjudged by the fact that shrine is mentioned in several Puranas like the Skanda Purana, Brahma Purana, Bhagavata Purana, Padma Purana, Matsya Purana, and the Varaha Purana.

The Sabha Mandap is called the Ottakal Mandapam as it is carved out of a single rock. Besides the main shrine, the temple also constitutes the shrines of Sri Ugra Narasimha (Thekkadom) and Sri Krishna Swami (Lord of Thiruvambadi or Parthasarathy). Apart from these two subsidiary shrines, small shrines dedicated to Lord Rama, Sita and Lakshman, Lord Ganesha, Lord Sastha, Garuda, Hanuman, and Balarama.

What is the dress code at Padmanabhaswamy Temple?

The entry to Sree Padmanabhaswamy Temple is restricted to Hindus only.

What are the festivals celebrated at Padmanabhaswamy Temple?

Some of the other important festivals celebrated at the temple premises are Ashtami Rohini (Krishna Janmashtami), Vinayaka Chaturthi, Navaratri, Mahashivarati, and Ram Navami.

How to reach Thiruvananthapuram?

Where to stay near the Padmanabhaswamy Temple?

A large number of hotels and lodges are dispersed throughout the city. They offer quality and clean accommodation to the visitors. Some of the five-star options are Vivant any Taj and Hilton Garden Inn. Medium range and budget hotels are available easily. However, advance booking is preferred, especially during the peak season.

Where to eat near the Padmanabhaswamy Temple?

Thiruvananthapuram is a bustling city that offers a wide variety of culinary delights to visitors. The city is famous for fresh and delicious seafood. Some of the most popular food joints that one must visit are Hotel Rahmaniya (home of the patented Kethel Chicken Fry), Zam Zam, Sree Guruvayurappan Hotel, and Ayswariya Hotel. The local Kerala Cuisine is simple and delicious. One must try Appam, Puttu, Curry Meen, Fish Moile and Kappa Biryani when visiting the city.

What are some temples near Padmanabhaswamy Temple?

If you have any questions about The Padmanabhaswamy Temple, please leave a comment below, and we will get back to you within one hour.