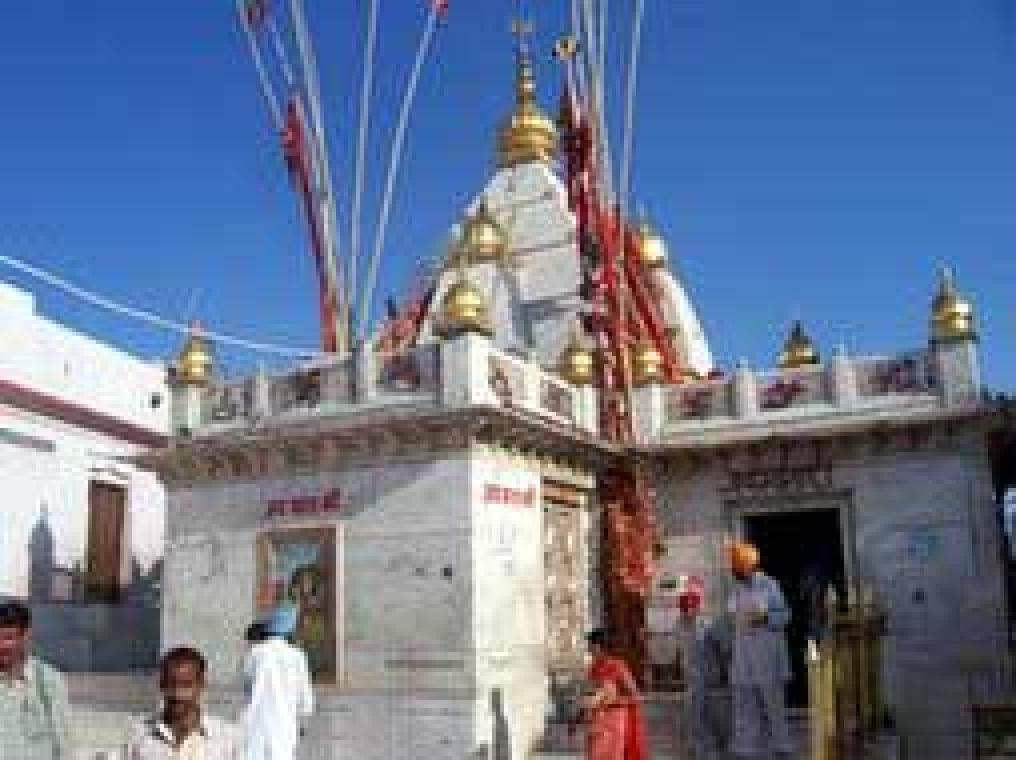 Naina Devi Temple is located in Himachal Pradesh and is one of the 51 Shaktipeeths. The temple has presiding deities belonging to both Hindu as well as the Sikh community. Naina Devi was named after the famous mythological story about Goddess Sati. As the temple is one of the Shaktipeeths, it signifies the place of strength i.e Shakti in Hindi.

Naina Devi Temple is located on a triangular-shaped hill also known as Naina Dhar hill, which is 3535 feet above the sea level. The temple attracts a large number of worshippers as the place is believed to be the famous shrine of Goddess Sati. One of the popular hill resort located in Himachal Pradesh known by the name of Nainital has been named after the famous Naina Devi temple. This one of the places where the devotees can have a completely spiritual experience, with breathtaking views on the way and at the temple. People from every part of the country come here to seek blessings of Naina Devi Maa. It is situated 20 km from Anandpur Sahib and is surrounded by famous landmarks of Bhakra Dam, Anandpur Sahib, and Govind Sagar Lake.

One more famous tale is associated with the temple is of the great Sikh Guru Gobind Singh. when he left for his military campaign against Mughals in1756, he performed a sacrificial yagna to seek blessings of the Goddess. After getting the blessings, he eventually defeated the Mughals in the battle and that’s why the place is called the “Temple of Strength”

Vasant Panchami: Dedicated to Goddess Saraswati, Vasant Panchami spreads the yellow color all around. The goddess is dress in yellow and worshipped with Puja and Yajna. People wear yellow clothes and share yellow hue sweets with their friends & relatives. The festival falls in February.

Maha Shivratri: Also known as Great Night of Lord Shiva, Maha Shivratri is dedicated to worship of Lord Shiva and Maa Parvati. Some people fast on this day while others celebrate it by reciting Shlokas and singing bhajans. The celebrations and worship continue till late night when devotees offer fruits, coconut, Ganga Jal and Bilva leaves to Lord and Goddess. The festival falls in February.

Holi: The festival of Holi is to celebrate the triumph of good over evil. According to the legends, the demon Hiranyakaship wanted to kill his son Prahlada because he was a devotee of Lord Vishnu. So, the demon made a plan with his sister Holika to kill the son. Holika tried to kill Prahlada and sat with him in the fire. She died in fire and Prahlada rescued. The festival falls in March.

Ram Navami: This festival celebrates the birth of Seventh Avatar of Lord Vishnu; Shri Rama who was born on the 9th day of Chaitra month. Shri Ramchandra killed the evil king Ravana. The festival falls in April.

Raksha Bandhan: The festival of Raksha Bandhan denotes and further strengthens the bond of brother and sister. Still celebrated in a traditional manner, a sister ties Rakhi on the wrist of her brother and expresses her love. In return, brother promises to protect her forever and offers her gifts. The festival falls in August.

Shri Krishna Janamashtami: Also known as Sri Krishna Jayanti and Krishnaashtami, this day is celebrated as birthday of Lord Krishna. The festival falls in August.

Dussehra: Also known as Vijaya Dashmi, Dussehra is celebrated as the day of victory of Shri Rama over Ravana in Satya Yug. Demon Mahishasura was also defeated by Goddess Durga on the same day. The festival falls in October.

Karva Chauth Vrat:On Karva Chauth, married ladies observe a rigorous fast without meal and water so as to pray for long lives of their husbands. Nowadays, young girls also observe this fast to get good life-partner. The festival is celebrated mostly by North Indians and falls in October.

Diwali: Diwali or Deepawali signifies the return of Lord Rama after 14-years of exile from Ayodhaya. The night of Deepawali is celebrated by lights and fireworks. The festival falls in November .

New Year Eve: Every year, the New Year Eve is celebrated with great zeal in the temple. The entire complex is decorated combined with special Pooja of Shri Naina Devi Ji.

By Air: The nearest airport is the Chandigarh International airport which is about 100 km from Naina Devi temple.Domestic flights are available from the main cities i.e Bangalore,Delhi,Mumbai,Bhubaneshwar,Ahmedabad, Hyderabad,Kochi,Shrinagar and Chennai.One can hire taxis directly to Naina Devi Temple or can take trains running between Chandigarh railway station and Anandpur sahib by coming to chandigarh railway station from airport which is 16 kms from the airport.

By Road:The temple is connected with national Highway-21.Transport bus services are provided by the government of Punjab and Haryana from all important cities.One can also take bus from delhi which is located about 350 km from the temple.

By Air: Connecting flights are available from Delhi where one can reach Chandigarh airport and from there hire taxis directly to the temple.

By Train:There are trains available between Delhi and Anandpur Sahib railway staitions.One can hire taxis from Anandpur station which is situated at a distance of 30 km from the temple

By Road:Naina Devi Temple is located on the National Highway,thats why becomes easy for the worshippers coming by road.Delhi is at a distance of 350 km from the temple and transport buses are available to and fro from Naina Devi and Delhi.

By Air:Connecting flights are available from Mumbai where one can reach Chandigarh airport and from there, hire taxis directly to the temple.You can take IndiGo (flight) from Mumbai to Chandigarh then take Uhl Janshatabdi(train) from Chandigarh to Anandpur Sahib

By Road:There is no direct bus between Mumbai and Anandpur Sahib. You can take Paschim Express(train) from Mumbai to Jalandhar then take State Transport Bus from Jalandhar to Anandpur Sahib

Free stay maintained by temple trustees:Trust has constructed the Patiala Dharamshala, langar and another motel near langar area that provides free staying facility to 1,000 devotees.

Paid stay maintained by temple trustees:Temple Trust has also constructed Matri Aanchal,Matri Chahya and Matri Sharan  staying shelters with a capacity of 45 rooms and 14 dormitories. The cost of staying at these places is very nominal and affordable.

Also,there are lot of Private hotels and lodges available which are at a close proximity to Naina Devi temple.Good rated hotels are available where one can accomodate.