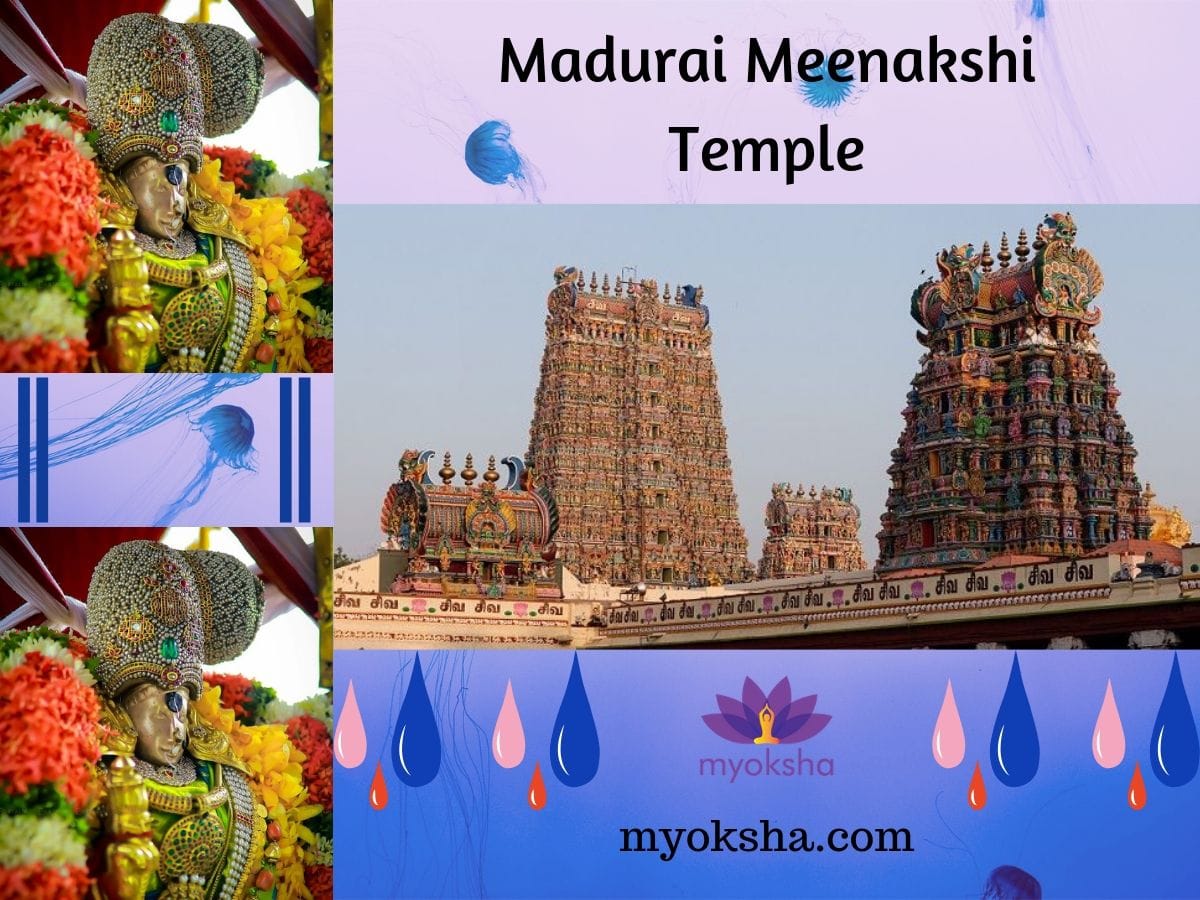 Such is the love and devotion of people towards the Goddess that no one who visits the city even thinks about leaving it without seeking her blessings.

Timings of Daily Poojas and Rituals of Madurai Meenakshi Temple

Details of different Poojas and Rituals of Madurai Meenakshi Temple

Men and women with exposed shoulders and legs are not allowed to enter the Madurai Meenakshi Temple premises. The main sanctums of Goddess Meenakshi and Lord Sundareshwara are open to only Hindus. However, visitors can view the Mandapams and the other architectural features of the Temple.

In the 14th century, there arose an internal disharmony over the succession to the throne after the downfall of the Pandyas dynasty. Taking advantage of the dispute, Ala-ud-din Khilji of the Delhi Sultanate sent his general Malik Kafur in 1310 to invade Madurai.

When he reached Madurai, he pulled down the Temple towers and destroyed several sculptures and historical records. However, the main shrine of Meenakshi Amman and Sundareshwara were left intact. This incident led to the beginning of the spread of Islam in southern India, especially in Tamil Nadu.

The Madurai Meenakshi Temple was then expanded into its current state under the reign of Thirumalai Nayak during 1623 – 1655.

According to the legends, the Pandyan King Malayadhwaja, and his queen Kanchanamala were childless and performed “Putra Kameshti Yagna” for a child. Lord Shiva was appeased and requested Goddess Parvati to be born to them. She obliged and arose from the sacrificial fire as a little girl with three breasts.

The king was worried but was assured by the Lord that the third breast will disappear once she meets her match. The girl was named Taadanthagai and was brought up as a princess. At the time of her coronation, she waged war against the three holy kingdoms of Sathyaloka (Brahma’s abode), Vaikunta (Vishnu’s abode) and Amravati (Devas’s abode).

After defeating them all, when she reached Kailash to defeat Lord Shiva, she stopped as she realized that Lord Shiva was her divine companion. Her third breast disappeared at the spot. She realized that she was the avatar of Goddess Parvati. It was decided that they will marry and rule the city of Madurai together.

On the day of the marriage, Lord Shiva came to the wedding ceremony without anyone accompanying him except a dwarf named Gundodara. Meenakshi was surprised and haughtily remarked that all the wedding arrangements will be wasted as there were not many attendees on behalf of the bridegroom.

Lord Shiva challenged them to fulfill the needs of the dwarf. The king fed the dwarf everything from the wedding kitchen as well as every dish prepared in the city that day, but the dwarf could not be satisfied. When there was nothing else left to eat, he demanded water to quench his thirst. The city’s water supply was exhausted.

The marriage was a divine occurrence and was attended by all the Gods and the Goddesses. Lord Vishnu was supposed to attend the event but was delayed by Indra. Angered, he left to Alagar Kovil but was eventually convinced by Lord Shiva. The event is described as Alagar Thiruvila and is still celebrated.

As per another legend, a Lotus-shaped city was built by the Pandyan King Kulasekhara around the Shiva Linga (Sundareshwara) worshiped by Lord Indra. It is believed that Lord Shiva was impressed by his devotion and blessed him.

A unique fact that can be observed about the placement of shrines is that the shrine of Lord Sundareshwara is exactly one-fourth of the total area of the Madurai Meenakshi Temple. The shrine of Goddess Meenakshi is exactly one-fourth of the area of Lord Sundareshwara’s shrine. This might indicate that in the earlier times, Lord Shiva was given ritualistic importance over Goddess Meenakshi.

Madurai Meenakshi Temple Temple has four main entrances, one in each cardinal direction. The four Gopurams of each of the main entrances are intricately carved depiction sculptures of several Gods and Goddesses, holy animals and even demons.

Chitthirai Brahmotsavam or Arulmigu Thirukalyanam – The grand festival of the wedding between Lord Sundareshwara and Goddess Meenakshi is celebrated for a period of 12 days in the month of Chitthirai (April).

Aavani festival – The important festival is celebrated for 18 days during the month of Aavani (August). This marks the event of the coronation of Lord Sundareshwara as the King of Madurai.

Navarathri – The festival dedicated to Goddess Amman is celebrated in a grand manner for ten days. The idol of the Amman deity is decorated in a different manner on all the nine days and her blessings are sought by thousands of pilgrims.

Teppotsavam – The float festival is annually held in the city during the Tamil month of “Thai” which happens in January. The idols of Goddess Meenakshi and Lord Sundareshwara are taken around in a grand procession in the waters of the famous Vandiyur Mariamman Teppakulam.

Some of the other major festivals celebrated at the Madurai Meenakshi Temple are the Maasi Mandala festival in February, Kanda Shashti in November, Deepavali, Oonjal festival, Aadi Moolaikottu festival, Vasanthotsavam, Arudhra Darshanam, Thiruvenbavai, and Thiruppavai festival.

How to reach Madurai Meenakshi Temple

Where to stay in Madurai

Where to eat in Madurai

The city of Madurai is called “Thoonganagaram” meaning “the City that never sleeps”. It is a fact that the city offers unparalleled culinary delights to everyone who visits the city throughout the day and the night.

Other famous temples in Tamil Nadu are:

Where can we store our personal belongings in Madurai Meenakshi Temple?

You can safely store your camera and other belongings inside a locker at the stall that minds shoes at the east entrance to the temple.

What are the other highlights for tourists for sightseeing in Madurai Meenakshi Temple?

There’s a set of musical pillars and Art museums that are worth seeing as well. Tickets cost 50 rupees for foreigners and 5 rupees for Indians.

What is the cost of the “special darshan” tickets in the Madurai Meenakshi Temple?

These tickets provide direct access to the idols and can be purchased inside the temple. They cost 50 rupees solely for Goddess Meenakshi, and 100 rupees for both deities.

What are the main attractions of Madurai Meenakshi Temple?

The main attraction of the temple is its golden lotus pond, long corridors inside the temple and gopurams, temple museum and the thousand pillar hall.

When is the best season to visit Madurai Meenakshi Temple?

The best season for tourists to visit Madurai Meenakshi temple starts from May to July.

What is the language preferred by the locals in Madurai Meenakshi Temple?

The most preferred language is Tamil and English.

What is the altitude of the Madurai Meenakshi Temple?

Madurai Meenakshi temple is located at an altitude of 141m.

Is the guide facility available in Madurai Meenakshi Temple?

Since Madurai Meenakshi temple is spread over 16 acres, you can hire a guide if you have an architectural inclination, but beware of ‘guides’ who try to lure you into nearby shops.

If you have any questions about the Muktinath Temple, please leave a comment below, and we will get back to you within one hour.