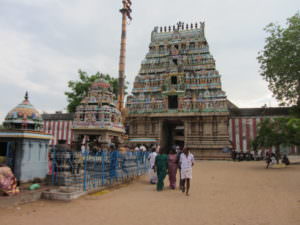 Sri Naganathaswamy Temple or Rahu Sthalam in Tamil Nadu is one of the 9 Navagraha Temples and is dedicated to Rahu. The Presiding Deity is Lord Naganathaswamy. Shrine is adjacent to Naganathaswamy’s shrine and GiriGujambika with Lakshmi and Saraswathy by her side has a separate temple.

What is the history of Thirunageswaram?

Here Rahu Bhagavan has manifested with both his consorts.

King Sambumali who had incurred the wrath of sage Kaalangiri, attained moksha after bathing in the temple tank and praying to the Lord and Ambal of this temple. Then the devas and asuras churned the Paarkadal to obtain amirtham that would free them from death, keeping them alive for ever.

When the amirtham emerged, Lord Vishnu in the guise of Mohini was distributing the amirtham only to the devas. He was worried that the evil deeds of the asuras will increase multifold if they consumed amirtham. Realising this, one of the asuras with the help of the asura guru Sukrachariyar, took the form of a deva and consumed the nectar. Suryan and Chandran who noticed this, complained to Lord Narayana.

In anger, Lord Narayana hit the asura on the head with the spoon in his hand. The head was cut off and fell on the ground. But because the asura had consumed amirtham, his head and body continued to live. The body of a snake got attached to the head to become Rahu Bhagavan. Rahu prayed to Lord Vishnu (Narayana) and got the position of a Sayagraham. Rahu takes his revenge on Suryan and Chandran, whenever he gets a chance by devouring them. People commonly call this as eclipse.

What is the significance of Thirunageswaram Temple?

Here’s the significance of Thirunageswaram Temple:

What are the timings of Thirunageswaram Temple Temple?

Here are the timings of Thirunageswaram Temple:

What are the festivals celebrated at the Thirunageswaram Temple?

Some of the festivals celebrated at Thirunageswaram Temple are:

Chithirai Brahmmotsavam: Chithirai Brahmotsavam is the celestial celebration of Devi Meenakshi’s divine marriage with Lord Sundareshwara. Also, Therottam or Car Festival occurs on the 11th day of the festival. Moreover, Kumkumarchana is the offering of personal puja in your name in which there is chanting of different names of Devi Meenakshi along with the offering of Kumkum – vermillion. Women also offer Kumkumarchana for receiving special blessings for fulfilling their wishes.

Thai Poosa star float festival: Float festival occurs on the Full Moon Day of the Tamil month of Thai (come in between mid Jan- mid Feb) every year. On the festive night, devotees decorate the images of goddess Meenakshi as well asLord Sundareswara with ornaments and take them out in a colourful procession to the huge Mariamman Teppakulam. Also, the unique character of the Thai Pusam is the astonishing parade of people bearing kavadis.

Adipooram: The day of Aadi Pooram is also the day of Goddess Shakti as devotees believe that the Goddess herself comes to Earth in this auspicious day, to bless her devotees. In the temples, priests adorn Goddess Andal wiith silk saree, glittering jewelleries and garlands. There is also an elaborate feast to the Goddess in which every household in the community contributes.

Masi Magam:  The festival falls in the Tamil Month of Masi (February – March). In this festival various traditional customs take place like bringing the deities from the neighboring temples around Karaikal. Also, many devotees come to take holy dip in the sea to cleanse all the sins. The most significant deity is Sowriraja Perumal of Thirukannapuram.

What are the poojas and Rituals of Thirunageswaram ?

The poojas are rituals of Thirunageswaram are:

How to reach Thirunageswaram Temple?

Here’s how to reach Thirunageswaram Temple:

Where to stay in Thirunageswaram?

Some of the places wehre one can stay in Thirunageswaram are:

Where to eat in Thirunageswaram?

Some of the places where one can eat in Thirunageswaram are:

What are some temples near Thirunageswaram temple?

Some temples near Thirunageswaram temple are:

Thirunallar Temple: Sri Darbaraneswarar Temple is the abode of Lord Shani(Lord Saturn). The Temple is also most famous to Lord Shaneeswarar (Saneeswaran in Tamil), one of the 9 Navagrahas(Nine Planets). Various poojas are also offered to Lord Saneeswara(Shani) Bhagawan every day. Moreover, the other deities of the shrine are Swarna Vinayaka, Lord Subramaneswara Swamy and Thyagarajar.