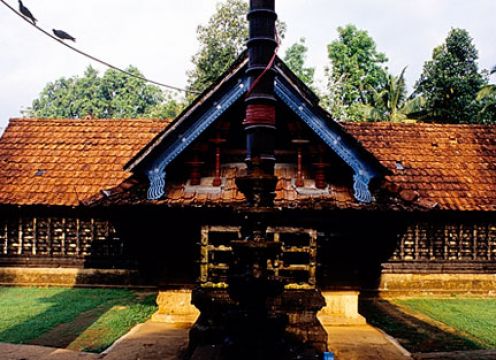 Lokanarkavu Temple is located in Kozhikode District of Kerala. Lokanarkavu is a short form of Lokamalayarkavu which means lokam (world) made of mala (mountain), aaru (river) and kavu (grove). It is the official family temple of the 500 Aryan Nagariks who had migrated to Kerala and their successors.

The main deity in the Lokanarkavu temple is Goddess Durga. It is adjacent to two shrines dedicated to the Lord Vishnu and Lord Siva. The dance, performed during the festival is Thacholikali. It resembles the martial art Kalarippayattu. Kalaripayattu artists seek the blessings of the deity of lokanarkavu temple with legendary hero Thacholi Othenan. The main temple, according to legend is 1500 years old.

Significance of the Lokanarkavu Temple

Lokanarkavu temple remains open from 4 AM to 9 AM in the morning and 5 PM to 7 PM in the evening.

Festivals celebrated at the Lokanarkavu Temple

This main festival of the temple, which lasts for 41 days. It is held during the Malayalam month of ‘Vrischikam’ (mid-November to mid-December). It is locally known as ‘Mandalavilakku’ Festival or ‘Mandala Utsavam’. A folk dance called ‘Thacholikali’ is performed during the temple festival. ‘Thacholikali’ is similar to the traditional martial art form called ‘Kalarippayattu’. Large numbers of people from various places flock here to see this festival. People come together to lit the lamps in the temple and the sight is worth seeing.

Meenam Festival is celebrated for eight days with ‘Kodiyettam’ (flag hoisting) on the ‘Rohini’ day. The traditional dance performance of ‘Theyyambadi Kurup’ is the special attraction on the fifth and the sixth days. On the seventh day is the ‘Nadu Valam Vekka’ and ‘Pallivetta’ (holy hunt). On the ‘Pooram’ day is the ‘Poorappattu’ and ‘Poorakkali’ (a traditional dance ritual performed by men). ‘Poorakali’, conducted during the night, is a fascinating event. ‘Poorappattu’ includes the theme from the life history of the Goddess. The idol of the goddess is taken for ‘Arattu’ on the ‘Pooram’ day.

Earlier rulers of Kerala used to worship goddesses by following Thamasa Pooja or Shakteya Pooja. According to this pooja, either man or animal was sacrificed to the goddess.  As time passed, this tradition was followed by generation to generation. It was followed by the local people as well as the kings of Kerala. Later, this tradition was replaced with chopping plantain or performing Poojas by making use of tender coconut and cereals, owing to the Aryanisation of temples.

By Road: Lokanarkavu Temple is situated at Memunda about 6 km from Vadakara. National Highway 17 passes through Vadakara, and the place is around 48 km north of Kozhikode. Kerala State Road Transport Corporation (KSRTC) and several private bus owners operate frequent bus services to Memunda.

There are several food joints and restaurants nearby that serve delicious food. It is a blend of ingredients with culinary art. Here are some of the best places that serve the most luscious food in a comforting atmosphere to the tourists.

Sree Valayanad Devi Temple: The Valayanad Devi temple was built in the 14th century by the Zamorins. The temple, which faces north, has four gopurams(towers).  The Devi temple at Valayanad has its own distinct identity and is different in several respects from other Devi temples in India. The poojas in this temple are performed in accordance with the practice of Guruji worship.  Goddess from Kashmir known as Chandika is known as the presiding deity of this temple. The Goddess is also called Mahartham and Kalasarppini. The annual festival commences every year on the day of Karthika of Makaram and continues for seven days.  There are five Moosad families residing around the Shri Valayanad Kavu.

Azhakodi Devi Temple: The samoothiri entrusted six of his generals to the temple Arikkodikkavu which is presently renowned as Azhakodi Devi mahashekthram. An idol of ‘Bhavani Devi’ was given by the samoothiri which was gifted to him by the traders of Gujarat. The generals were instructed to place the idol adjacent to the ‘Bhagavathi Idol’ in the ‘Arikkodikkavu’ sreekovil and worship the same.

Tali Mahakshetram: The Tali Siva temple was one of the two Brahmanical royal temples patronized by the Zamorin. And to this day remains one of the most important spiritual and cultural centres in Kozhikode. The temple’s date of origin is uncertain but was most likely built during the foundation of the city itself in the 12th century or before. The temple is surrounded by gigantic walls of ‘elephant belly’ (aana palla) type with a broad base and narrower neck at the top. One of the two tanks attached to the temple can be seen to the right.

Thalikkunu Shiva Temple: Thalikkunu Shiva Temple dedicated to Lord Shiva, is situated in Mankave, Kozhikode, Kerala, India. The most important is the Maha Shivaratri which is celebrated on the Krishna Paksha Chaturdashi of Hindu calendar month Maagha. As said Lord Shiva is the main Deity. Lord Ganapati and Ayyappa is worshipped inside the Ullambalam and Nagaraja are worshiped outside beside a big Banyan Tree.

Sree Kanteswara Temple: It is installed by the great spiritual leader Sree Narayana Guru. Sree Kanteshwara Temple is located in the southwest corner of the Kozhikode stadium at a distance of 1.5 km from the railway station. Devoted to Lord Shiva, this temple also known as Puthiyambalam has a Shiva Lingam in the Dhakshinamoorthi Sankalpa as the main deity. Besides these, many other offerings and rituals like Shodashabhishekam, Udayasthamana Pooja etc. Lord Subramanian, Sree Ganapathi, Sree Dharma Shastha, Maha Vishnu, Bhagavathi and Navagraha are the upadevathas (other deities) here. It is believed that centuries earlier a temple named Nalliswara Kshetram