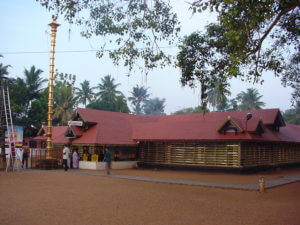 Kottarakkara Ganapathy Temple is located in Kollam district of Kerala. Kottarakkara Ganapathy is often referred to as ‘Vigneshwaran’ which means the one who removes all obstacles. The outlook of  Sri Ganesha is described as yellow-skinned, short with a big round belly, elephant-headed with one trunk, four arms, large ears and bright shining eyes. Apart from the presiding deity, Lord Shiva, Goddess Parvathi, Lord Murugan, Lord Ayyappa, and Lord Nagaraja are also worshipped here.

Kottaram means Palace and Kara means Land. The last queen of the Elayidathu Swaroopam voluntarily surrendered to king Marthanda Varma of Travancore in the 18th century. Kottarakara is the place where the classical art form of Kathakali was conceived. It is a famous pilgrim centre for the Hindus as the seat of the famous Ganapathy Temple.

Dhara, Chathussatham for Mahadev, Archana for Goddess Parvathy, Lemon garland for Subramanya, Unniyappam for Ganapathy and 41 days Mandalam Chirappu is also very important. Unni Appam is the offering that is specially prepared to offer to the deity of Kottarakkara Sree Maha Ganapathy Temple.

How to reach Kottarakkara Ganapathy Temple?

By Road: Buses and Taxis can be boarded from Kottarakkara, Kollam, Trivandrum and Kottayam that takes the passengers directly to the Kottarakkara Sree Maha Ganapathy Temple.

By Air: The Nearest Airport is Trivandrum Airport that is 70 Km from the temple. Kochi Airport is at a distance of 191 Km.

Where to stay near Kottarakkara Ganapathy Temple?

There are many hotels as well as guest rooms near the hotel. The rooms are well equipped with all the basic amenities.

Kottarakkara Unniyappam (small appam) is as famous as Ambalapuzha Palpayasam. If you start eating one, you feel like having more. Cooked in special taste the unniyappam comes with sprinkled sugar on it. The grace of Lord Ganapathi makes unniyappam as double sweet to the believers. It is said that unniyappam was the first offering given to the Ganapati temple which was installed by Peruthachan. Besides, there are many restaurants nearby that offer amazing food of Kerala cuisine.

Mannady Temple: Mannadi is a small village situated in Kollam (district of Kerala). It is believed that the Kali Ma of this temple is very powerful and if worshipped with devotion all the wishes will come true. The Kerala Institute of Folklore and Folk Arts functions here. Madanthampuran and Yakshiamma were positioned as Safe Guard to Devi. The ancestors who had brought Devi to the temple were worshipped in the Nomenclatures of Manthramoorthy and Yogeeshwaran after their Death. Poojas were not been performed systematically. Hence, the youth adopted the management of the temple from the Pallithanam Family. They appointed a Priest and thus Poojas performed regularly.

Pattazhy Devi Temple: Pattazhi is a small village in the eastern part of Kollam District in Kerala. It is located just 10 kilometres away from Kottarackara and just 9 kilometres from Pathanapuram. The temple is an ancient temple and the legend. The land of Pattazhy consists of two panchayat areas and was given as a gift to Goddess Pattazhy Devi by the King of Travancore. Pattazhy has a place in the Guinness Book of World Records for growing the longest bamboo. The temple has been taken care of by nine families once. Then a man called “kambithan” came there. He was very powerful and had many divine powers too. He took care of the administration of the temple. There is a Shiva Temple which seems to be older than this Devi temple which is located near to this temple.