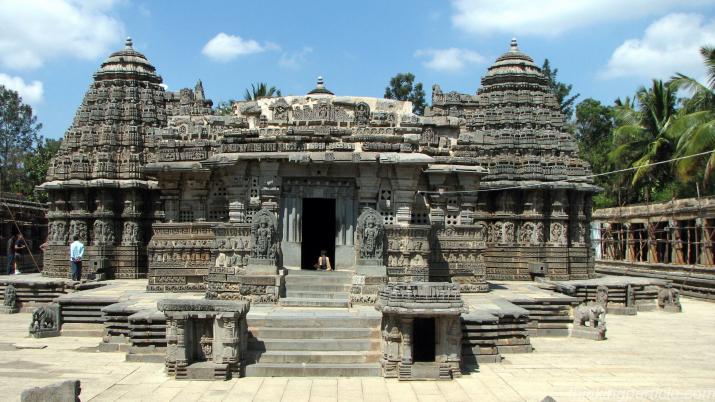 Keshava Temple Somanathapura is one of the most famous shrines of Karnataka, situated at the Mysore district. The holy Cauvery River passes by the small village of Somanathapura, while the lush greenery encircling the temple let prayers come deep from your heart at the serene environment.

As you enter the porch of the Keshava Temple Somanathapura, you are no more in modern India. The perfect carvings and well-defined sculptures take you back in time when South Indian temple architecture was at its peak. The Keshava Temple is one of the most well-preserved temples of the Hoysala reign.

The glorious history of Karnataka is treasured at the Keshava Temple.

Significance of the Keshava Temple Somanathapura

The Keshava Temple of Somanathapura is a must-visit for historians and tourists who wish to get back to the golden time of Indian architecture.

As the Keshava Temple is just a sightseeing spot and is not functional at present, hence there is no arrangement of food or prasada at the temple.

Though there is no particular dress code to enter the Keshava Temple complex, there are restrictions related to footwear. Tourists need to keep their footwear outside the temple complex.

Festivals celebrated at the Keshava Temple

Keshava Temple bears the history of the 12th century Hoysala kingdom and it is no more used for worship. Hence at present there are no festivals that take place at this temple complex.

The Keshava Temple is a major sightseeing place at Karnataka. Worship of the deities does not take place here and hence visitors have no scope to witness any rituals and pooja at this temple complex.

By Air: The Bangalore international airport is the nearest airport to Somanathapura.

By Road: By road the Keshava temple is almost 2 hrs from Bangalore, lying at 180 km from the capital city. You can avail taxis to get to the site. The Maddur- Malavalli- Bannur- Somnathapura road is the best way to reach the Keshava Temple. Tourists travelling by road are advised to take the Malavalli road from Maddur, then a right turn from the Malavalli City Junction that goes towards Bannur. From the main junction at Bannur, a left turn takes the visitors to the temple.

Tourists can also opt for the Bangalore- Mysore road and take a diversion Srirangapatana bridge. The Keshava Temple is approximately 50 km from the district headquarters of Mysore. There are a number of private buses that ply between Mysore and Somnathapura, but it is advisable to visit the place via private cars as you have many sites to visit around the Keshava Temple.

Hotels in Somanathapura: Where to stay

Accommodation facilities are not available at Somanathapura. Tourists are suggested to stay at Bangalore or Mysore. United 21, Mysore, Regaalis Mysore, Hotel Dasaprakash, Mannars Residency, the Quorum, Royal Orchid Metropole are some of popular hotels located near the Keshava Temple. From budget to premium rooms, all types of rooms are available here.

There are no such restaurants near the Keshava temple. Tourists can have coffee, tea and cold drinks at a nearby canteen. Restaurants are available near T Narsipura. If you are travelling by road, you will also find some eateries on the Mysore road, serving authentic South Indian cuisines.

The district of Mysore is known for its quaint villages, each one treasuring a marvellous temple. Some of the nearby temples that you can check out on the way to the Keshava temple are:

Hence visit Keshava temple this vacation to witness how stone gained life in the expert hands of Indian artisans during the golden days of Indian architecture.