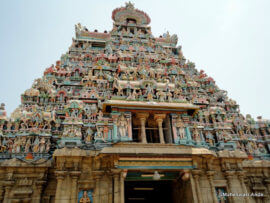 The Jambukeswarar temple in Tiruchirapalli of Tamil Nadu is one of the  Pancha Bhoota Stalas (the five Shiva temples). The presiding deity is the Appu Lingam – the water element. It is one of the 275 Paadal Petra Sthalams, where all the Nayanars (Saivite Saints) have sung glories of the deity.

Another famous temple in the Pancha Bhoota Stalas is the Arunachalam Temple located in Tiruvannamalai.

What is the history of Jambukeswarar Temple?

The history of Jambukeswarar temple is that it was built by Kocengannan (Kochenga Chola), one of the Early Cholas, around 1,800 years ago. It is in the Srirangam Island, which has the famous Ranganathaswamy temple. Hundreds of devotees gather here every year to watch the Lord and get his blessings.

What is the legend of Jambukeswarar temple?

Devotees believe that once, Devi Parvati made fun of Lord Shiva’s penance for the improvement and welfare of the world. So, Shiva asked her to go to the earth from Kailash (Shiva’s abode) to perform her penance.

Parvati in the form of Akilandeswari as per Shiva‘s wish found Jambu forest (Thiruvanaikoil) to conduct her penance. Hence, she made a lingam out of water of river Cauvery under the Venn Naaval tree (the Venn Naaval tree on top of the saint Jambu) and commenced her worship. Threfore, the lingam is known as Appu Lingam (Water Lingam). Siva at last gave darshan to Akilandeswari and taught her Siva Gnana. Further, Akilandeswari took Upadesa (lessons) facing East from Shiva, who stood facing west.

Also, Malyavan and Pushpadanta were two Shiva Ganas or disciples. They always were on conflict over something or other and once Malyavan cursed Pushpadanta to become an elephant on Earth. The latter cursed the other to become a spider. The elephant and the spider came to Jambukeswaram and continued their Siva worship.

The elephant collected water from river Cauvery and conducted ablution to the lingam under the Jambu tree every day. Shiva, in the form of Jambukeswara, moved by the deep devotion of the two, relieved them from the curse. As an elephant worshipped Shiva here, this place was famous as Thiru Aanai Kaa (thiru means holy, aanai is elephant, kaa (kaadu) means forest). Then, later the name ‘Thiruaanaikaa’ becomes ‘Thiruvanaikaval’ and ‘Thiruvanaikoil’.

For committing the sin killing the elephant, the spider was born as the King Kochengot Chola meaning red-eyed king and built 70 temples and this temple is the one among them.

What is the significance of Jambukeswarar Temple?

The significance of Jambukeswarar temple is that the main deity is Jambukeswara, representing the element water. Also, Jambukeswara is depicted sitting under a jambu tree. It grows over a small stream that engulfs the deity during the rainy season. The sanctum of Jambukeswarar is always abundant in water.

The massive outer wall covering the fifth precinct is famous as the Vibudi Prakara. It stretches over a mile, and is two feet thick and over 25 feet high. Legend maintains that Shiva built the wall with the laborers. The fourth precinct contains a hall with 796 pillars.

The temple is also the abode of goddess Akilandeswari, one of the forms of the goddess Parvati.

Also, the temples idols are opposite to each other. Such temples are Upadesa Sthalams. As the Devi was a student and Jambukeswara a Guru (teacher), hence Thiru Kalyanam (marriage) does not take place in this temple for Shiva and Parvathi, unlike the other Shiva temples.

What are the timings of Jambukeswarar temple?

The timings of poojas and rituals at Jambukeswarar temple are:

What are the festivals celebrated at Jambukeswarar Temple?

Some of the festivals celebrated at jambukeswarar temple are:

How to reach Jambukeswarar Temple?

Here’s how to reach Jambukeswarar Temple:

Where to stay near Jambukeswarar Temple?

Some places to stay near Jambukeswarar temple are:

What are some temples near Jambukeswarar Temple?

Some of the temples nearby Jambukeswarar temple are: