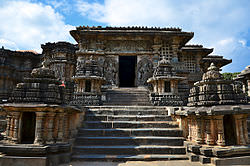 Hoysaleswara Temple of Halebeedu is another masterpiece of Indian temple architecture. Located at the banks of an enchanting lake, this temple is encircled with manicured gardens, while the atmosphere is serene. The Hoysaleswara temple is dedicated to Lord Shiva and exhibits Hoysala architectural style.

History and Legend of Hoysaleswara Temple

The Hoysaleswara temple of Halebeedu narrates the glorious history of ancient India and hence is a must-visit.

Significance of the Hoysaleswara Temple

Hoysaleswara temple is known for its exquisite architecture and is one of the important temples of South India.

Hoysaleswara Temple is open to tourists for sightseeing and the deities are not worshiped here. Hence there is no ritual of serving ‘Prasada.’

Hoysaleswara Temple is visited by tourists for its spectacular architecture and festivals do not take place at its premises.

Poojas and Rituals at Hoysaleswara Temple

The deities of Hoysaleswara temple are not worshipped at present and hence no pooja or rituals take place here.

The Hoysaleswara temple is easily accessible from all parts of the country.

By Road: There are regular buses and taxis available that can directly take the tourists to the temple. There are regular buses by KSRTC that ply between the major cities and Halebeedu. Private buses from the Majestic bus stand of Bangalore ply directly to Hoysaleswara temple. The temple is located at 16 km from Belur, 31 km from Hassan and 149 km from Mysore. Tour the city of Halebeedu in auto rickshaws to get the local vibe.

Hotels in Halebeedu: Where to stay

Halebeedu is a hub of the rich heritage of Karnataka and hence several hotels have developed near the temple. These hotels not only provide decent accommodation to the tourists but also offer premium services, depending on the needs of the visitors. You can avail of both budget and deluxe accommodation at Halebeedu. Hotel Mayura Shantala, Sumukha Residency, Vishnu Regency are approximately 15 km from the temple, while the Hoysala Village Resort, Gateway Hotel, Stay Simple Riverdale, La Flora Pavanputra Resort and Spa are almost 24 km from the site.

Visitors can relish authentic South Indian food at the nearby hotels. There is a government hotel opposite the temple, just at 100 meters from the bus stand, where you can get both South Indian and North Indian food. This eats out is open from morning till 10 pm and is both cost-effective and hygienic. Customers can choose to eat at the patio or at the garden. Shankar hotel is another popular food joint at Halebeedu, which is open from 7 am to 9.30 pm and serves South Indian food. Tourists can also relish non-vegetarian dishes like chicken and fish curry at a nearby restaurant, located beside the Canara Bank.

The Halebeedu temple complex consists of some of the most famous temples of Karnataka.

Hence be at Hoysaleswara temple to feel proud of the rich heritage of India. Not only the temple is beautiful with its fine sculptures, these perfect carvings also take you back in the golden days, narrating the incidents from the golden times.