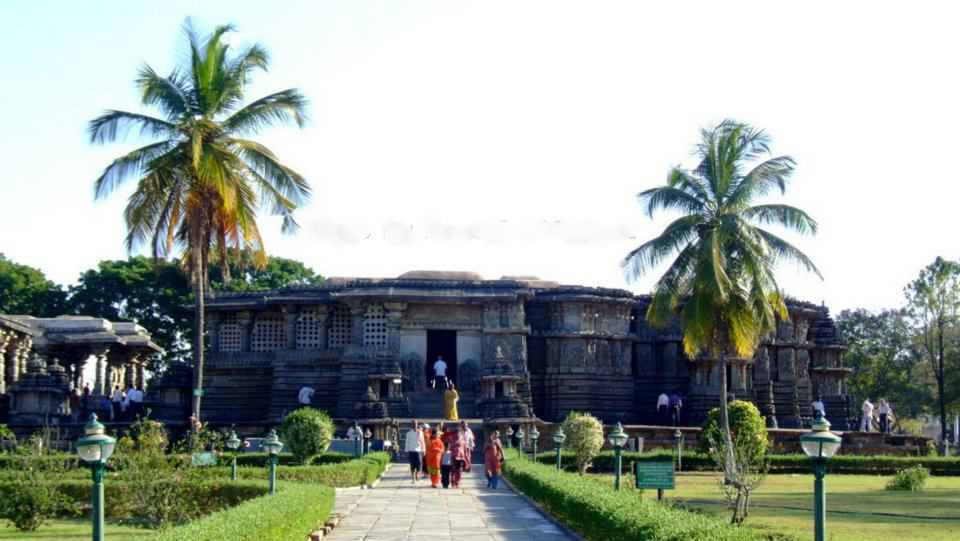 Halebidu is another landmark in the temple architectural history of Karnataka. Located at the Hassan District of the state, the name of the city means the ‘Old City.’ This city was the capital of the Hoysala Empire in the 12th century and hence is a treasure of architectural marvels. The most important shrines of the city are the Hoysaleswara temple and the Kedareswara Temple; both these temples represent the Hoysala style of architecture.

Located at the banks of a lake, the Halebidu Temple complex is beautiful and holy with its serene atmosphere and lush greenery all around. The temple complex is maintained perfectly and hence is neat and clean even in the rainy season. The Halebidu Temples are safeguarded by the Archaeological Survey of India. The Hoysaleswara temple is a UNESCO world heritage site while the Kedareswara Temple has been proposed to be recognized as a UNESCO world heritage site.

History and Legend of Halebidu

The Halebidu temples are witness to the glorious past of ancient India.

Significance of the Halebidu Temple

The Hoysaleswara Temple and the Kedareswara Temple are popular tourist destinations of Halebidu. These temples are known for the intricate carvings which portray the golden age of Hoysala rule. Every sculpture is different from the other; the granular details of the postures are amazing.

The Halebidu temple complex is now open just for sightseeing and regular Hindu worship and rituals do not take place. Hence the custom of serving food is not present.

There is no particular dress code at the Halebidu temple complex, but it is advised that most of the body part is covered. Cotton clothes are preferred due to the hot weather. Shoes have to be kept out before entering the temple complex.

Festivals celebrated at the Temple

No specific festivals are celebrated at the Halebidu temple complex.

The Halebidu temple complex is a heritage site and poojas and rituals are not performed here.

By Air: The nearest airport to the Halebidu Temple complex is the Mangalore airport. This airport lies at 185 km from the city of Halebidu. There are direct flights from Kozhikode, Mumbai and Bangalore to Mangalore. The international airport of Bangalore is another important airport near Halebidu. There are taxis and buses available outside the airport, which take the tourists directly to Halebidu temple complex.

By Train: The nearest railway station to Halebidu is the Hassan railway station, lying at 32 km from the city. You can avail direct trains from Birur, Shimoga, Mysore, Bangalore, Mangalore, Dharwad, Karwar and Hubli to Hassan. There are auto rickshaws, taxis and buses available from the railway station which take you to the Halebidu temple complex.

By Road: Halebidu is easily accessible by the road. It is directly connected with the capital city of the state, Bangalore, major cities of Mysore and Mangalore. Tourists can avail direct buses to Hassan district. Halebidu is located at 149 km from Mysore, 211 km from Bangalore, 34 km from Chikmagalur and 31 km from Hassan. Belur, another important tourist destination of Karnataka is near to Halebidu (just 15 km) and hence you can cover the distance in private taxis.

Regular buses ply from the important cities of Karnataka to Halebidu. There is a bus stoppage at the Halebidu temple complex. Taxis and auto rickshaws are the other local transport facilities available here.

Hotels: Where to stay

There are decent staying facilities available near the Halebidu temples. The Sumukha residency and Vishnu Regency are located at 15.4 km from the temple complex. Hoysala Village Resort, Stay Simple Riverdale, Hotel Mayura International are to name a few. These hotels provide both budget and premium accommodation to the tourists, along with basic amenities and food facilities.

Tourists can enjoy Indian, continental and Chinese cuisines at Halebidu. Some of the well known eat outs near the temple complex are the Club House at Planters Court, Hotel Gokul Veg, The Meridian and the Shantala.

Besides the Halebidu Temple complex, there are other temples which are worth a visit.

Hence be at the Halebidu temple complex to witness the meticulous artwork that was created almost 900 years back. If tired, just rest your feet over the green grass, basking in the celestial atmosphere.