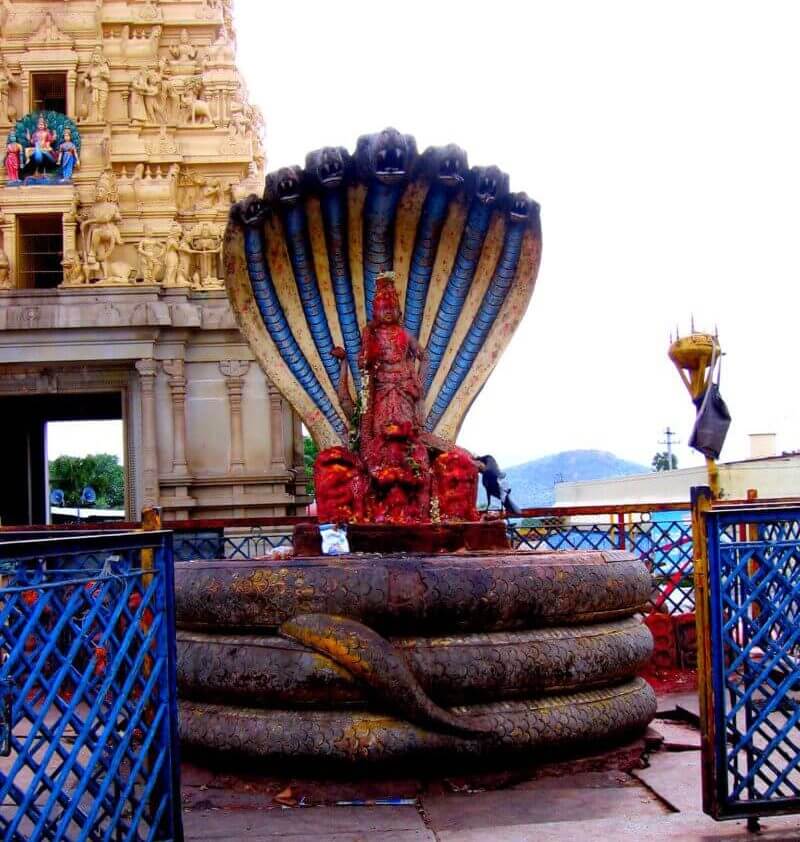 Ghati Subramanya Temple is one of the most famous temples in Karnataka. People gather in a massive number to visit this temple every year on a regular basis and offer their prayers to Lord Subramanya, the presiding deity. Sri Subramanya is specifically well-liked in the midst of the Tamilian population of Karnataka.

The temple is positioned near Doddaballapur in the rural district of Bangalore and is located at a distance of about 60km from Bangalore city. The temple, therefore, serves as the most appropriate doorway for the weekend from the busy day to day schedule.

The architectural style of the temple is the central part of the attraction for all the spectators as well as the visitors.  The architectural style of the temple dates back to the Dravidian style. The temple is also enclosing a mystery with regards to the inception of the idols, however, Sri Subramanya Temple is believed to be one among the ancient temples.

The devotees acquire a darshan of Lord Lakshmi Narasimha by adopting the method of viewing the idol on a tactically placed mirror and the temple is believed to be very singular for those who have the propensity to seek the Lord to bless them with a child.

Ghati Subramanya Temple is ancient in its origin and dates back to the Dravidian period and is also constructed in the Dravidian tradition. Apart from the Subramanya temple, other temples of the era are also built in similar styles such as the temples around Mysore, Bangalore as well as the Nanjudeshwara temple in Nanjangud and the famous Chamundeswari temple on the top of the Chamundi Hills.  The supervising deities of the temple are Lord Subramanya and Lord Lakshmi Narasimha and this is the primary reason that every day innumerable devotees visit the Ghati Subramanya Temple.

Although the only place of attraction and interest in Ghati is the temple apparently but it is also true that there is an abundance of attention-grabbing sources around 20-30km of the temple and these places of attraction can keep the visitors occupied throughout.

As per the legend and also the mythology associated with this temple, the idols of Lord Subramanya and Lord Lakshmi Narasimha have originated from the earth itself and are not sculpted by human beings. The temple is also believed to be a significant and holy place in South India for the worship of Snake.

The Ghati Subramanya has a recorded history of more than 600 years and it was first established by the Ghorpade rulers of Sandur who then were believed to have ruled parts of Bellary. Ghati Subramanya is also considered to be one of the best pilgrim centers in Bangalore.

The devotees of the temple have their faith in an age-old tradition which seems to persist to date. The most popular tradition, as well as the belief of the visitors and devotees, is that childless couples are blessed with children after offering prayers and making vows to the Lord. An associated ritual of the temple also includes the installation of idols of snakes or serpents and thousands of such idols are observed near the temple.

The idol of Lord Karthikeya with a seven-headed serpent specifically Cobra is prepared from a single stone. The serpent faces eastwards while the idol of the Lord faces westwards.  In order to make certain the visibility of both the idols to visitors, a gigantic mirror has been placed in the back of the idol in the study Sanctorum.

Significance of the Ghati Subramanya Temple

Lord Sri Subramanya is regarded as a popular deity in the Hindu religion and is worshipped by people all over the country specifically in parts of South India.  Lord Subramanya is considered to be the son of Lord Shiva and it is also believed that Subramanya was the commander-in-chief of the army of Gods and he was the one who killed the demon Tharakasura. Lord Subramanya is also popularly known as Shanmukha, Karthikeya, Saravanabhava, Skanda, etc.

Guha is also one of the many names of Lord Subramanya because he is also regarded as the Lord who resides in caves and caves and mountains are the abode of Lord Subramanya.  There are innumerable temples in India dedicated to Lord Subramanya and some of them are pilgrim centers renowned as Subramanyam Kshetras. A temple of such significance is located at Ghati in Karnataka state about 60k from Bangalore.

According to Sthala Purana, Ghati is the place where Lord Subramanya executed sacrament in the disguise of a serpent inside the caves in the mountain ranges of the area before slaying the demon Tharakasura. Lord Subramanya also summoned protection from Lord Lakshmi Narasimha for the serpentine clan from Garuda’s scare in Ghati. Garuda is the sacred mount of Lord Vishnu and is considered to be an enemy of the Serpentine tribe.

Ghati is a Sanskrit word which means a plot. A serpent’s hood bear a resemblance to a pot and Ghati is the place where Lord Subramanya lived in the form of Ghata Sarpa. As per the records, the temple at Ghati Subramanyam Kshethra consists of a history of more than 600 years and was first built by Ghorpade. The rare and self-originated idol of Lord Subramanya was unearthed by king Ghorpade with the help of local residents as per the instructions of Lord Subramanya himself.

Some of the important facts about the Subramanya temple are the following:

How to Reach: Road, Rail, Air

By  Rail: The nearest railway station to Ghati Subramanyam is Makali Durga which takes the route of Bangalore-Guntakal line.

By Air:  The nearest airport to Ghati Subramanyam is the Bangalore airport.

The Ghati Subramanya Temple offers free lunch to all the visitors and pilgrims who take part in its ‘Nithya Annadhana’ scheme like many temples in the South. Apart from this facility, there are also many restaurants nearby the temple where very fine delicacies are served.