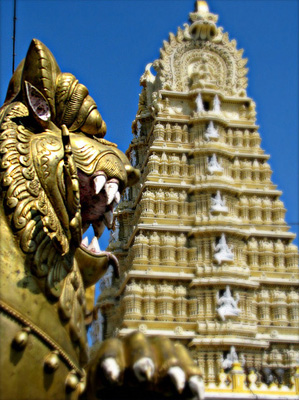 The Chamundeshwari Temple is considered one of the 18 Maha Shakti Peethas and is known by the name of Krouncha Pitham; Shakti Peethas refer to the sites on which the body parts of Goddess Sati fell when Lord Shiva was carrying her and wandering through different places in deep morose. It is believed that the hair of Goddess Sati fell at the site where the Chamundeshwari Temple has been constructed. It is named after the name of the place; the site was known as Krouncha Puri during the Puranic times. The deity is seated on a lion with a trident in her hand, which is pierced into the demon Mahisasura. The buffalo lies in the body of the asur.

History and Legend of Chamundeshwari Temple

The temple is the oldest temple in the hills of Mysore. It is not only a bearer of the rich cultural history of South India but also has several myths revolving around its foundation.

Significance of the Chamundeshwari Temple

Being one of the oldest shrines of Mysore, the Temple is visited by thousands of pilgrims every year. Chamundeshwari Temple holds a significant place in the religious facet of Karnataka.

A strict schedule is followed at the Temple for worship and offerings.

Festivals celebrated at the Chamundeshwari Temple

Temple is one of the important shrines of Mysore and hence are marked with major religious celebrations.

Poojas and Rituals at Chamundeshwari Temple

Hotels in Mysore: Where to stay

The Chamundeshwari Temple committee maintains a guest house for the devotees. This 20 room guest house comes with decent amenities. Mysore is an important city of Karnataka and hence tourists can find both deluxe and budget hotels easily near the Chamundeshwari Temple. Radisson Blu Plaza, The Viceroy Comforts, Ginger Mysore, United 21 Mysore, Pai Vista, and Royal Orchid Metropole are to name a few.

There are several vegetarian restaurants around the Chamundeshwari Temple. From hot dosas to piping hot coffee, you can get both authentic South Indian and other types of dishes out here. Visitors can also enjoy pizzas at the nearby food joints. Vinayaka Mylari, The Foodie Restaurant, Hotel RRR Restaurant, Little Woods and Corner House are some of the popular restaurants near the Chamundeshwari Temple.

Mysore is known for its beautiful palaces and sacred shrines. Some of the other temples worth visiting the city are:

The Chamundi Village located near the temple is also an attraction of the place due to its unique lifestyle and simplicity.