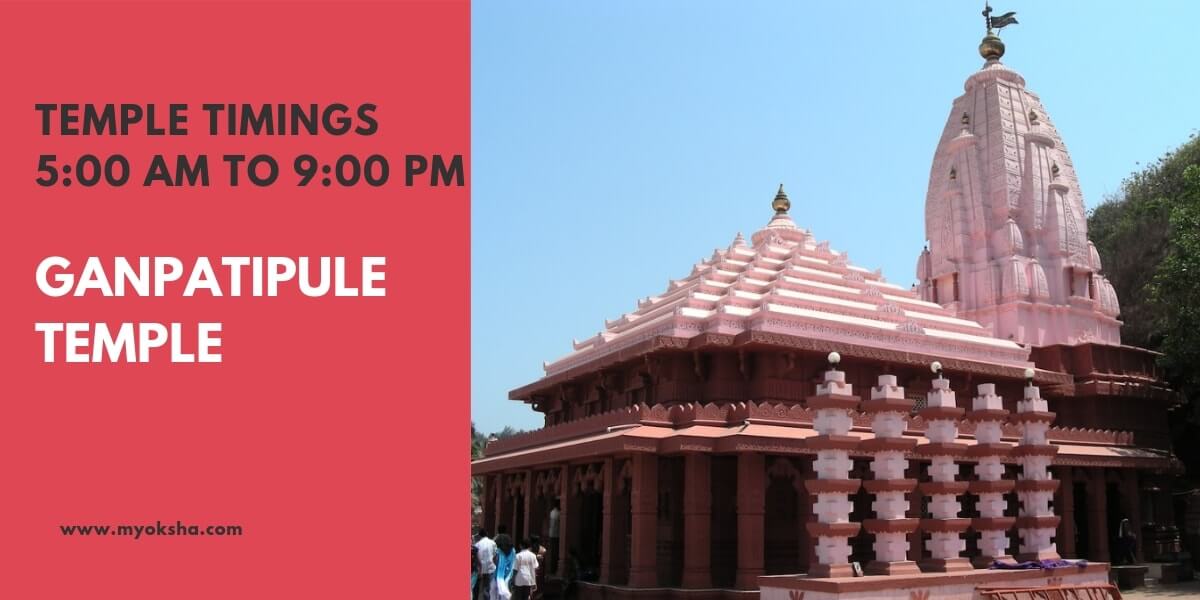 Ganpatipule Temple is located at a distance of 350 kms from Mumbai, in Ratnagiri district of the Kokan coast of Maharashtra. ‘Ganpatipule’ is the land of 400 years old “Swayambhoo” (a self-incarnated idol) Ganesha. Its origin can be imagined by its references in ancient literatures like Mudgal-puran etc, where it has been referred to as the “Paschim Dwar- Devata” or “Paschim Dwarpalak” (Western Sentinel God).

What is the history of Ganpatipule Temple?

Various myths are prevalent about the temples and deities. Some 500 years back, during the reigns of Moguls, there used to be ‘Kevada’ (flower tree) forest at the foot of the hill where presently the “Swayambhoo” Ganpati is situated. Here lived a Brahmin named Balbhatji Bhide.

Once he came across a major personal calamity, but being a determined person he decided to give up food and water till he is relieved from his problem. Hence he stayed in the Kevada forest for penance and worshiping his tutelary diety “Mangalmurti” Lord Ganesha.

During this period, Bhide had a vision in his dream in which Lord Ganesha told him that he has come to Aagargule (Ganesh Gule) in his “nirakar” (void) form to relieve all my devotees of their difficulties. Hence, you worship and propitiate here.

During the same period, one of the cows of Bhide was not giving milk, for which reason, the cowherd kept a close watch on her. He was astonished to see that the milk was flowing from cow’s udder on the place where the idol of the God is placed at present.

The cowherd narrated the incident to Bhide, on cleaning up the entire area Bhide found the idol of Ganesh which he had seen in his vision. Therefore, he built a shrine on a grass top there and started performing his first rituals.

Later, Secretary Annaji Datta, one of the eight trusted ministers of Shivaji Maharaj, erected a marvelous dome replacing the grass-top. The next construction was the auditorium built by Sardar Govindrap Bundele from Peshwa court.

After that the Kolhapur Sansthan Secretary Vasudeorao Barve, made a gold plated dome-summit. His Highness Nanasaheb Peshwa arranged for the continuous lamp-lit “Nandadeep” and Ramabai Peshwa created a permanent hard-stone construction for the pilgrims. Madhavrao Peshwa built the “Sabhamandap”.

What is the significance of Ganpatipule Temple?

Ganpatipule Temple is one of its kind and holds an important place in the Hindu culture as it is one of the ‘Astha-Ganapatis’ (eight Ganpatis).

Another most unique characteristic of this temple is that the abode of Ganesha  is ‘Swayambhoo’ (Self-incarnated). This very concept of being self-embodied is suitable only to the ‘Aadhya-Devatas’ (Initial deities). All these ‘Swayambhoo’ deities are the parts of this eternal nature. Hence, they do not need any further carving or sculpturing. They are nature in itself.

The mesmerizing glimpse of the fountain spurring from the naval of Lord Ganesha on a typical monsoon day, fills every devotee witnessing it with utmost divinity and purity.

The present form of the temple was built between 1998 and 2003. To give it an impression of being carved out of a single rock, construction has taken place with a special kind of stone called the Agra Red Stone.

The Ganpatipule temple is situated at the foot of a small hill along the seashore. Therefore, pilgrims visiting here believe in taking a “Pradakshina” around the hill instead of just the temple. The “Pradakshina” is usually done to show ones’ obeisance to the Lord and devotion towards Him.

At the front gate, to the north, is a huge main gate with two elephants with raised trunks, standing on both sides of the gate. There is also one large bronze “Mushak” (mouse) situated near the gate. The “Mushak” is the “Vahana” (carrier) of Sri Ganesh, typically found in all His temples, is very sacred to the Hindus.

It is believed that if anyone has a wish to get fulfilled by Lord Ganesha then he or she can whisper the wish into the ears of the Mushak and pray for its fulfillment.

What are the timings of Ganpatipule Temple?

The Darshan timings of Ganpatipule Temple are as follows:

What are the festivals celebrated at Ganpatipule Temple?

Various festivals and celebrations are carried out ardently throughout the year, those are:

Bhadrapad shuddha pratipada to panchami.
Aarati, Mantrapushpa and Keertan every night.
Mahaprasad on the auspicious day of Waman Dwadashi.

On this day, at early morning a pooja takes place at the ‘Samadhi’ (Holy Tomb) of Bhatji Bhilde and 2100 Boondi Ladus are distributed among the devotees. In the evening, the palanquin procession for ‘Simollanghan’ (Symbolic crossing of the out skirts) takes place.

The palanquin halts at the Shamee Tree on the Pradakshina path. The leaves of the Shamee tree are taken as a symbol of gold and are hence offered to Lord Ganesha during the pooja and like this the palanquin celebration comes to an end.

Palanquin Procession of the Lord

On every Sankanshti (i.e. 12 time a year), on Gudhipadwa, Dasara, Deepawali (First Day) Ganesh Chaturthee (Bhadrapad Suddha 4), Maghi Chaturthee (Magh shuddha 4) are the specific SEVENTEEN times, on which the Lord Ganesh is worshipped with this procession.

How to reach Ganpatipule Temple?

There are multiple ways to reach the Ganpatipule temple, those are as follows:

Konkan Railway station is around 65 kms away from the temple.

The nearest airport to the temple is Mumbai Airport which is around 375 kms away from the temple.

The MSRTC State Buses are also available for transportation from Ratnagiri Bus Station.

There are several modern accommodation available near Ganpatipule temple and also in the Ratnagiri city. Apart from this, the charitable endowments like Bhaktinivas also provide lodging at a very nominal tariff.

All kinds of food options are available in the Ratnagiri city. Although near the temple mostly vegetarian restaurants are found. But it is worth mentioning that the local people of this place are very generous and kind. It is for them only that such an old heritage of the Hindus looks so serene and blissful even now. It is highly recommended to drink clean water only.

Karhateshwar Temple: It is a Lord Shiva Temple and can be reached by taking a left road from the Jaigad Fort.

Shri Laxmi- Keshav Temple: It is located in the Kolisare village, the temple is surrounded by dense forest and holds a very ancient idol of Laxmi and Keshav. The 5 feet idol is sculpted on a reddish black Shaligram stone from the Gandaki river in Nepal and is an excellent example of the finest form of ancient art.

Shri Uma-Maheshwar Mandir- Hedvi: The pretty mandir of Shri Uma and Maheshwar was built at the end of the 18th century with the help of Ahilyabai Holkar’s Charity. The temple has the heritage of solemn peace.

Shri Walneshwar Mandir: It is 5 kms from Hedvi. This temple too has a history of 400 years, hence, is a point of tourist attraction.

Shrikshetra Parshuram: Lord Parshuram is the 6th incarnation of Lord Shri Vishnu. This temple has a significance of its own and has many myths and legends related to it. The sculptural beauty of the temple is a fine blend of western, Muslim and Hindu architecture.

Shri Swami Swaroopananda Shrine temple (Samadhi Mandir): Swami Swaroopananda was a great saint, poet and spiritual Guru. His full name was Ramachandra Vishnu Godbole. He was fortunate enough to see Lord Vishnu in person. The place where he gave away his elements of existence (accepted Samadhi), has been transformed into a huge, beautiful and extremely clean temple.

Shri Zari Vinayak Mandir: On the Ratnagiri-Pavas road runs a crystal clear brook through the mountains. at the upper side of the brook (Zari in Marathi) you can see a carved rock symbolizing Lord Ganesha, hence the name Zari Vinayak.

Ganeshgule (Agargule): This temple of Ganpati is a famous 400 years on the Pavas-Poorngad road, 4 km from the main road. There is a popular story realted to this temple which says that Lord Ganesha transferred Himself from Ganesgule to Ganpatipule, which also led to the creation of a Marathi saying- “ Gulyacha Ganapati Pulyala Gela” (The Ganesh of Gule went to Pule).

Dhoot papeshwar Temple: It is located just 5 km from the main market area of Rajapur. One can see a very beautiful Ganesh idol carved out of a black stone. The temple traditionally celebrates Mahashivratri from Magh vadhya 10 to Falgun suddha 1.

Hot Water Spring – Unhaale: On the Mumbai- Goa highway comes a village called Unhaale. It is well known for the sulfur smelling hot springs which serves for many medicinal benefits to its visitors, especially people with skin diseases. There is a small Shiva temple too.

Ganga- Teerth- Rajapur: Located on the Mumbai- Goa highway this spot has a similar significance as that of the previous one. It has 14 Kunds (Earthen tanks borderd with Jambha rocks with hot spring waters over flowing through it. The place is worshipped due to its mysterious and beneficial properties.

Shri Kankaditya Mandir: The Kankaditya temple is a beautiful architectural piece. The Lord’s statue is splendidly carved out of a black stone. The temple also has a special silver chariot fot the Lord. The Rath (chariot) Saptami festival is celebrated in this temple between Magh suddha 7 to Magh suddha 11.