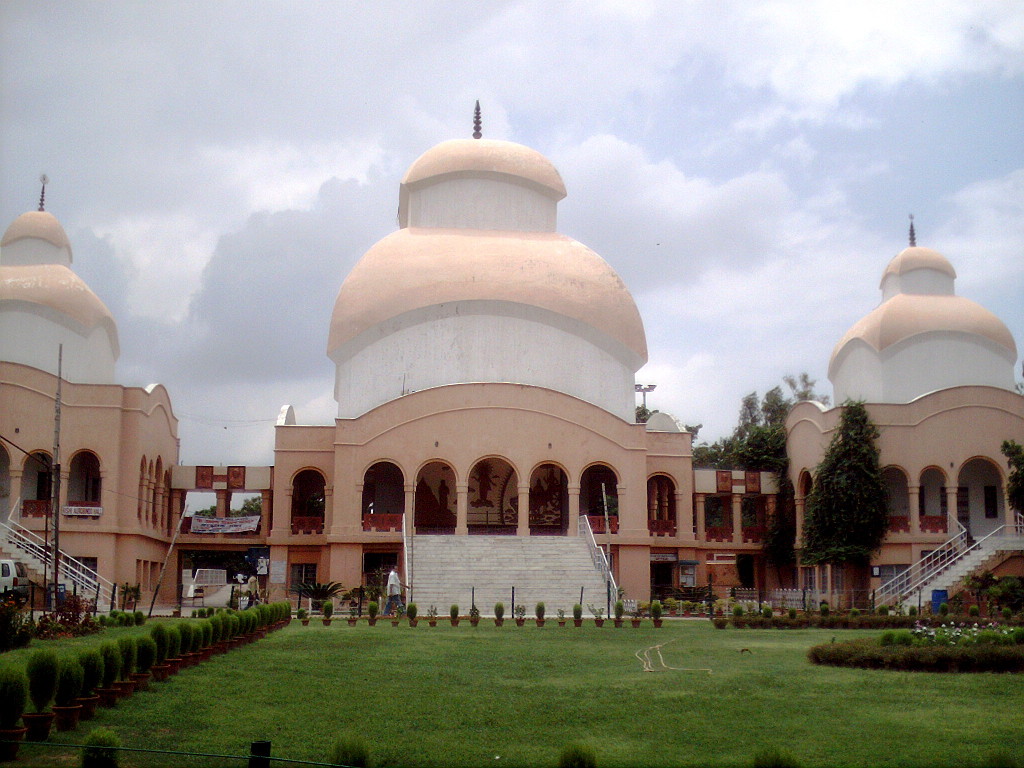 Chittaranjan Park Kali Mandir or CR Park Mandir is situated in the Bengali-dominated locality, CR park of south Delhi. It was founded in 1973, first as a small temple shrine for God Shiva. It was soon added with Goddess Kali and was later – by late 1980s – developed into what is today’s CR Park Mandir complex that hosts three shrines devoted to God Shiva, Goddess Kali, and Radha-Krishna.

A modern age temple, the architecture, during its expansion in the 1980s, took the form of Bengal terracotta temple art. It has grown into a cultural and traditional hub of Bengalis in Delhi. As Bengalis are synonymous to the grandeur celebrations of Durga pooja, the tradition of celebrating the pooja at this temple began in the late 1970s.

Situated on a small hill top, the mandir is known for its calm and serenity within the hustle – bustle of Delhi. It is surrounded by a vast garden which was declared as the ‘Best Kept Garden’ by Agri-Horticulture Society in 1999. The mandir complex also houses halls for cultural functions and discourses, and spaces crafted to accommodate festivals like Durga Puja, library, tirthashram, homeopathy, naturopathy yoga centres, children’s park, and a musical fountain.

The mandir maintains a Charitable ‘Balanada’ Dharmashala, viz., ‘Yatri Niwas’ – meaning a ‘Traveller’s Home’, and a canteen.  Any visitor to the city is welcome here, and would be accommodated for a maximum of seven days at a nominal price.

Due to the extreme variation of temperature in Delhi, the mandir timings change according to the season.

Everyday Arati timings are as follows:

Regardless of any particular ritual or pooja, this shrine is an emblem of great fidelity. Various customary Bengali poojas are offered to the Gods on special occasions.

Apart from the religious activities, CR Park Kali Mandir Society conducts and organizes many sports, cultural, developmental, and social activities throughout the year. They accept donations, whatever amount they may be, and use the amount for the service of God and mankind.

The mandir hosts a canteen, attached to the Dharmashala, which provides both veg & non-veg cuisines at nominal rates.

For the food savvies, Chittaranjan Park area houses a variety of traditional Bengali veg & non-veg cuisine (it is home to one of the city’s main markets for freshwater fish, an important part of Bengali Cuisine).

The ‘Yatri Niwas’, a charitable Dharmashala, has 30 double bedded rooms with attached bathrooms. Common hot water during winter, and room coolers during summer are provided by the Dharmashala. It accommodates any visitor of the city for a maximum of seven days at a nominal price with a two-month advance booking.

There are also several hotels and lodges in and around CR Park area which provide good accommodation options, with several markets nearby.

CR Park is an area in south Delhi which is very well connected with the rest of the city.

By Air: Indira Gandhi International Airport is the official airport of Delhi, and is around 15.2km from CR Park Kali Mandir.

By Rail: Delhi Junction Railway station is the major rail station of Delhi. It also has full-fledged metro rail system also operating within the city.

By Road: Several state government run buses and taxis operate round the city which transports to CR Park area.

Delhi is a city with rich history housing several monuments and temples with great cultural and political significance. Below are some of the places which are nearby CR Park.