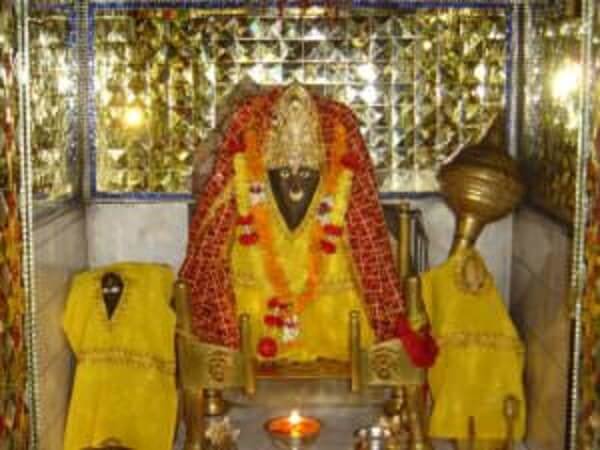 Baglamukhi Temple is a popular Hindu temple dedicated to the Mahavidya Goddess Bagalamukhi which is located in the city of Amleshwar to the south of Raipur town in the Indian state of Chhattisgarh. The temple was established by Param Pujaya Shri  Pitambara Pithadhishwar Yogiraj Youdhishthir Ji Maharaj. The temple was established on 16th May and the most sacred occasion to visit the temple during Navratri.

There is an immense significance of Goddess Bagalamukhi who is one among the ten Mahavidyas in Hinduism. She is believed to smash the misconceptions and delusions of her enemies and protects them from their enemies with her cudgel. Popularly known as Pitambara Maa in the northern part of India, Bagalamukhi is the wisdom goddess who symbolizes the potent force of primeval female.

The word Baglamukhi has been derived from “Bagala” meaning bride and “Mukhi” meaning faced. Her name symbolizes “the one with the face that has the power to capture or control”. She represents the hypnotic power of the Goddess.

Another meaning of her name is crane faced. Goddess Bagalamukhi has golden complexion and she is always seen in a yellow dress. The Goddess sits on a golden throne which lies in the midst of an ocean of nectar which is full of yellow lotuses and her head is adorned with a crescent moon. In sacred texts, the Goddess is described as the Dwi-Bhuja or the two handed and the Chaturbhuja or the Four handed.

According to the Dwi-Bhuja depiction, she is described as Soumya or mild where she holds the club in her right hand that is used by her to beat a demon and she pulls out his tongue with her left hand. With this image, she exhibits the power of Stambhana where she can stun or paralyze the enemy into silence. The devotees of Bagalamukhi worship her for this boon.

Bagalamukhi has another name Pitambara Devi as well as Brahmastra Roopini and according to the name she turns everything into its opposite like knowledge into ignorance, speech into silence, power into impotence and defeat into victory. The Goddess allows her devotees to master their weaknesses.

According to Hindu mythology once a huge storm erupted over the earth and this storm threatened to destroy the creation and all Gods assembled in Saurashtra region. Goddess Bagalamukhi at this point emerged from Haridra Sarovara appeased by the prayers of God and calmed down the mighty storm. From then onward, she was worshiped by her devotees as a form of Goddess Parvati.

Bagalamukhi Devi, also known as Pitambara Maa exists is a Shakti. Thus, Goddess Bagalamukhi represents potent female primeval force and is the one among ten forms of wisdom Goddesses.

Baglamukhi Temple is open on all days from 9 AM to 6 PM.

Navaratri that is a major festival dedicated to Goddess Durga and Shakti is one of the most celebrated temples in the Maa Pitambara temple. The baglamukhi temple hosts a major celebration before Dussehara. During the occasion, all forms of Shakti including Maa Baglamukhi are revered and a major ritual that runs a length of 9 days is celebrated here. Special arrangements are made for complete and enriching worshiping procedures for the deity and the methodologies adhere to the principles of the Vedas.

During this time, many yogis and Tantriks pray to the Goddess for special powers and people from all parts of the country visit the region to enjoy the exemplary decorations and celebrations in this part of the country. The celebrations involve many processions and there are elaborate preparations for Prasadam and religious Poojas during the time in Amleshwar.

The Baglamukhi temple also hosts a huge celebration on the occasion of Guru Purnima during navratri celebrations and also special poojas are arranged during Vasant Panchmi. These are perfect occasions to begin any religious proceedings or sadhanas.

Poojas and Rituals at Baglamukhi Temple

Like the Kamakhya Temple of Guwahati, the Bagalamukhi temples too are considered to be the centers of Tantricism. Here there are temples dedicated to ten Mahavidyas. These temples are powerful Bagulamukhi Siddha Peeth where the Goddess is worshiped by Yogis for special powers.

The major difference between Baglamukhi temple and any other temple is that if someone worships all Gods in these temples, they would be worshiping all 33 types of Gods and Goddesses together at one place.

Maa Baglamukhi is the eighth mahavidya and is invoked for the destruction of the enmity. She is the supreme divine force and was believed to be invoked by Lord Rama to destroy Ravana along with his descendants. All offerings that are made by the devotees to the deity in the temple are in compliance with the Vedic rules.

The holy chants that reverberate the temple premises during the rituals are performed with Divine grace. The Bagalamukhi Yantra also is of paramount significance for offering Pooja to the deity and for the successful completion of the rituals. It protects the devotees and also shields them from the negatives forces of enmity.

How to Reach Baglamukhi Temple: By Rail, Road, and Air

The Amleshwar Temple lies about 15 km from Raipur Airport and is at a distance of 25 km from Durg. It is accessible by train, approximately 5 km from Raipur Railway Station and also well connected through buses. The nearest airport, railway station, and bus stands are at Raipur. The temple can be reached by various modes as follows:

By Air: The major airport near Raipur is Swami Vivekanand International Airport located at Mana, 15 km south of Raipur. All major cities are connected to Raipur through flights.

By Rail: Raipur junction is the main railway station that is connected to the entire country through major trains.

By Road: Raipur is well connected to all other major cities of the country via regular buses and the major bus stations are at Raipur.

Where to Stay and Eat

Although Amleshwar is a small place and doesn’t have many boarding and lodging options, still Raipur being a close city can be a comfortable place to stay at while visiting. There are many 4 star and 5 star hotels in Raipur like Hotel Piccadilly, Hotal Mayura, Hotel Babylon International and Hotel Madhuban.

Chattisgarh has many ancient temples that are both a tourist attraction as well as a pilgrim for devotees. Here are some major temples of the region:

Raipur is a place with immense natural beauty, lush green spots, flora and fauna and has many places to visit and for the purpose of sightseeing. Thus, whenever one happens to visit the temple they should also take out some time to explore the nearby tourist spots that extremely popular among the locals as well as among the tourists. Here are some other major attractions of Raipur:

Therefore, do visit Raipur and the nearby Maa Pitambara (Bagalamukhi) Temple at Amleshwar whenever you happen to find time with the family and enjoy the religious bliss of this spot while devoting your time to the presiding Goddess here who is the provider of special powers and wisdom to all her devotees. The revered deity is one of the most sacred and sought out among the Hindus and thus, they get the best spiritual outcomes by praying here.