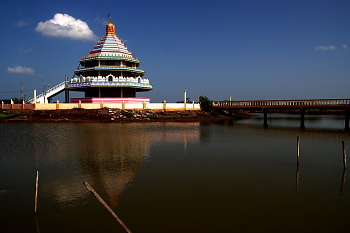 Antarvedi Lakshmi Narasimha Temple is popularly known as the Kashi of the South or the “Dakshina Kashi”. This place is a significant pilgrim center in the East Godavari district of Andhra Pradesh. It is in the most interior part of the East Coast. Antarvedi is a Sangam point of a tributary of Godavari River and the sea- the Sagara Sangamam. It is said that the river was brought in by the famous Maharishi Vashishth who is one of the seven great sages according to the Hindu Mythology.

Antarvedi is actually a small village near the Vashisht River. It is very close to Narsapur. The place draws people from the world over throughout the year owing to its unique rarity: the merging of the mighty Bay of Bengal and Vashishtha River, which is a tributary of the River Godavari. The place of confluence of the mighty ocean and the river is called the “Sapta Sagara Sangam Pradesam”. It is also known as the “Anna Chelli Gattu”, by the locals. The water in this area is surprisingly sweet, cool and pleasant unlike the salty seawater one would assume it to be and many devotees drink it in the form of prasad. There are seven sacred bathing spots in India and this place is one of them. According to mythology, the Tretha Yugam episode of Ksheera Sagara Mathanam took place here.

According to the legend, Lord Brahma, who is also known as the creator, wished to get freedom from sins he had committed against Lord Shiva. For this very reason, he had performed a “Rudrayaga” and prepared the place like a stage or “Vedik”, hence the name “ANTARVEDI”. Lord Brahma installed an idol of Lord Neela Kantheswara there. Before this, the Sage Vashishtha had created a branch of River Godavari here and established an ashram on it.

Later, Raktavilochana, the son of Hiranyaksha, did penance for over ten thousand years on the banks of Vasishta river, to please Lord Shiva. The Lord was pleased with Raktavilochana’s penance and blessed him with one wish. Raktavilochana had a rather uncommon desire – he asked that the number of sand particles drenched by the blood drops falling from his body on to the ground at war, would produce equal number of Rakshasas, as strong and vigorous as himself, and they would assist him at war and become one with him after killing all the enemies. His desire was fulfilled by the Lord.

Raktavilochana used his power to disrupt the Yagnas of Sages and harassed Brahmans. Sage Vishwamitra took this as an opportunity to avenge Sage Vasishta and provoked Raktavilochana to kill Vasishta’s hundred sons. Sage Vasishta, who was at Brahmaloka when his sons were murdered, returned to his ashram and prayed for Lord Narasimha’s grace.

Lord Narsimha, answered the Sage’s prayers and charioted along with Goddess Lakshmi on his Garuda Vahana. Vasishta prayed to the Lord to descend at his ashram and kill the demon.

War broke between the Lord and Raktavilochana and he shot all types of weapons at the Lord which were countered by only one weapon the ‘Sudarsana Chakra’. The blood drops that fell on the ground from the wounded Rakshasa’s body created more Rakshasas. To counter that, the Lord created “Maya Sakthi” managed to stop the fall of blood drops to the ground and released the blood as the reddish river called the “Raktakulya”. Lord killed Raktavilochana and destroyed the demons as well. It is said that Maya Sakti rode a horse, therefore it is known as ‘Aswarudhamba’ or ‘Gurralakka’. Chakrateertham is the place where the Lord washed his chakrayudha after he had destroyed all the demons with it. Once Lord Narsimha destroyed the troubling demon, Sage Vasishta expressed his desire to establish his Holiness at his ashram. The Lord was pleased with this request and  agreed to fulfill his desire and the temple was erected in the presence of all the Gods and angels. It is believed that visiting Antarvedi is the easiest way for devotees to achieve Mukti.

There are five important spots at Antarvedi Temple

In Kalyuga, the temple was rediscovered by a cow-herd who used to graze his cows in that area. He saw that one of his cows would shed her milk on a hill. On doing a survey of the hill and digging the area, the villagers found a sculpture of Lord Narsimha. The villagers built a temple around the sculpture and began worshipping it. The cow-herd who discovered the sculpture was called Kesavadas and the village was later named after him as ‘Kesavadasupalem’.

How to reach Antarvedi: Road, Rail, and Air

By Air: Antarvedi, being a small village in Andhra Pradesh, is not well connected by Air. Vijaywada and Rajahmundry are the nearby Airports to the temple. From there, one will have to take a bus till Narsapur.

By Rail: The nearest railway stations are Kakinada, Rajahmundry, and Narsapur. Antarvedi is 130 Kms from Kakinada and 100 kms from Rajahmundry. From the station one will have to board a public transport such as a cab or a bus. There are boats available to reach Antarvedi from Narasapur which is at a distance of 10 Kms.

By Road: There are a number of buses available from Kakinada and Rajahmundry.

From Hyderabad – One can take a bus from Hydrabad to Razole, whereon they can go to Malkipuram and thereto Antarvedi.

To visit the island temple, the tourists and pilgrims can hire ferries or boats. Tourists can see both the attractions – the temple as well as the sangam point of the river and the ocean. The ferry charges are usually nominal and depend on the number of people travelling on the boat. The charges can be anything between Rs. 50 to Rs. 350.

Hotels in Antarvedi: Where to stay

Near the temple, accommodation is available for the devotees at the TTD Choultry, Antarvedi. Per night rates of the rooms are nominal (Rs 200/- and 600/- for Non A/c and A/c Rooms respectively). Devotees can contact the Choultry for accommodation and bookings on this number: (08862)259313.

Every day, the Anna Danam program is organized in the temple premises and the devotees can avail this free food service. Few other small restaurants are located around the temple where local and coastal food is available.

Sri Bhimeswara Swamy Temple, Draksharamam – This temple in Andhra Pradesh is known as the abode of Lord Bhimeswara Swamy and his Goddess Manikyamba. The Temple is located at Draksharamam, East Godavari District of India. The preceding deity at the temple is in the form of a “Linga”, 2.6 mts tall and made of one large Crystal (known as the “Spatika Linga”). Another popular name of the temple is Dakshina Kasi Kshetram. The literal translation of Draksharamam is ‘Abode of Daksha Prajapathi’, the father of Sati and the father in law of Lord Shiva. Sati was the spiritual wife of Lord Shiva. The Draksharama temple is one the Five Powerful Temples of Lord Shiva which are known as “Pancharamas” in Andhra Pradesh. It is located at a distance of 90 km or 2.5 hours from Antravedi.