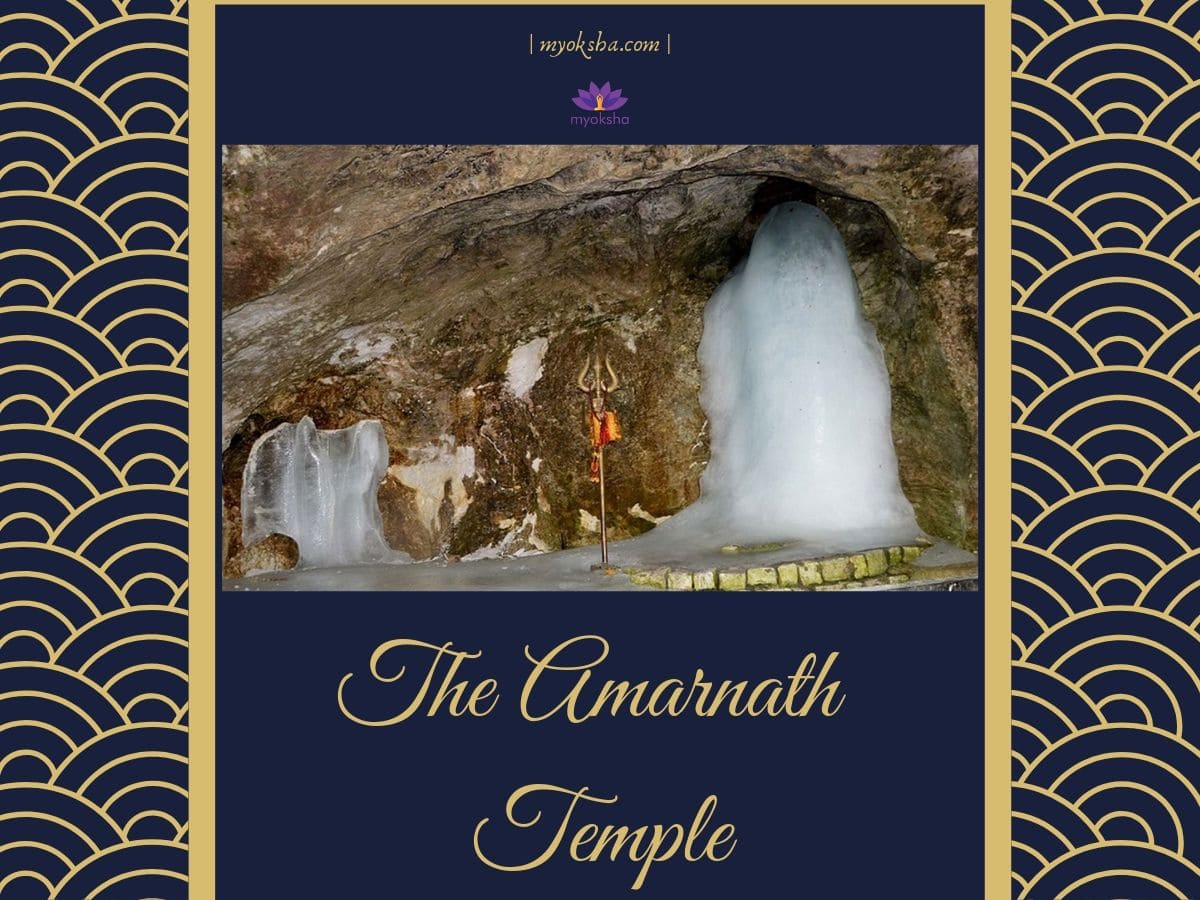 Amarnath Temple Cave is located at an altitude of 3888 meters (12760 feet) in the Himalayan mountain range known as the Chandanwari Hills. The shrine receives more than 4 lakh pilgrims in a 45-day visiting period during the month of Shravan and the Shravani Mela.

For Amarnath Yatra, the cave itself is surrounded by snowy peaks on all sides. The total height of the cave is 130 feet. A snowy stalagmite forms the shape of the Shiva Linga which is worshipped with great reverence. Besides the main Linga, three other formations representing smaller Lingas are worshiped as Lord Ganesha and Goddess Parvati and Bhairava.

⭐ What is the background of the Amarnath Temple Cave?

The Amarnath Temple Cave is believed to have been in existence since the age of the Gods and Goddesses. The cave has been mentioned in the Bringesh Samhita and the Nilamata Purana. A 6th century Sanskrit work depicting the life of Kashmiris also mentions a holy cave where Lord Shiva is worshipped as an ice Linga. The Amarnath Mahatmaya provides extensive details of the pilgrimage to the Amarnath shrine. It also enlists all the holy sites en route and their significance. The Amarnath Mahatmaya is believed to explain the importance of Amarnath in details and takes its facts from the ancient Adi-Purana.

⭐ What is the legend of the Amarnath Temple Cave?

The legend associated with the cave is fascinating and intriguing. According to scriptures, the cave is believed to have been chosen by Lord Shiva himself for enlighting Goddess Parvati about immortality and how to achieve it. There is a story behind this that has been passed on for generations.

As per the story, Goddess Parvati wanted to know the reason Lord Shiva wore the Mund Mala. Mund Mala is the necklace of skulls that Lord wears around his neck. To this, the Lord replied that he added one skull to the necklace whenever she died and resurrected. Goddess Parvati became curious and asked him why is that he is immortal while she has to go through the cycles of birth and death. To satisfy her curiosity, Lord Shiva told her to listen to the Amar Katha, the story of immortality.

However, to tell her the secret, he decided that the selected place should be isolated and that no living thing must be able to overhear it. After searching for such a suitable place, he arrived at the Amarnath Cave. On the way, he let go of all living things associated with him such as Nandi, the snakes, his son Ganesha, the Five elements and the moon God so that none could overhear the secret.

Lord Shiva along with Goddess Parvati entered the cave. Lord Shiva sat on a deerskin and concentrated hard to make sure that no mortal was nearby to hear the tale. He created a Rudra named Kalagni and ordered him to eliminate all the living things around the cave. As soon as that was accomplished, he started narrating the tale. Unknowingly to both of them, a pigeon egg was hidden and alive beneath the bedding Lord Shiva used to sit and tell the story. A pair of pigeons eventually hatched out if it and became immortal since they had listened to that story. It is believed that this pair of pigeons can still be seen around the cave by the visiting pilgrims.

⭐ When was the Amarnath Temple Cave discovered?

The discovery of the shrine is contested by two versions. As per ancient epics, the valley of Kashmir was underwater for a long time. Sage Kashyapa drained the water from the valley by creating several rivers and their distributaries. Sage Bhrigu visited Kashmir on one of his spiritual journeys and stumbled upon the Holy Cave. It is believed that he was the first person apart from Lord Shiva and Goddess Parvati themselves, to visit the holy cave. As the news of the Linga spread, pilgrims began to arrive at the shrine to pay their respect to their beloved God and Goddess.

Another more recent story says that the cave was actually discovered 700 years ago by a shepherd named Buta Malik. As per his version, once, while roaming through the mountains, he met a Saint and was given a bag of coal to carry home. When he reached home and opened the bag, he found gold instead of coal. He was overjoyed and trekked back to thank the Saint. However, when he reached the spot, he could not find the Saint but in its place found the holy cave with the Linga. He ran back and announced his discovery to the villagers. Word of the cave spread fast and eventually, the spot became a pilgrimage undertaken by a large number of people every year.

As per the ancient Sage Bringesh, the importance of the holy cave is such that, anyone who visits the shrine attains moksha or enlightenment.

The areas surrounding the Pahalgam base camp are extremely significant from the mythological point of view. It is a belief that Lord Shiva left Nandi at Pahalgam (Bail Gaon), let go of his snakes at Lake Sheshnag, released the moon from his hair at Chandanwari, left his son Lord Ganesh at Mahaguna Mountains (also known as Mahaganesh Mountain), and left the five elements of Earth at Panjtarni. It is believed that he performed the Tandav dance at the site as a symbol of renouncing the earthly world.

It is believed by ardent devotees that this cave is the spot where Lord Shiva grants the boon of immortality to the other Gods.

The Amarnath Temple cave remains open to the public from July to August (Vyas Purnima to Shravan Purnima) only.

Here are the timings of the Amarnath Temple:

Devotees have to reach Panchkarni before 3:00 PM to take pony ride/ trek. If they reach after 3:00 PM, then they are not allowed to go to the temple on that day. They have to stay overnight in a camp in Panchtarni and then go for a temple darshan in the morning.

All yatris have to register at the Jammu and Kashmir Tourist Offices located at major cities of India like Delhi, Mumbai, Chennai, Kolkata, Hyderabad, Ahmedabad, Jammu, and Srinagar.

It is highly recommended that one gets themselves a complete medical checkup before proceeding for the Yatra. The trek involves walking for 42 km at a high altitude.

⭐ What to wear to the temple and why?

The Holy Cave is located at an elevation of 12,000 feet. The weather conditions are erratic as it may rain or snow anytime during the journey. The temperature may fall as low as -5 degree Celsius.

Hence, it is recommended that one should be dressed in heavy woollen clothes. Additional jackets, monkey caps, mufflers, ear-covering gear, thermal wear, and woollen socks. It is also advised to wear proper sports shoes for the trek.

Saree is very uncomfortable to wear for the women pilgrims during the journey and should be avoided, if possible.

⭐ What are the additional items ones should carry?

Raincoat, umbrellas, blankets, torches with spare batteries, flasks, and portable small tents or beds are highly recommended for the journey.

The devotees have to trek a distance of 42 km on foot from the scenic town of Pahalgam. For a person in healthy condition, the trek will take 4 – 5 days to complete. There are two approaches to the holy cave – the longer but traditional route from Srinagar (42 km) or the shorter new steep route (16 km) from a town called Baltal.

Every year, Amarnath Yatra is organized by the J&K State Government in collusion with the Shri Amarnath Shrine Board. The Government is responsible for providing necessary facilities like food supplies, power, telecommunication, water, tents, and ponies. Apart from the Government, there are several non-profit organizations set up pandals along the journey to serve the visiting devotees at free of cost.

These services are provided at the base camps along the trek like Sheshnag, Panchtarni etc.

Government aided and NGO aided tents are set up at strategic points throughout the trek route. They offer simple vegetarian food to the devotees. It is strictly advised to carry snacks like chocolates, toffees, biscuits, dry fruits, and medicines for altitude sickness.

If you have any questions about the Amarnath Temple, please leave a comment below, and we will get back to you within one hour.