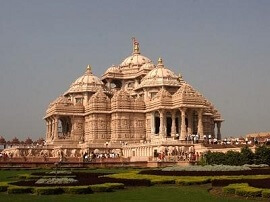 Akshardham Temple Delhi is dedicated to Sri Swaminarayan, the deity worshiped in the Swaminarayan sect of Hinduism. This sect is a sub-sect of Vaishnava Hinduism and has its origins in Gujarat. Followers of this sect believe that Swaminarayan is an avatar of the Nara Narayana who performed penance at Badarikashram. They believe that Narayana took rebirth as Swaminarayan to destroy evil and establish “Ekantik-Dharma”- a religion based on morality, knowledge, detachment and devotion.

Akshardham Temple Delhi Complex begins with the visit to the ten stone gates that signify the ten directions. The pilgrim then passes through the Bhakti Dwar (Gate of Devotion), the Visitor Centre and the Mayur Dwar (Peacock Gate).  Between these two gates, the Charnarving (holy footprints) of Sri Swaminarayan is located. The main attraction of the complex is the Akshardham Mandir.

The 141 feet high, 316 feet wide and 356 feet long Rajasthani pink stone structure presents an imposing view fit to be called as the Abode of God (Akshardham). Akshardham Temple Delhi has two circumambulation paths – the Narayan Peeth and the Gajendra Peeth. The Gajendra Peeth depicts the legends and the importance of Elephants in the Hindu culture.

The inner sanctum or the Garbhagruh is home to the Sri Swaminarayan and his succession of Gurus. Special shrines are also dedicated to Sri Sita-Ram, Radha-Krishna, Lakshmi-Narayan, and Shiv-Parvati. The nine intricately carved mandaps depicting stories of the life of Sri Swaminarayan are an architectural wonder.

The Neelkanth Darshan takes the visitors through an epic journey of the young Neelkanth across the Indian Subcontinent. The Sanskruti Vihar is a 15-minute boat ride that takes us past the glorious history of India in from the Vedic times till now. It highlights contributions of important personalities in various fields like philosophy, mathematics, art, music, economics and religious movements. Besides these, the Yagnapurush Kund, Garden of India and the Yogi Hriday Kamal are must visit features of the Temple Complex.

The Akshardham Temple Delhi was the vision of Yogiji Maharaj in 1968. Yogiji Maharaj was the fourth successor of Swaminarayan, worshiped in the Swaminarayan sect of Hinduism. His vision was to build a grand temple dedicated to Sri Swaminarayan on the banks of River Yamuna. However, his wish could not be realized before he passed away.

In 1982, Pramukh Swami Maharaj put forward a request to the Delhi Development Authority (DDA). In 2000, the DDA offered 60 acres of land and the Uttar Pradesh Government offered 30 acres of land. The construction was started on 8 November 2000 and was officially completed on 6 November 2005.

The Swaminarayan Akshardham Temple Delhi was inaugurated on 6 November 2005 by the honorable Dr. APJ Abdul Kalam.

As per the sect of Swaminarayan in Vaishnava Hinduism, the origin of the sect begins with the Nara-Narayana (twin brothers) avatar of Lord Vishnu. The Hindu Mahabharata identifies God Krishna with Narayana and Arjuna with Nara (the human among the twins). The followers of the Swaminarayan faith believe that Swaminarayan is an incarnation of Narayana.

The architecture of the Bhakti Dwar and the Mayur Dwar are mesmerizing. The Bhakti Dwar is intricately carved and possesses sculptures of several Gods and Goddesses like Lakshmi-Narayan, Akshar-Purushottam, Parvati-Shiv, Sita-Ram, Radha-Krishna, Nar-Narayan and many more. The Mayur Dwar has 869 carved images of Peacocks welcoming visitors. It is believed that Peacock stands for Beauty and Self-Control in Indian Culture.

The architectural style of the Temple Complex is a blend of several styles from across India. As per the traditional Hindu Shilpa Shastras, no ferrous material has been used for its construction. The structure receives no support from steel or concrete.

The majestic structure of the Akshardham Temple Delhi consists of 234 carved pillars, nine domes, Gajendra Pith (base of the structure carved with 148 elephants together weighing 3000 tons) and about 20,000 sculptures of Sadhus, Acharyas, and devotees.

The Narayan Sarovar that surrounds the Temple is unique as it consists water from 151 rivers and lakes believed to have been sanctified by Sri Swaminarayan. Some of the rivers, lakes and sangams are – Mansarovar, Pushkar Sarovar, Pampa Sarovar, Indradyumna Sarovar, Manikarnika Ghat, Prayag, River Ganga, River Yamuna, River Shipra and many more.

The Temple has been adjudged as the “World’s Largest Comprehensive Hindu Temple” in the Guinness World Records. However, the record is being contested by three temples – the Madurai Meenakshi Temple, Sri Ranganathaswamy Temple in Srirangam and the Annamalaiyar Temple in Thiruvannamalai. They argue that these three temples are as big as the Akshardham and are actually temples where the worship of God is carried out.

The Neelkanth Darshan exhibition is the first large format film on India, made by an Indian Organization, the BAPS Swaminarayan Sanstha. The theater houses New Delhi’s first and only large format screen.

The Yagnapurush Kund is India’s largest step well. The Stepwell means a series of steps, artistically arranged going down towards the centrally placed Yagna Kund. The Yagna Kund is Lotus shaped.

The Temple follows a general dress code as per which the upper wear of both men and women should cover shoulders, chest, navel and upper arms. The temple allows pants and shorts as long as they are below the knee-length. In case, the dress of the visitor is deemed inappropriate, a sarong is provided free of cost.

The Temple is decorated and lit with lights on occasions like Diwali, Navaratri, and Janmashtami

Abhishek – Devotees can perform the ceremony of ritual bathing known as Abhishek of the idol of Neelkanth Varni, the youthful form of Sri Swaminarayan. The ritual involves tying a sacred thread on the wrist followed by the recital of shlokas and mantras. After the Pooja, the devotee performs the Abhishek with a pot of sanctified water.

How to reach Akshardham Temple Delhi

New Delhi is a metropolitan and a cosmopolitan city that boasts a large array of hotels ranging from basic lodges to seven-star hotels. Akshardham is situated near residential colonies. However, important business areas like Noida are located nearby. They provide a large range of options for a comfortable stay.

The Premvati Food Court is open inside the Temple Complex. The ambiance of the food court resembles the Ajanta and Ellora caves. Pure vegetarian cuisine, as well as Continental cuisine, is served to the devotees at nominal rates.