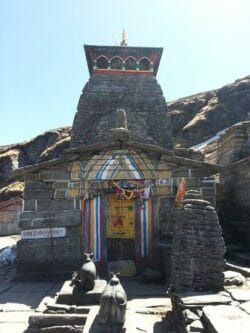 Tungnath Temple is one of the Panch Kedar temples of Lord Shiva, present in the Rudraprayag district of Uttarakhand. It comes second, if one follows the order of Panch Kedar temples. Also, it is the highest Shiva temple in the world. Moreover, Tunganath mountains form Mandakini and Alaknanda river valleys.

Tungnath temple is also a huge tourist attraction because it’s also a trekking destination along with being a pilgrimage site. Of all the Panch Kedar trek routes, the route to Tungnath is the shortest: only 4 km from Chopta that can be covered in approximately 3–4 hours. It is a part of the Char Dham Yatra PAckage in  Uttarakhand.

What is the history of Tungnath Temple?

According to history, Tungnath Temple is 1000 years old. Devotees believe that Adi Shankaracharya discovered the temple. As per alegend, Pandavas slew their kin Kauravas during the Mahabharata. Hence, Rishi Vyas advised them to go to Lord Shiva, because only he could absolve them of their sins.

However, Shiva kept hiding from them and took the form of a bull and went into hiding in an underground safe haven at Guptakashi. Later, Lord Shiva’s body parts as a bull rematerialised at five locations. The Pandavas then built Shiva temples in these five places, popular as ‘Panch Kedar’ (Find out more about the Char Dham Yatra). Tungnath is the place where the bahu (hands) appeared.

What is the significance of Tungnath Temple?

The significance of Tungnath Temple is that it has a local Brahmin priest, unlike the other Panch Kedar temples which have priests from southern India. Also, Maithani Brahmins officiate as priests at this temple. Devotees believe that Adi Shankaracharya set this tradition. Moreover, the temple remains closed during winters.

Then, the symbolic image of the diety is shifted to Mukkumath. Tungnath is at the top of the ridge which divides the waters of rivers Mandakini and Alaknanda. Moreover, the temple lies about 2 km below the Chandrashila Peak. Most of the pilgrims arrive at the temple during summers because it becomes inaccessible during winters because of extreme weather conditions.

What are the timings of Tungnath Temple?

Here are the timings of Tungnath Temple:

What are the festivals celebrated at Tungnath Temple?

Some of the festivals celebrated at Tungnath Temple are:

How to reach Tungnath Temple?

Here’s how to reach Tungnath Temple:

Where to stay near Tungnath Temple?

Some of the places where one can stay near Tungnath Temple while undertaking the Char Dham Yatra are:

What are the other Panch Kedar destinations?

The other Panch Kedar destinations are:

These temples are also a part of the Char Dham Yatra destinations within Uttarakhand.