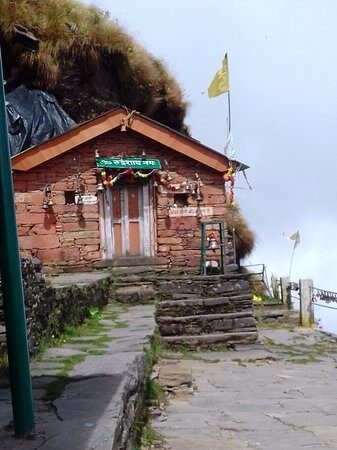 Rudranath Temple is one of the Panch Kedar temples of Lord Shiva, present in the Grahwal region of Uttarakhand. It comes third, if one follows the order of Panch Kedar temples. It is followed by Madhyamaheshwar and Kalpeshwar temples. Moreover, the face of god Shiva is worshipped as “Nilkanth Mahadeva” here.

Many people consider Rudranath as the most difficult temple to reach, among the Panch Kedar temples, which are the five holy temples of Shaivite dedicated to Lord Shiva. Moreover, the Garhwal region is also called the Kedar-Khanda because ‘Kedar’ is a local name for Lord Shiva. It is a part of the Char Dham Yatra Destinations within Uttarakhand.

What is the history of Rudranath Temple?

According to the history, Pandavas established the Rudranath temple. Pandavas slew their kin Kauravas during the Mahabharata. Hence, Rishi Vyas advised them to go to Lord Shiva, because only he could absolve them of their sins. However, Shiva kept hiding from them and took the form of a bull.

Then, he went into hiding in an underground safe haven at Guptakashi. Later, Lord Shiva’s body parts as a bull rematerialised at five locations. The Pandavas then built Shiva temples in these five places, popular as ‘Panch Kedar’ (Find out more about the Char Dham Yatra). Rudranath Temple is the place where the face of Lord Shiva appeared. At Nandikund, devotees worship old historic swords protruding from the rocks, believing them to be of Pandavas.

What is the significance of Rudranath Temple?

The significance of Rudranath temple is that pools like Surya Kund, Chandra Kund, Tara Kund and Manas Kund surround it. There are also peaks such as Nanda Devi, Trishul and Nanda Ghunti present near the temple. Moreover, it is the toughest trek to reach compared to other Panch Kedar temples.

Before visiting the temple, devotees take a holy bath in the Narad Kund. As per beilefs, the deity appeared by itself, and hence is a ‘swayambhu’. It is a Shivalinga whose shape is like a human face. Also, the holy river Vaitarani or Baitarani or Rudraganga flows near the temple. Devotees believe that this river leads to salvation and hence, they come here to perform the last rites of the deceased.

What are the timings of Rudranath Temple?

Here are the timings of Rudranath Temple:

What are the festivals celebrated at RudranathTemple?

Some of the festivals celebrated at Rudranath Temple are:

How to reach Rudranath Temple?

Here’s how to reach Rudranath Temple:

Where to stay near Rudranath Temple?

Some of the places where one can stay near Rudranath Temple while undertaking the Char Dham Yatra are:

What are the other Panch Kedar temples?

The other Panch Kedar Temples are:

These temples are also a part of the Char Dham Yatra Destinations within Uttarakhand.