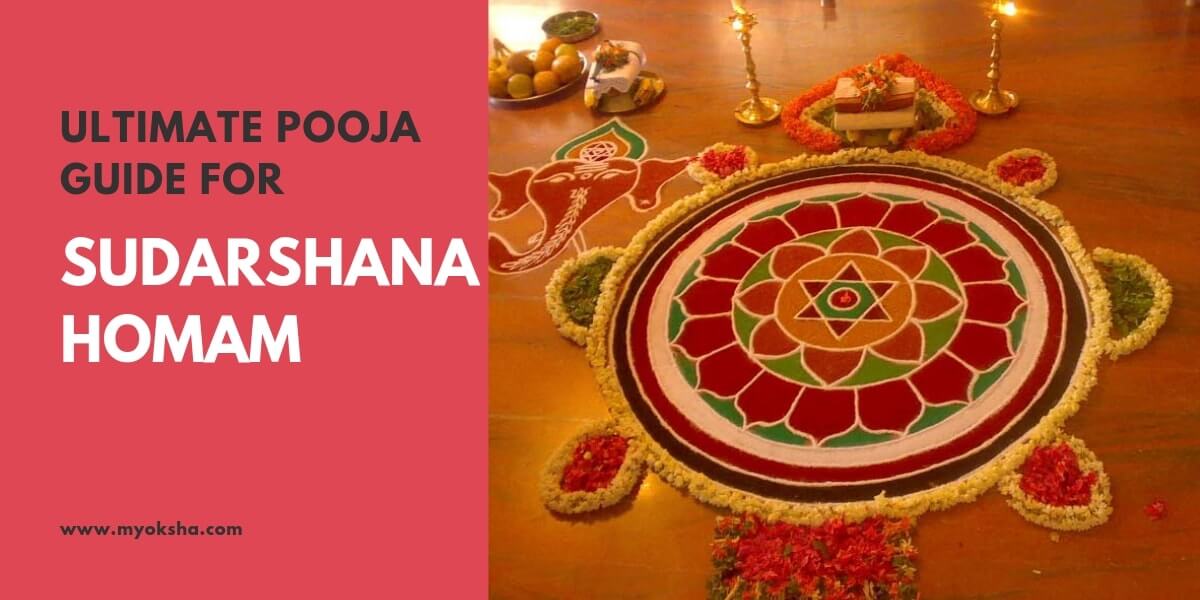 Sudarshana Homam is a Hindu ritual involving fire. Participating in Sudarshana Homam helps a person destroy negativity, gives him victory over the enemies, and protects against the evil eye.

The homam grants purification and helps in restoring energies and health. It also promotes success and provides deep levels of purification.

Sudarshana Homam owes it’s origin to the Sudharshana Chakra which is among the major psychic weapons of Lord Vishnu who is the preserver as well as the sustainer of the Universe. Lord Vishnu has always been portrayed as holding the mighty Sudharshana Chakra which is a kind of a wheel, in one of his hands. This is his weapon and he always triumphantly flings it at the negative forces to forcefully slice them with a spinning motion.

Who should perform Sudarshana Homam?

A person should perform Sudarshana Homam if he/she:

Here’re the benefits of participating in Sudarshana Homam:

When should I perform Sudarshana Homam?

One can also perform the homam on Ekadashi, Dwadashi, and Poornima. Also on the dates that fall on a Wednesday and Saturday or during Buddha Horas are also favorable for performing the Sudarshana Homa.

What is the procedure for performing Sudarshana Homam?

The Sudarshana Homam is the best protection from all the evils, dosha nivaran and to get relief from the troubles from enemies, evil eye, black magic, and fear. It also helps in persecution by evil spirits and health problems.

Here’s how to perform Sudarshana Homam:

What are the materials required for Sudarshana Homam?

The major requirements for the Homam are the Sudarshana Yantra, which is worshiped with Sudarshana Mantra Japa. The Homam requires the Homa samagri including molten butter, herbs, and sticks of certain trees that one needs to offer into the sacrificial fire along with the powerful chanting of mantras.

Apart from this the offerings to Lord Sudarshan also include fruits, flowers, incense sticks, and the Naivedhyam Prasad. Pooja of the owner of Sudarshan, Lord Vishnu has to be performed with Tulsi leaves.

Where to Perform Sudarshana Homam?

This Homam should take place at a Mahavishnu temple by a professional priest. If you want it to take place at your home, then you need to consult a learned Brahman.

Can I perform Sudarshana Homam at home?

Yes, you certainly can perform the Homam at home. However, please take the help of a learned pandit and perform at home.

What is the cost of Sudarshana Homam?

Major costs of the Homam are that of the ingredients and dakshina for priests. The ingredients cost somewhere between Rs. 2000/- to Rs. 3000/-. Thus the total cost of the Homam is less than Rs. 10,000/-. If the homam takes place at the temple, then there could be additional fees.

What is Sudarshana Homam Mantra?

To get blessings of Lord Sudarshana, it is advised to chant this mantra daily. Here are the Sudarshana Homam Mantra Lyrics.

This Homam takes place in all major Indian languages and Tamil is one of them. Please consult a Tamil Pandit.