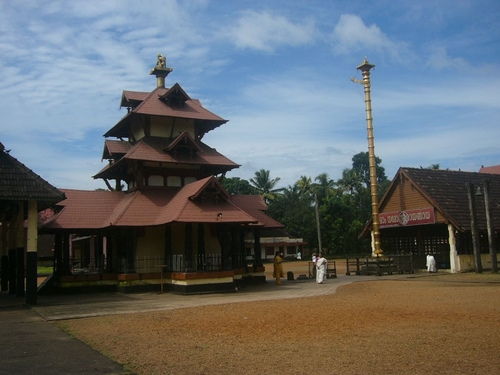 Sree Vallabha Temple is located at Thiruvalla in Pathanamthitta district of Kerala. It is a 400-year-old temple on the banks of the River Manimala. The temple has a beautiful 8 ft idol of Sree Vallabha within the sanctum sanctorum. The legendary architect Perunthachan constructed the unique Garuda Sthambha. 54 ft flag mast is made of a single block of granite.

Sree Vallabha Temple is considered as the most important temple for Vaishnavites all over India due to the presiding deity is Lord Maha Vishnu. As offerings by devotees Kathakali is performed almost on all days in Thiruvalla Temple. It is believed that its bottom touches the water table. Thiruvalla Temple has a Garudathara, which is unique and appeared magnificent. This also has a Garuda’s image atop.

There are sub-shrines around the Thiruvalla temple for Ayyapa, Karuppaya Swamy etc. The idol on the pillar is depicted as like a human form with beaks, and wings stretched and hands bowing. There is a legend that when the Garuda’s idol was erected on those pillar centuries back. It was about to fly off and so placed it in position by chains. It was erected after two years of consecration of Sree Vallabha’s idol. The idol of Maha Vishnu or Sree Vallabha was sculpted by Viswakarma at the behest of Lord Krishna and was given to Satyaki at the end of Dwapara Yuga.

Towards the end of Dwapara Yuga, Lord asked Garuda to keep the idol in safe custody. Keeping this in mind Garuda kept it in Netravati river which flows from Karnataka to Kerala. Later, the royal consort of Cheraman Perumal – the emperor of Kerala had a dream that the idol of Krishna was lying on the bed of Netravati river. All efforts were taken to search the idol.

Vadakkenada remains closed throughout the year except on the day of ‘Uthra Sree Bali’.  All the three Goddesses assemble together in the ‘North Nada’. The doors of the north gate tower are opened only at this auspicious time and the Goddesses are received with all spiritual austerity. Thousands of devotees assemble to see the majestic scene and also to offer their worship to the great Lord Vishnu along with the three goddesses. They are supposed to be the part of the almighty himself. All the three goddesses are taken to the ensign where the goddess Padappadu and Karunattukavu. Alumthuruthy goes inside the temple to invite Sreevallabha and Sudarsanamurthy.

One of the most important festivals of the town, Ekadasi Festival is celebrated on the eleventh day of every lunar fortnight. The Vrishchika Ekadasi has special importance in the town. A highlight of this festival is the commemorative plaque for Gajarajan Kesavan.

This festival is celebrated on the day of Pushya in the month of February-March and is meant for the purification and revitalizing the powers of the deity.

Kathakali had become the greatest offering to Sreevallabha. The devotees of Sreevallabha used to offer Kathakali to him. This is the only temple in India where the maximum number of Kathakali are being performed every year.

By Train: Thiruvalla Railway station is about 30kms South of Kottayam on the Ernakulam-Kottayam-Kayankulam rail route. The temple is roughly 3 km from the railway station. It is also well connected to major cities like Chennai, Delhi and Mumbai via Kanyakumari Express, Trivandrum Express, and Kerala Express.

There are numerous hotels and restaurants for the convenience of the hoards of tourists visiting the destination. Restaurants are the perfect places to eat, drink and be merry. These are restaurants that offer a wide variety of delicacies and most of them are pretty affordable too. It is designed to suit everyone’s budget and taste.

Kaviyoor Mahadeva Temple: Kaviyoor Mahadeva Temple is one of the most ancient and popular Hindu temples located at the village of Kaviyoor. It is at a distance of 6kms from Thiruvalla town in Pathanamthitta district, Kerala. Aval Nadyam and Vada Mala is the main offering to the presiding deity at Kaviyoor Mahadevar Temple. This can be offered after making a receipt from the counter. There are a number of rituals that are performed to please the presiding deity on a daily basis. Kaviyoor is another noted shrine which stands on a small hillock. It is built in the gable style architecture peculiar to Kerala.