Matheran is a famous hill station in the district of Raigad in the town of Karjat. It is the smallest hill station in India that attracts lakhs of tourists every year. Matheran is a beautiful tourist destination that attracts many tourists to visit it. The beautiful old british style architecture is preserved in Matheran. For those who want to savor the delights of this scenic beauty, the 38 peaks offer the best views of the hill station. There are indeed many view points in Matheran which will give the panoramic view of the plains below. It offers stunning views of the Sahyadri ranges  and an amazing view of the lights of Mumbai. The various tourist attractions in this place are worth paying for the one who loves the nature beauty. Till date Matheran has maintained and retained the 19th Century colonial ambience. One of the oldest temples located in the hill station of Matheran in the state of Maharashtra in Western India is the Pisharnath Mahadev Mandir. It is one of the few places where there is a presence of Swayambhu Linga which means that it is not build by anybody. The main deity of this temple is Pisharnath who is the village deity. Due to this, the temple is of great significance for the people. The Lingam appears to the devotees as the shape of “L” and it is largely covered with sindhoor. As a result of natural phenomena the stones or the ice forms itself into the shape of Shiva Linga. This temple is located at a height of about 2625 feet above the sea level and is the only hill station in Asia that is free of automobiles. It is located on the banks of a lake which is now known as ‘Charlotte’. 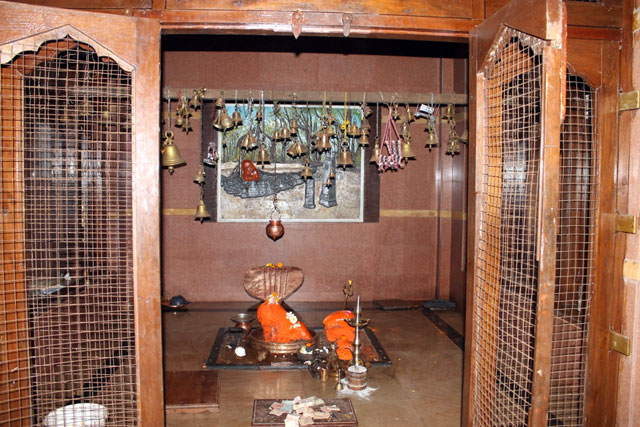 Significance of the Pisharnath Mahadev Mandir

The timings of the temple are for 6.00 AM to 12.30 PM and 4.00PM to 9.30PM for the devotees.One of the best time to visit this temple is from September to November and February to March.

Mahashivratri is celebrated on a grand scale here. It is the hindu festival of India celebrated annually in reverence of the God Shiva. Number of devotees come to visit the temple. It is believed that Lord Shiva goes to meet Lord Rama in the Rama Temple and there is a procession through the market of the hill station.

It is celebrated with Lord Rama visiting Lord Shiv in the Temple, again with a procession and celebrations throughout the market. Both those days are of major importance with the localites and the procession of the Gods are done in Palkhis!

By Air : Mumbai Chatrapati Shivaji International airport, which is 187 km away from Raigad, is the nearest airport. All the major airlines have service from Mumbai to all major cities in India and many cities abroad including Singapore, Hong Kong, Colombo and gulf countries. Taxis are available from Mumbai to Raigad and costs about Rs 3,000.

By Train : Vir Dasgaon railway station is the nearest railhead to Raigad. This station is connected to Mumbai and Pune with regular trains. Taxi services are available from Vir Dasgaon to Raigad. A Journey by the railways is recommended as it gives the visitors an opportunity to see the beautiful scenery along the way. Moreover, toy trains plying between Neral and Matheran will drop you at the Matheran railway station itself that gives the visitors an experience of a beautiful journey followed by an arrival at a historical landmark.

By Road:  Taxis are another way to get around town. They can be hired from nearby cities and used for local transport as well. Taxis charge around Rs 1500 per day.  A/C taxis and SUV’s such as Toyota Qualis are also available. State transport offer bus regular and frequent services from Mumbai and Pune to Raigad. Raigad is well connected to all neighboring cities by the public transport buses, including Kolhapur (250 km), Pune (102 km), Mumbai (187 km) and Mahabaleshwar (75 km). Public bus charge is less than Rs 4 per km. If you choose to go by car, Matheran is a short hundred kilometre drive from Mumbai. You can leave your car at Dasturi point and take a pony or a hand pulled rickshaw till the main market place from here.

Local Transport: There is a toy train that takes you to the hill station, then there are hand rickshaws that will take passengers up the hill. The best thing to do would be to trek up Matheran and then visit the temple.

Hotels in Matheran: Where to stay

There are many good hotel in Matheran where one can stay. Starting with all prices.

There are various hotels around that offers a wide variety of food, for vegetarians as well as non vegetarians. There are also small market places besides the road. Chikki of matheran is very famous, which is a confection made of gram flour, jaggery and cashew nut. Nariman Chikki Mart located near the railway station in Matheran, is by far the most popular. For the snacks purpose there is Mumbai’s most famous Vada Pav and other foods like Misal, Usal and Jalebi. Food here is the mixture of Maharashtrian and Gujarati dishes. So there are many restaurants in Matheran that will offer the pure Vegetarian meal.

If you want to try the Gujarati thali than Hotel Gujarat Bhavan and Hotel Regal are the best places to go. Hotel Laxmi also offers the traditional Gujarati food but it is less spicy. Besides there are other restaurants Garden View restaurant, Dilawar Bakery that offers you an amazing bakery stuff, Tree Top Restaurant, Deepak Restaurant and many more.

Ram Mandir: The temple is dedicated to Lord Rama, the incarnation of Lord Vishnu. The temple is visited by devotees from different places. The shrine is bounded by the famous market road where one can obtain various accessories and is popular visiting spot.

Shiv Mandir: This temple was built in 1893 by Shri Jagmohandas Samuldas, a Kapol vanik. Mahashivratri  vastly celebrated throughout Matheran, where the Lord Shiva goes to meet Lord Rama in the Rama Temple and there is a procession through the market of the hill station.

Shivaji’s Ladder: Shivaji’s Ladder and its steps look like a ladder and goes down from One Tree hill point to the Matheran valley. It is said that the Chathrapathi Shivaji Maharaj was using the place as a way for his pleasure trips and hunting options in the Matheran hills. It was rediscovered in 1850 by Hugh Mallet the then collector of Thane District under British rule.

Prabal Fort: The historical fort was captured by Chhatrapati Shivaji Maharaj from Mughal. It is Located on top of Prabal Hills at 2325 feet above sea level, the fort is located 8 km from Panvel. The fort had two gateways and eleven towers in the fortifications and in the year 1818, the gateways were destroyed in the fights.

Other Tourist attractions include

Charlotte Lake: Also known as Sharlott Lake, Charlotte Lake is the prime source of drinking water to Matheran and was built in 1956. The picturesque lake is nested in lusting greenery and attracts many visitors during monsoon.

Echo Point: Echo Point is the central point of the Matheran and most popular among other points. The point offers a panoramic view of the hill station. Echo point is known for echo of screams and yells can be heard from here.

Panthers Caves (Waghachi Gufa): Panthers caves is group of thirty rock caves. Some of these natural caves are dry and some little bit muddy. It is said that a tiger used to live in these caves. The natural formation of the caves attracts many tourists for exploring the unique entity.

Morbe Dam: The dam is built by Maharashtra Jeevan Pradhikaranon Dhavari River near Khalapur, Raigad district. Morbe Dam is located around 30 km Matheran and popular for weekend picnic from Mumbai and Pune.

Toy Train: Toy train is essentially the travel attraction of Matheran. Moving through the scenic beauty gives a very and calming experience to the visitors.