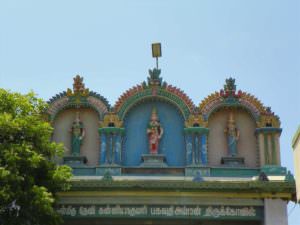 Kumari Amman temple is 3000 years old and is for Devi Kanyakumari. She is the virgin goddess who stands strong protecting her devotees. She is “Devi” or “Bhagavathy” that refers to “Durga” or “Parvati”. Devotees also worship Devi as Bhadrakali.  The temple is on the seashore of Kanyakumari, Tamil Nadu.

According to popular beliefs, the Goddess removes the rigidity of our mind. Devotees actually feel the emotions in their mind when they pray to the goddess in devotion and contemplation.

What is the history of Kumari Amman Temple?

According to history, worship of Devi goes back to Vedic times and monotheism to Advaita times. Devi Kanyakumari finds mention in Ramayana, Mahabharata, and Sangam work Manimekalai. Devi Kanyakumari has a mysterious story that once Banusura, the demon king got power over Devas and gave cruel punishment to them.

The Devas performed a Yagna seaking to punish and remove the evils.  So Devi Parasakthi came to Kumari in the form of a virgin girl and began her penance. Meanwhile Lord Shiva fell in love with her and made arrangements for the marriage in the midnight on a particular day.

Now the Narada realised that their marriage would destroy the chances of castrating Banusura because only a virgin could kill him. When Lord Shiva was on his way to Kanyakumari, Sage Narada assumed the form of a cock and crowed falsely heralding the break of dawn. Thinking that the auspicious time for the marriage was past, Lord Shiva returned disappointed. The Goddess too decided to remain virgin after that. Then, when Banusura attempted to win the Goddess by force, she killed him with her Chakragudha, and relieved the sufferings of Devas. Then she resumed her penance and remained virgin.

What is the significance of Kumari Amman Temple?

Significance of Kumari Amman Temple is that it is one of the 51 Shaktipeethams – or divine abode of Goddess Shakti. One of the hundred and eight “Durga Alayas”, this Temple is for  Goddess Durga. Swami Vivekananda visited this Temple in December 1892, as told by Sri Ramakrishna Paramahamsa.

The nose ring of Devi Kanyakumari is designed with rubies. They are so bright that it could be seen even from the far at night.

It is said that some ships sailing in the sea, mistook the brightness of the rubies as the light from the Lighthouse and got wrecked, hitting against the rocks nearby. Due to this reason, the eastern side gate of the Kumari Amman Temple is kept closed.

The eastern door of the Temple is opened on new moon days in the months of Edavam, Karkkidakam (Capricorn and Cancer), during Navaratri and in the month of Vrischikam.

Walking around the outer corridor and crossing the Navaratri Mandapam, the pathway leads to the second corridor encircling the shrine. At the entrance here, is the Kala Bhairava Shrine and the well “Patal Ganga Teerth” which provides water for the Devi’s Abhisegham. After this is the Dhwajastambha (flag mast).

What are the Timings of Kumari Amman Temple?

Here are the timings of Kumari Amman Temple:

Which festivals are celebrated at Kumari Amman Temple?

Some of the festivals celebrated at Kumari Amman Temple are:

How to reach Kumari Amman Temple?

Where to stay near Kumari Amman Temple?

Some of the places where one can stay near Kumari Amman Temple are:

What are some temples near Kumari Amman Temple?

Some temples near Kumari Amman Temple are: