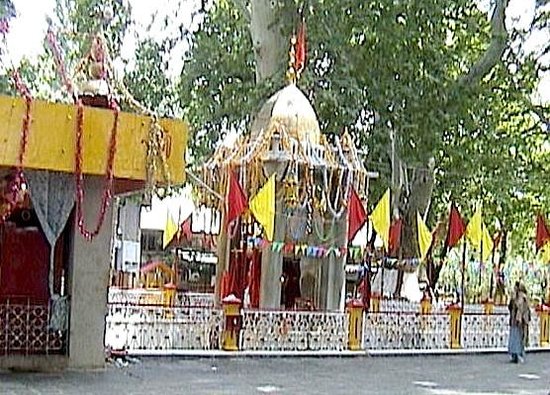 Kheer Bhawani Temple in Srinagar is one of the most picturesque and popular temples in the northern state of Jammu & Kashmir. It has been dedicated to the locally prevalent Goddess Kheer Bhawani (originally she was revered as just Bhawani).

The temple has been constructed on a sacred spring and this is one of the major attractions of the temple. The Kashmiri Hindus universally worship Goddess Kheer Bhawani and she is among the most respected Goddesses in the community.

The famous temple is located about 14 miles in the east of the Srinagar city and is near the village Tul Mul. It is protected by the Indian Army and the soldiers ensure the name of the temple is derived from the word kheer meaning rice pudding that is a popular prasadam offered.

Many people believe that there was a mulberry tree near the holy spot of the temple and in the local language, it is called tulmul. Hence, the place derived its name. The goddess has many names as it is a custom with most Hindu deities. She is called Maharagya Devi, Ragnya Bhagwati, Ragnya Devi and Rajni.

According to stories, the Goddess Maharagya was extremely pleased with the devotion of the demon Ravana and she appeared before him. Ravana then got the image of the Goddess that he saw, installed in Sri Lanka. But the Goddess became displeased with the brutal and wicked life of Ravana and as a result, she was no more pleased to stay in Sri Lanka. Therefore, according to a popular legend, she instructed Lord Hanuman to get her image from there and this was installed here at the holy spot of Tul Mul.

Ragniya is one of the Rupa or incarnations of Goddess Durga and the one at Tul Mul is a Vaishnav Rupa. In the Kashmir, Ragniya is known as Tripura. In Sri Lanka, the Mother Goddess was popular as Shayama. Goddess Sita (the consort of Lord Rama) is also believed to be an incarnation of Goddess Ragniya. According to Ragniya Mahatmya, those who meditate on the PanchDashi Mantra during Navreh (New Year in Kashmir), the Mother Goddess Ragniya grants all their wishes.

Another legend states that the temple is the spot where Lord Rama had worshiped Ragnya Devi while he was in his exile. Lord Rama asked his devotee Lord Hanuman to shift the Goddess form, Lanka, after the exile period was over. Hence, Lord Hanuman brought the seat of the Goddess to Shadipora first and later she was shifted to the current site.

According to popular mythology, the night during which the Mother Goddess was brought from Sri Lanka to Kashmir has been termed as Ragniya Ratriand. This is a major festival among the Kashmiri Pandits. Many shrines have been dedicated to the goddess in Kashmir at Tiker, Manzgam (Noor-abad) Bheda, Bhuvaneshvar, Lo-qraer-pur, Rai-than, Mani-gam and Baed-pur but the one at Tul-Mul has been the most famous one and so this shrine is a focus of the pilgrims. 360 springs (nagas) are believed to have gathered at this spot.

The Ragniya form of the Goddess is Sattavie form which means the form of bliss and tranquility. Kheer Bhawani has been mentioned elaborately in the Kalhana’s Rajtarangini. The texts mention that the sacred spring of the Tula Mula region is situated in a marshy ground. This spring has been named as the Mata Ragini Kund (pond). The Brahmins of the Kashmir region worship this spring and the pilgrims from all comers of the country visit here to have the pious darshan of this place and of Maharagini as the form of Goddess Durga Bhagvati.

According to the text of Rajtarangini, Tula Mula, and the Maharagya spring both have been considered extremely sacred and the region’s Brahmins of Tula Mula are considered to have immense spiritual prowess. As stated by legends, during the Samvat 4041 of the Hindu lunar calendar, when the sacred Spring of Tula Mula in Kashmir was inundated under the sway of the floods, the holy place couldn’t be seen anywhere and couldn’t be traced. It was then that Yogi Krishna Pandit of Kashmir had a dream and the Goddess appeared to him to direct that she will be swimming in the form of a snake at some proper place and asked him to demarcate the holy spot with large poles in the marsh land. The holy spot was subsequently discovered at the same spot as directed by the Goddess.

The place had also uncovered the ruins of an old temple and shrine slabs that were engraved with figures were discovered and many images were found. In the 1920s, Maharaja Pratap Singh, an ardent disciple of Goddess got the marble temple made in the middle of a spring that shines similar to a pearl in the midst of a shell.

Another mention of the temple is in the book Ain-i-Akbari where Abu’l-Fazl ibn Mubarak had mentioned the area of the Tula Mula extending over a hundred bighas (units of land area) that used to sink in marshy lands during summers. The holy place was also visited by Swami Rama Tirtha and Swami Vivekananda. When Swami Vivekananda visited the temple, during his stay, he ritually worshiped Kheer Bhavani and he communicated with the Goddess.

The sacred spring situated here is uniquely septagonal and has been dedicated to Goddess Kheer Bhawani. The spring flows from the west direction to the east. This holy spring mysteriously changes its color in various hues including red, pink, orange, and green, blue, white and this was noted by both Abul Fazal and Swami Vivekananda. The spring located at a distance of 27 kms from Srinagar, in Jammu & Kashmir of India, and is considered to be a form of the Goddess Mata Ragnya Devi.

Significance of the Kheer Bhawani Temple

Kheer Bhawani temple is highly important among the followers of the historical Vedic Religion in the Kashmir region and the followers are called Kashmiri Pandits. The area around the temple is covered with smooth and beautiful stones and large and old chinar trees that grow near the temple which is a popular place for the pilgrims to sit or sleep on the soft mats of grass. A major significance of the temple is due to the occasional change in the color of the spring water which when black or darkish is believed to indicate inauspicious times for the Kashmir region. This popular belief was reinforced at the time of the visit of Walter Lawrence, the-then British settlement commissioner for land in 1886. He visited the spring and reported the water of the spring having a violet tinge. A darkish or murky tinge was observed by the locals in the spring water just before the assassination of ex-Prime Minister Indira Gandhi and during the infamous 1989 insurgency in the valley.

Kheer Bhawani Temple is open from morning 6AM to 8PM every day.

This time of the festival on the eighth day of the full moon holds high significance for the devotees of the temple’s presiding deity Ragnya Devi. The temple serves as the main venue for the annual celebrations on the occasion of Jesht Ashtami. A large number of Hindus gather at the temple and seek the blessings of the goddess. The temple also gains special visitors during the occasion of Shukla Paksh Ashtami. Many havans/yagys are performed by the holy men during the festival to please the goddess.

The Kashmiri Pandits hold special reverence towards the temple and thus they perform many rituals at the temple to please the Goddess and to keep their region safe from any external danger. It is believed that there were 360 springs surrounding the main temple earlier that disappeared and the land became marshy and so the Kashmiri Brahmins for whom the Kheer Bhawani is the presiding deity perform special yagys here to protect the temple. A lot of people also visit here for a pilgrimage and chant mantras for their Goddess.

How to Reach By Road, Rail & Air

Kheer Bhawani Temple is located in the village Tul Mul at a distance of 1 hour, 14 miles in the east of Srinagar in Jammu and Kashmir. The temple is guarded by soldiers from all around and from a distance as many devotees visit here so while visiting the devotees first need to register near the entrance gate. Srinagar can be reached from all parts of the country through rail, road as well as airways.

By Air: There are regular flights from all the major cities of the country to Srinagar and the Srinagar Airport is the major airport.

By Bus: Regular buses can be caught from Srinagar to all other major cities of the country and back. The major bus stand is at Srinagar.

Srinagar has many 3-Star, 4-Star, 5-Star hotels as well as many luxurious resorts like Hotel Akbar, The Lalit Grand Palace and Vivanta Dal View by Taj. It is also house to many houseboats and many inns, cottages and private residences.

Srinagar is a wonderful city poised with natural beauty and nestled among mountains. The city is situated on the banks of the Jhelum and has many diverse temples of great architectural grandeur. The city has beautiful gardens and lakes. Some of the major tourist attractions of Srinagar are the Dal Lake, Shalimar Bagh, Nishat Bag and Jami Masjid.

The Kheer Bhawani Temple of Srinagar has been a temple of special importance among the Kashmiri Brahmins and so does the city of Srinagar that is visited by many tourists. A temple is a place with immense natural beauty and thus is worth a visit.