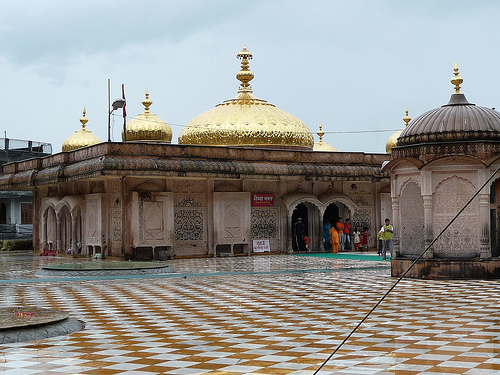 Jwalamukhi Temple located in Kangra Valley in Himachal Pradesh is famous and is considered extremely sacred for Hindu devotees. This place is known for being a temple that doesn’t house any idol, and the worshippers pay respects to the flame inside the temple which is believed to be the manifestation of Goddess Jwalamukhi.

It is one of the 51 Shaktipeetas where Goddess Sati’s tongue fell. According to Hindu mythology, when Lord Vishnu cut Sati’s corpse by using his Chakra, her body got scattered into 51 pieces at various places where Jwalamukhi is considered as one such place where her tongue fell. The temple consists of a copper pipe from which natural gas is emitted and priests of the temple lit it to produce a flawless blue flame.

Legend has it that Lord Shiva killed Jalandra, the demon whose flaming mouth represents the Jwalamukhi (‘Jwala’ is Flame and ‘Mukhi’ is ‘mouth’). The flames are believed to be coming from his mouth. A total of nine flames are ignited in the temple, which represents and also named after the nine Goddess-Mahakali, Annapurna, Chandi, Hinglaj, Vidhya, Basni, Mahalakshmi, Saraswati, Ambika and Anji Devi which burn every day without fail.

It is believed that the Raja Bhumi Chand Katoch of Kangra, a great devotee of Goddess Durga dreamt about this scared place and ordered his soldiers to have a lookout for this place. After discovering the site, the Raja built the temple at this very location Jwalamukhi Temple is built in modern having its dome made from gold and a beautiful folding door crafted out of silver plates.

There are a lot of good rated hotels that one can find near Jwalamukhi Temple.One can accomodate these hotels which are located within 1 km radius.

There are many good restaurants that one can visit after paying respects to Goddess Sati. Also Kangra is known for its various food joints that one can enjoy after visiting this place.