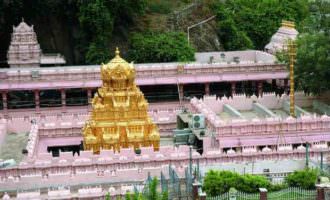 One of the most popular temples in and around Vijayawada, it is located on a hill Indrakeeladri overlooking the city as well as the River Krishna. Mother Kanakadurgeswari is considered as the supreme Goddess of Andhra Pradesh, seated atop the Indrakilaparvatha at Vijayawada.

There is a ghat road which was laid in 1969, most of the pilgrims prefer to climb the steps leading to the temple an arduous task for women and children. Some devotees climb the hill, decorating the steps with turmeric powder and vermilion. There are inscriptions of different dynasties found in the temple.

Hiuen Tsang, the Chinese traveler visited this temple. It is mentioned in the Vedas that,  the deity in the Kanaka durga temple is regarded as ‘Swayambhu’ or self-manifested, hence considered very powerful. It is also believed that Adi Sankara visited this temple and installed the Sri Chakra here.

In good olden days a Yaksha named ‘Keela’ had been performing awful penance about holiest goddess Durga. Goddess Durga was pleased with his penance and appeared to him. She asked him to beg a boon. Keela was so happy by the words of goddess Durga and begged her to be in his heart always.

Goddess Durga gave the boon, by showering the lunar lights of smile and said “My Son! You remain here at the holiest planes of river Krishna in the form of a mountain. In Krithayuga, after the assassination of demons, I will remain in your heart”. As per the orders of the Goddess Durga, Keela was waiting for the Goddess  in the form of a mountain.

Thus, Keeladri became the abode of Durga. She took the form of Mahisasura Mardini with eight arms holding different weapons, riding on a lion and trampling Mahishasura on the hill of Indrakeeladri. Her consort Shiva took his place on an adjacent hillrock as Jyothirlinga.

He was worshipped by Lord Brahma with jasmines (Mallelu) whereby he got the name of Malleswara Swamy. As celestial beings like Indra visited the place, the hill came to be called Indrakeeladri.

According to another mythology associated with this place is that Arjuna prayed to Lord Shiva on top of Indrakeela hill to win His blessings and the city derived its name “Vijayawada” after this victory. Since goddess Durga shined on this mountain with golden colour glowing, the name ‘Kanakachala’ also attained by this mountain.

Vijayawada is surrounded by many hillocks and the most important of them is Seethanagaram while the less important is called the Kanakadurga or Kanaka konda. On the southern side of the Kanakadurga temple, is a hillock with sculptures bearing inscriptions, indicating the names of Gods and Goddesses.

It is believed that the great saint Sri Sri Sankara Bhagavatpadulu visited this temple in the 8th century and installed “Sri Chakra” at the feet of the goddess. The temple was constructed during the rule of Moghal rulers where the Moghal Emperor Thanisha, with the assistance of his Ministers Akkanna and Madanna, managed the temple.

The epics Kaalika Puraana and Durgaa Sapthashati and other Vedic literature have mentioned about the epitome of beauty, Goddess Durga.

This place was an uninhabited area and the prays made by the people forced Lord Shiva to ask the Hills to make way for the flow of the river and the river started to flow via a tunnel is known as Bejjam which is believed to be constructed by Lord Shiva and this is the reason why this area is known as Bezawada.

This is a place of peerless spiritual significance and a very attractive pilgrim in Andhra Pradesh, which occupies a very special place in the scriptures of great Siva-Leelas and Shakti Mahimas. The scenic beauty of this place attracts both pilgrims and nature lovers.

The timings for Anna Prasaddam is from 5.00 AM to 10.00 PM where free and unlimited food is offered to all the pilgrims. About 5000 pilgrims are being provided with free meals. According to the Anna Prasadam, scheme devotees may pay Rs.1,116/-., this will be deposited in the bank and with the interest gained by it, 8 people can be fed on one particular day desired by the donar. If these devotees pay Rs. 5,116/-, 35 people will be fed on one particular day in a year.

Avoid shorts, shirts, tanktops and dresses exposing legs. Use of Cell phones and photography is restricted inside the Kanaka Durga Temple.

Festivals celebrated at this Temple

Vasantotsavam or Vasanta Navaratri in Chaitra masam: A large number of devotees from different places across the country visit the temple for the darshan of the goddess and also be part of the week-long Chaitra Maasa Vasantha Navaratri Utsavaalu. There are different poojas that are performed and there are different varieties of flowers that are offered by the devotees as part of Laksha Pushpaarchana Puja. It is than followed by Chaitra Brahmotsavam which is celebrated in the month of March or April.

Celebrations of Dasara: The festival of Dasara for Goddess Durga is celebrated with great enthusiasm among devotees at Vijayawada. It is also known as Navaratri and there is Saraswati puja and Theppotsavam celebrated which is very significant. It is a nine-day festival when the Goddess Durga is decorated in nine forms for nine days. A large number of pilgrims gather together to take the holy dip in the Krishna river. A symbolic representation of the 10 forms of the triumph of good over evil, the form (known as ‘Alankaram’) of the day for the Goddess is chosen as per the astrological star of each day, in accordance with the lunar calendar.

There are different poojas and rituals that are performed in the Kanaka Durga temple such as Astothoranam Archana, Sahasra Namarchana, Lakshakumkumarchana  and many more. Accordingly there are different rates that are charged depending upon the number of persons performing the rituals.

How to reach Kanaka Durga Temple?

By Road: APSRTC runs frequent buses from Hyderabad, Kammam, Tirupathi, and Warangal. The nearest airport is, Gannavaram (20km). Bus facility is available to reach Kanaka Durga Temple from Railway station, Bus Stand and Ratham centre for every 15 minutes. If you are in Vijayawada, you can avail the local transportation to reach the temple. The city is served by NH 5 and NH 9 which connects it to cities.

Where to stay in Vijayawada?

A wide range of facilities for accommodation is available In Vijayawada. There are various Three Stars hotels and Guest houses that are available.