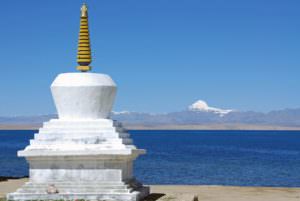 Kailash Manasarovar – The dream of any ardent Hindu devotee is the soul fulfilling spiritual visit, often called as the ultimate pilgrimage is to the abode of the supreme Lord Shiva and Goddess Parvati at Mount Kailash.

The beautiful, calm and mystical Linga shaped peak is located at an altitude of 22,028 feet above sea level. The majestic peak is situated among the Gangdise Mountains, also known as the Kailash Range. The range forms a part of Transhimalaya in Tibet China.

The two mystical water bodies – Lake Manasarovar (believed to have been a creation of Lord Brahma’s mind) and Lake Rakshastal (Lake of demons or Rakshas) lie just beside the peak.

The holy peak is believed to have been worshiped even before the beginning of Hinduism and other religions. It is religiously significant not just for Hindus, but also for the Tibetan religious sect called Bon, Buddhism, and Jainism.

The trek to the base of Mount Kailash is however extremely arduous and risky. The peak is situated in a remote and inhospitable area. Persons willing to have a glimpse of the Mount should be extremely fit and tolerant to altitude sickness and low oxygen conditions. No one is allowed to set foot on the peak. One can only circum-ambulate Mount Kailash or worship it from a distance.

The pilgrimage to Mount Kailash is incomplete without paying respect to the mystical and enchanting Lake Manasarovar. This lake is the situated at an altitude of 14, 750 feet above sea level, making it one of the highest freshwater lakes in the world. The circumference of the lake is 88 km long and its complete circumambulation takes 4-5 days to complete.

The lake is near the source of River Sutlej, and a few kilometers away from the source of River Indus and the Brahmaputra. It is believed that the Lake was once surrounded by eight monasteries. However, only a few are left today, the Chiu Gompa being the prominent one. The lake is one of the 51 Shakti Peethas of Goddess Sati.

The Kailash Manasarovar Yatra is organized by the Ministry of External Affairs, Government of India in co-operation with the Indian Mountaineering Federation every year between the months of May-September.

How to reach Kailash Manasarovar

A limited number of Indian pilgrims are allowed to visit the Kailash Manasarovar every year. They are monitored by the Indian and the Chinese Governments.

There are two routes to reach Mount Kailash from the Indian side. They are mentioned as below:

The Government tours provide accommodation to the pilgrims both on the Indian as well as the Chinese side. The tour cost includes basic accommodation for all the devotees. The Tibetan authorities have constructed small hotels and lodges to facilitate easy movement and rest for the visiting pilgrims. Private packages include a comfortable stay for devotees and camping gear is also provided to whomsoever who wish to stay outdoors.  One can also hire or buy private tents and stay on the banks of the Manasarovar Lake or in the monasteries.

The devotees are served pure vegetarian cuisine during their trip to Mount Kailash and Manasarovar. The cuisine is mainly North Indian or Chinese. Breakfast items are generally Bread toasts, Paranthas or Pooris. Rice is served as lunch. It is advised to carry snacks and dry fruits in the case of emergencies or unforeseen circumstances.