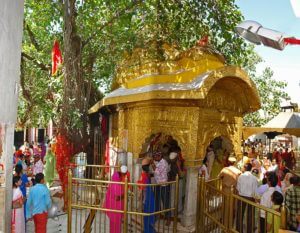 Chintpurni Temple is one of the major pilgrimages in India and also one of the Shakti Peethas. The Chintpurni Shakti Peeth or Chinnamastika Shakti Peeth is in the Una district of Himachal Pradesh. It has the western Himalayas in the north and the smaller Shivalik range in the East.

What is the history of Chintpurni Temple?

The history of Chintpurni temple relates itself to a famous legend. According to it, when Lord Vishnu severed Sati’s body into 51 pieces they scattered all over. He did this to stop Shiva’s Tandava.   So all of the pieces together formed the 51 Shakti Peethas.

People also believe that Pandit Mai Das, a Kalia Saraswat Brahmanestablished this shrine to Mata Chintpurni Devi in Chhaproh village twenty-six generations ago. Over time this village became popular as Chintpurni after the eponymous deity.

What is the significance of Chintpurni Temple?

The significance of Chintpurni temple is that devotees believe that nobody goes empty handed from the shrine of Goddess Chintpurni / Chhinnamastika. The simple structure of the temple contains the main shrine, where the image of Mata Chintpurni is placed in the form a pindi (a round stone).

There are 51 Shakti Peeth associated with the 51 alphabets in Sanskrit. It is believed that Sati Devi’s feet fell here.

What are the Timings of Chintpurni Temple?

Here are the timings of Chintpurni Temple:

Which festivals are celebrated at Chintpurni Temple?

Navaratri is a grand festival that is celebrated with devotion in the Chintpurni temple. People from all over India and abroad come here during this to seek the blessings of Devi Ma. The festival takes place during in Aashadh (July), Ashwin (October) and Chaitra (March–April).

How to reach Chintpurni Temple?

Here’s how to reach Chintpurni Temple:

Some places where one can stay nearby are:

Some of the temples/places that one can visit nearby are: