Ranchi is a historic town of Jharkhand. The  Jagannath Temple Ranchi is a religious landmark of the town. Jagannath Temple is located at 10 km from the main city. Built over a small hillock, you can get a beautiful view of the surroundings from the temple. If tourists are not able to climb the hilltop, they can use the optional vehicle route. The Jagannath Temple is located at the Dhurva region of Ranchi. There are two large water tanks located within the temple complex. Hence if you are tired after walking so many stairs, there is enough space to rest and water to quench your thirst. The  Jagannath Temple, Ranchi is very neat and clean, providing ample space to sit and relax in the soothing environment. There is no entry fee to the temple. 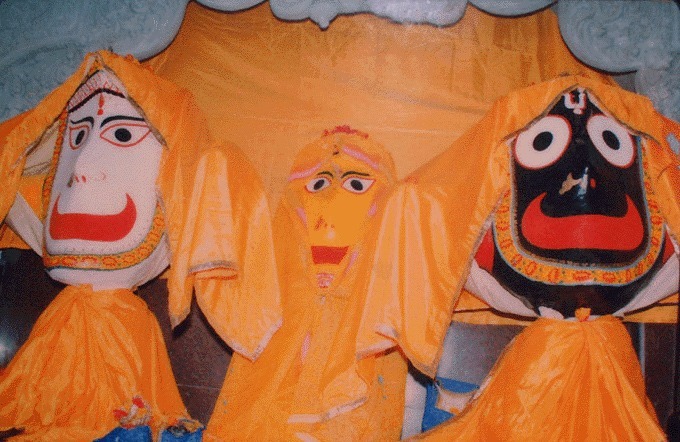 Jagannath Temple is a historical spot of Ranchi.

Significance of the  Jagannath Temple, Ranchi

The temple can be visited throughout the year. Tourists are suggested to visit the temple at dawn or dusk, as the surroundings look heavenly during sunrise and sunset. Summer is considered as the best time to visit the temple as the largest festival of the temple, Rath Yatra takes place at this time.

After worship of the deity, prasadam is served to the devotees. The prasadam is also delivered online by the temple committee, which you can receive 15- 45 days.

Jagannath Temple is the largest shrine of Ranchi. Hence numerous devotees gather here every day to offer their prayers to Lord Jagannath. Almost every day some or the other function takes place at the temple premises.

Rath Yatra: Rath Yatra, also known as the Car Festival, is the prime festival celebrated at the Jagannath Temple of Ranchi. The celebration takes place during the Hindu month of Asadh, on Ashad Shukla Dwitiya. This is the second day of the fortnight of Ashad, which generally occurs during June or July.

During the festival, the deities are brought to Mausi Bari, that is, the home of the aunt. Numerous people follow the journey pulling the ropes of the chariot. This is considered to be a pious act by the devotees. The deities are kept in Mausi Bari for six days. On the seventh day, the chariot returns to the Jagannath temple with the deities. The return journey is known as Ghurti Rath Yatra. Thousands of devotees folk here during the Rath Yatra as it is believed that Lord Jagannath opens His eyes during this time to bless the worshippers.

One of the prime attractions of the festival is that lot of tribal people gather at the annual fair. From folk song and dance to local handicrafts, the Ratha Yatra of Jagannath Temple of Ranchi is more than a religious festival. The annual fair is held for a week and is known as Jagannath Mela.

Kalash Sthapna: Before the main event of Ratha Yatra, events like Kalash Sthapna, Pran Prathistha and Bhandara take place at the temple complex. The eyes of the deities are also painted before Ratha Yatra.

Snan Yatra: This is another auspicious day that is celebrated with great pomp and show at the Jagannath Temple of Ranchi. The event generally occurs on the full moon, known as Purnima during the Hindu month of Jyeshtha, which is May or June. Lots of pilgrims gather at the temple to witness the holy event in which Lord Jagannath, Lord Balaram and Goddess Subhadra are bathed. In this festival each God is bathed with 51 pots (also known as kalash) of water.

Krishna Janmasthami: This is another important festival celebrated at the Jagannath temple. Lord Krishna is considered to be another incarnation of Lord Jagannath. The festival takes place during the Hindu month of Shravan, which is generally the month of August. The devotees fast till the worship proceedings complete in the evening.

The worship of Lord Jagannath at this temple is quite different from other Hindu temple. Here the priests are known as Panda. Devotees can bath in the river and then worship the deity.

By Road: The nearest taxi stand to the temple is Line Tank Rd, Deputy Para, Ahirtoli of Ranchi. Auto rickshaws are the common mode of transport within the city. There are several local buses that regularly ply from different parts of the city to the Jagannath Temple.

Hotels in Ranchi: Where to stay

Ranchi is the capital city of Jharkhand. The business hub of the state has both budget and premium accommodation for travellers.  Tourists generally refer the guests houses maintained by the Tourism Authority of Ranchi, due to the low prices. The Park Inn and Hotel the Raso are the nearest hotels to the Jagannath Temple, located just at 4.4 km. Hotel Palash Residency, Hotel Green Acres. Hotel Emerald, Hotel Jalsa Grand and Hotel Ranchi Ashok are the other options.

There are several eat outs located near the Jagannath Temple. Tourists can relish tasty food here. The Modern Bakery, Shri Krishna Restaurant, Flaves, Bindas Bavarchi Restaurant, Zero Mile Restaurant and Chinar Restaurant are some of the hygienic and popular eateries near the temple.

There are several other temples built near the Jagannath Temple Ranchi.

Besides worshipping at the Jagannath Temple, visitors can enjoy boating at the nearby river.