Elephanta caves is one of the most significant monumental designs of Maharashtra. It not only adds to the beauty and heritage of the state but also contributes to tourism as one of the most famous tourist spots of India.  The famous Elephanta Caves also termed as Gharapurichi Leni or Gharapuri are a set of carved caves situated on Elephanta Island or Gharapuri. The island is positioned on the arm of the Arabian Sea and it consists of two group of caves- the first is a hefty group of five Hindu caves and the second is a smaller group of two Buddhist caves. The Hindu caves encloses rock cut stone sculptures demonstrating the Shaiva Hindu sect which is primarily dedicated to Lord Shiva.

The rock cut architecture of the caves has been dated back to the period in between the 5th and 8th centuries and the identity of the respective original draughtsmen is still in a state of ambiguity. The caves are carved out of solid basalt rock and all these caves were painted beautifully on the past but as of now only the outlines linger.  The main cave was basically a Hindu place of worship untilbastal rock

the Portuguese rule began in 1534. This war led to relentless damage of the caves but were later refurbished in the 1970s and was also designated as the UNESCO World Heritage Site in 1987 to preserve the beauty and glory of the caves and at present they are maintained by the Archaeological Survey Of India. 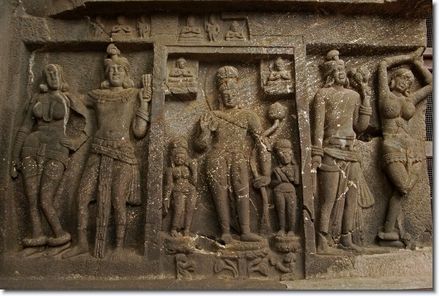 History and Legend of Elephanta Caves

It is believed that no inscriptions on any of the island have been discovered and the ancient history of the island is speculative. As per the legend about the caves, the Pandavas, heroes of the Hindu epic  Mahabharata and Banasura, the demon disciple of Lord Shiva were both ascribed with constructing temples or cut caves to live. It is also a popular belief that according to the local tradition, the caves are not believed to be man made.

The Elephanta Caves do not have a precise date and acknowledgment of their origin. According to Archaeological excavations  few of the Kshatrapa coins date back to the 4th century A.D. According to the historical origin of the caves, the origin of the caves can only be mapped out to the conquer of the Mauryan rulers of Konkan by the Badami Chalukyas emperor Pulakesi II in a sailing battle in 635 A.D.  Following the battle, the Elephanta was then termed as Puri or Purika and was also doled out as the capital of the  Konkan Mauryas.  Some of the historians feature the caves to the Konkan Mauryas and also marked that the caves dated back to the mid-6th century.

The Chalukyas who conquered the Kalachuris as well as the Konkan Mauryas are believed to be the initiator of the main cave by some people in the mid-7th century. The Rashtrakutas are the last pretenders of the main cave which is estimated to the early 7th to late 8th century. It is also believed that the Elephanta Shiva cave to a certain extent bears a resemblance to the 8th century Rashtrakuta rock-temple Kailash at Ellora.

Significance of the Elephanta Caves

Apart from these, the following are the imperative features of the Elephanta Caves:

The major festival celebrated at Elephanta Caves is the festival of Music and Dance which is being organised every year by the Maharashtra Tourism Development Corporation (MTDC) ever since 1989. This festival is one of the major attractions of the Elephanta caves which have the propensity to grab the attention of audience worldwide.  The main emphasize of the festival is the elucidated Maheshmurti which is basically the Shiva idol in the main cave of the island.  The festival also includes group of people performing the Folk dance. These folk dances are executed by the local fisher folk and the ethnic local food assortments add an extra tinge to the vibes of the festive fun. Over the years, the festival has successfully become a major tourist magnetism for the people of the country in particular and the world in general for the incoming domestic and foreign tourists.

By  Rail : Mumbai is one of the major railway junctions and all parts of India are connected with Mumbai. Therefore, trains are always available on everyday basis from Mumbai ,     Bandra or Lokmanya Nagar junctions. Local trains from Chatrapati Shivaji Terminal or Churchgate are also available.

By  Air : The nearest airport to reach Elephanta Caves is the Mumbai Chatrapati Shivaji International Airport.

There are numerous hotels and lodging facilities in and around the Elephanta Caves. Some of them are: